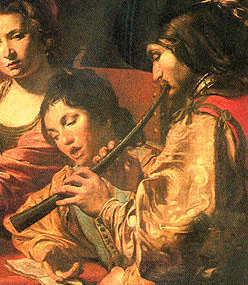 A lot of people have come to me over the years to learn some of the basics of cornett playing (by the way, I prefer “cornett” rather than “cornetto,” since I think the English version of the word is every bit as good as the Italian). After talking about the instrument and the mouthpiece a bit, the student will play something that she has been working on.

Then the subject of phrasing comes up. Although each piece might have some peculiarities of phrasing, I like to start out with these seven guidelines. These are also very helpful in playing on modern instruments, too–in a brass quintet, for example.

These rules of thumb cover 80% of all situations. The other 20% will need either a bit more study into theoretical sources or some thoughtful decision making. 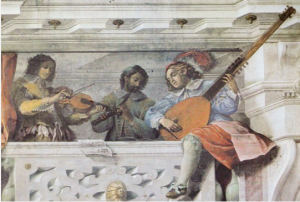 Trompe l’oeil of a gallery of musicians with cornettist