As I mentioned yesterday in “A Look at Two 19th-Century Books of Cornet Music,” All of the pieces in Philippe Goetz’s “solo” book now owned by Dr. Robert Hazen are for F- or G-crooked cornet. It is my guess that the F- and G-crooking were especially comfortable to horn players who wanted to play the new cornet with valves. It is somewhat analogous to a modern trumpet player performing on the B-flat piccolo trumpet: it allows the player to play more securely in the high register. Indeed, Goetz’s duet book includes many duets for horn unplayable by the cornet, so one may surmise that Goetz played horn as well as cornet. Only later in the 1850s, most notably with Jean-Baptiste Arban, did the realm of the cornet begin to shift to trumpet players. Coinciding with this shift, the cornet was more-commonly played in higher keys (like the now-ubiquitous B-flat). 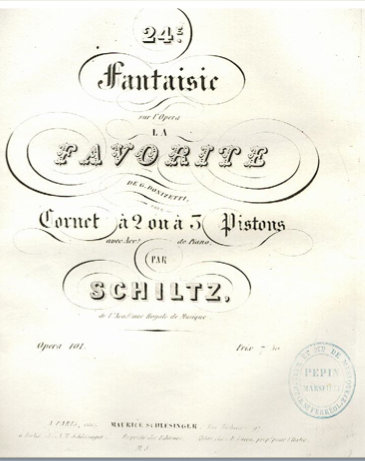 Title page of J. B. Schiltz’s Fantasy on themes from Donizetti’s “La Favorita”

In the solo volume, there are three operatic fantasies written by the Parisian trumpeter, cornettist and prolific composer, Jean-Baptiste Schiltz. One of these solos, arranged for cornet and piano, was based on the opera La Favorite by Gaetano Donizetti. This fantasy, Schiltz’s 101st opus, was composed before 1846 and published by the famous music publisher, Maurice (born “Moritz”) Schlesinger. The title page, shown here on the left, indicates that this solo is playable for the cornet with two or three valves.

There is a fascinating story about the publishing of this piece, because it seems that Schlesinger had first commissioned Richard Wagner to do it. Wagner writes in his memoir, My Life: 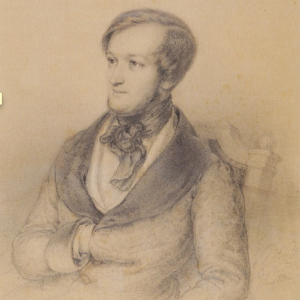 As my contributions to the Gazette Musicale proved so unremunerative, Schlesinger one day ordered me to work out a method for the Cornet a pistons. When I told him about my embarrassment, in not knowing how to deal with the subject, he replied by sending me five different published ‘Methods’ for the Cornet a pistons, at that time the favourite amateur instrument among the younger male population of Paris. I had merely to devise a new sixth method out of these five, as all Schlesinger wanted was to publish an edition of his own. I was racking my brains how to start, when Schlesinger, who had just obtained a new complete method, released me from the onerous task. I was, however, told to write fourteen ‘Suites’ for the Cornet a pistons—that is to say, airs out of operas arranged for this instrument. To furnish me with material for this work, Schlesinger sent me no less than sixty complete operas arranged for the piano. I looked them through for suitable airs for my ‘Suites,’ marked the pages in the volumes with paper strips, and arranged them into a curious-looking structure round my work-table, so that I might have the greatest possible variety of the melodious material within my reach. When I was in the midst of this work, however, to my great relief and to my poor wife’s consternation, Schlesinger told me that M. Schlitz, the first cornet player in Paris, who had looked my ‘Etudes’ through, preparatory to their being engraved, had declared that I knew absolutely nothing about the instrument, and had generally adopted keys that were too high, which Parisians would never be able to use. The part of the work I had already done was, however, accepted, Schlitz having agreed to correct it, but on condition that I should share my fee with him. The remainder of the work was then taken off my hands, and the sixty pianoforte arrangements went back to the curious shop in the Rue Richelieu.

I love this account for many reasons. It shows the young Wagner trying to get his start as a composer by attempting a method book for the cornet. It shows how these operatic salon pieces were conceived (by referencing piano reductions of popular operas). I also note that Wagner’s commission was for fourteen operatic suites. When Schiltz took over the job, he would have presumably completed the fourteen. It is not clear whether Wagner had submitted less than fourteen manuscripts, or whether he had only partially completed manuscripts for all fourteen. What is very possible is that this “Fantasy on the Opera, La Favorite” by Schiltz was conceived by Wagner and transposed to a lower, easier key by Jean-Baptiste Schiltz.