(This is the second part of this series. Previous: Monteverdi’s Symbolic Use of the Cornett: Prerface) 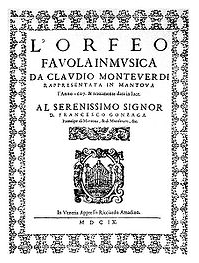 Gary Tomlinson writes that the composers of the Second Practice “were fascinated by the miracles supposedly wrought by ancient musicians, but . . . they remained unfettered by the authority of ancient practice and open to notions of stylistic change through history.”[1] Trying to duplicate these ancient miracles, Monteverdi sought above all else to rhetorically persuade through every possible musical artifice. Mirroring, complementing, and enhancing the text, Monteverdi exemplified the Second Practice. Instrumentation was just one rhetorical device with which Monteverdi affected his audience. Many scholars contend that Monteverdi was far from an orchestrational pioneer.[2]  Yet it is generally acknowledged that he composed at least two works that were exceptional and thought-provoking in their instrumentation and orchestration: the opera Orfeo, and the collection known as the Vespers of 1610.[3] A remarkable instrument appears in both of these works from his Mantuan period—the cornett.

The cornett was an important instrument of its day. Authors such as Castiglione, Cellini, Shakespeare, Marlowe, Jonson, Marston, and even Voltaire wrote about the cornett. Botticelli, Paolo Veronese, Jan Brueghel, and Caravaggio were among the many artists who depicted it. In addition to Monteverdi, composers as renowned as Lasso, Gabrieli, Schütz, Schein, H. I. F. Biber, Fux, Telemann, J. S. Bach, and Gluck wrote music for the cornett.

The cornett stands out as a well-spring of symbolism, due to its evocative physical characteristics, sound qualities, and musical roles. This paper will examine Monteverdi’s own symbolic use of the cornett against a backdrop of general trends in cornett symbology.

(Next: Monteverdi’s Symbolic Use of the Cornett: Chapter 1, part 2)

[1]. Gary Tomlinson, Monteverdi and the End of the Renaissance (Berkeley: University of California Press, 1987), 22.

[2]. For example, J. A. Westrup writes in his article “Monteverdi and the Orchestra,” Music and Letters 21 (1940): 242, “ Monteverdi’s orchestra is quite normal in structure for the period. . . . He employs recognized groups and recognized continuo instruments, and uses them in a way that would have occasioned no surprise among his contemporaries.” Gloria Rose makes a similar case in her article “Agazzari and the Improvising Orchestra” Journal of the American Musicological Society 18 (1965): 383-84, writing that “Monteverdi’s extensive orchestra for Orfeo in 1607 was not unusual except being so specifically described.”  In addition, in his “Liturgical Problems in Monteverdi’s Marian Vespers,” Journal of the American Musicological Society 20 (1967): 101, Stephen Bonta describes Monteverdi as “not a composer of instrumental music, per se. Unlike Giovanni Gabrieli or his other famous contemporary, Girolamo Frescobaldi, Monteverdi’s interest throughout his career lay solely in the problems generated in combining words and music. Even in his Sonata sopra Sancta Maria, obviously instrumental in style and concept, he includes the voice with text.”

[3]. According to Susan Parisi, “Ducal Patronage of Music in Mantua, 1587–1627: And Archival Study” (Ph.D. diss., University of Illinois at Urbana-Champaign, 1989), 164, Orfeo was produced during carnival in 1607 by “Prince Francesco for the Invaghiti Academy on 24 February and for the ladies of the city on 1 March.” Parisi speculates on the possibility of the first performance of the Vespers at the feast of Santa Barbara celebrated in 1610 with music in the ducal basilica (Ibid., 168).