((This is the fourth part of my dissertation series. Previous: Monteverdi’s Symbolic Use of the Cornett, Chapter 1, part 2)

General Characteristics of the Cornett 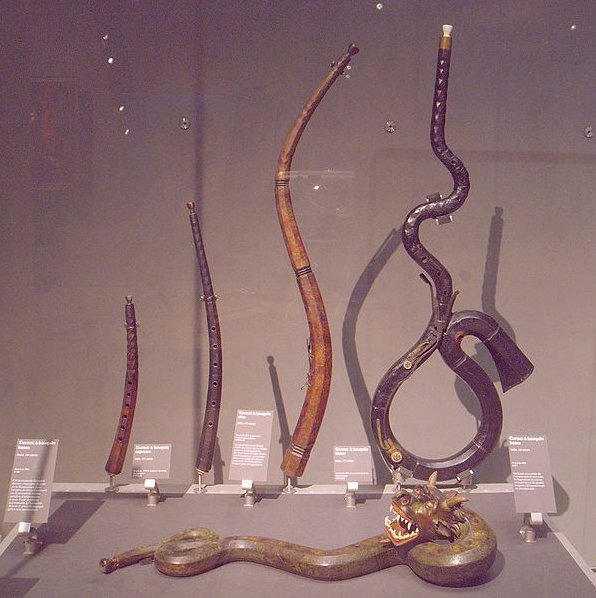 A hybrid instrument according to instrument organology today, the cornett was lip-blown like a trumpet and fingered like a woodwind instrument. The cornett remains an intriguing instrument after (and perhaps in part because of) 250 years of disuse, and modern reconstructions of the instruments are now played in many early music ensembles around the world. 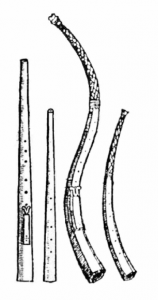 The Treble Members of the Cornett Family

There were three distinct forms of cornett: the straight, the mute, and the curved. The straight cornetts were made only in the treble range and the mute cornetts generally were made in the alto range, and both were made of a single piece of wood, turned on a lathe into a straight form. The straight cornett had a detachable mouthpiece, and its tone was bright and strident. Some researchers have claimed that the straight cornett is the oldest of the true cornetts. Although similar in outer appearance, the mute cornett had a softer and more velvety tone due to a funnel-shaped mouthpiece, carved integrally into the instrument, and a more conical bore in the body of the instrument. The range for the mute cornett was equivalent to the treble or the alto curved cornett. Although the mute cornett was not frequently specified in sixteenth- and seventeenth-century scores, it was commonly used in actual performances, according to many first-hand accounts of important musical spectacles.[1] 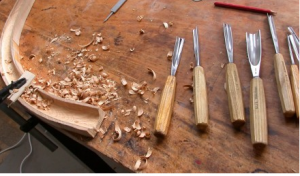 The wooded curved cornett was the most common type of cornett. It was made from a single piece of curved wood and split lengthwise. The two halves were gouged out to form a conical-shaped bore. These halves were rejoined with glue and linen bindings. The cornett maker usually drilled six finger holes and one thumb hole, carved the outside of the instrument into an octagonal profile, and chipped a lozenge-shaped pattern into the neck of the instrument (between the mouthpiece and the thumb hole). The instrument was then covered tightly in leather or parchment to prevent air leakage.

Ivory cornetts, the most difficult cornetts to make, were carved by hand from elephant tusks with highly specialized tools.[2] These rare instruments were curved, often with the same octagonal profile and lozenge pattern as the wooden instrument.

The treble curved cornett had a range approximately from a to d2, about the same range as the violin or an extended soprano voice, which was significant, given the fact the cornett doubled the soprano voice or substituted for the violin in so many sources.  Although a whole curved cornett family existed in the sixteenth and seventeenth centuries, the treble member was by far the most common size. 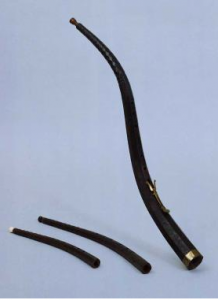 Descant cornett next to treble (?) and tenor

Because the lower instruments of the cornett family were so difficult to play, or perhaps because they were deemed “bullocky” in timbre, the trombone often assumed the role of alto, tenor, and bass in the Renaissance “brass” consort. The trombone family, for its part, could not rely upon an instrument half the size of the tenor (with twice as treacherous slide placement for intonation purposes) for the soprano member of its family. The happy mixture of secure intonation and smooth sound quality in the lower voices, provided by the trombones, together with the virtuosic technique and penetrating tone of the cornett in the soprano voice, proved a very successful ensemble combination for occasions which necessitated a projecting sound, such as processions, outdoor festivities, church music, and some of the larger theatrical productions. 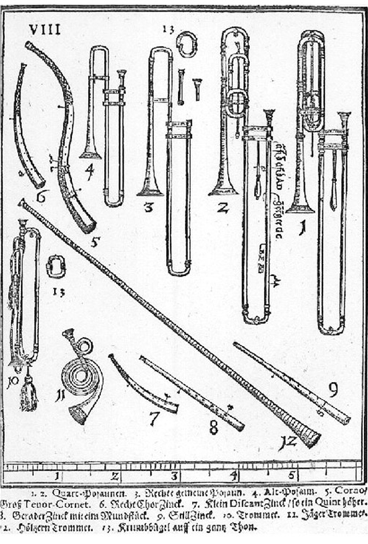 The “brass” family from Praetorius’ Syntagma Musicum. Notice the curved cornetts and trombones are placed in a kind of ensemble at the top.

(Next: Sources for cornett symbolism)

[1]. The mute cornett is found in approximately 4% of all musical sources. For some contemporaneous descriptive accounts of mute cornetts, see Howard Mayer Brown, Sixteenth-Century Instrumentation: The Music of the Florentine Intermedii, Musicological Studies and Documents (Rome: American Institute of Musicology, 1973).