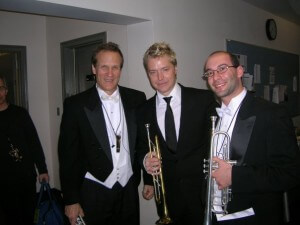 The interviewer is Stanley Curtis
SC: Tell us about your early interest in music.
MB: My early musical interest came mostly through listening to jazz with my father.  Though not a musician, he has amazing taste!  Basie’s Chairman of the Board album was a favorite – I was being introduced to arguably the greatest big band album of all time and early Thad Jones arrangements.  My dad regularly made jazz mix tapes that included Oscar Peterson, Stan Getz, Ella Fitzgerald, and many others.  Sinatra was also a favorite, especially the Capital Records years. 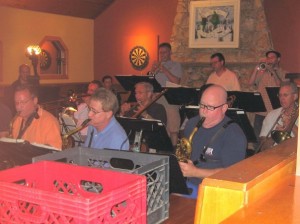 Mike with the Leon Petruzzi Jazz Orchestra at Whoville Bar and Grill on Long Island. Two of Mike’s band directors from East Meadow School District are in the sax section (Joel Levy on the left and Dave Fletcher on the right). Leon Petruzzi is to the left of Mike in the trumpet section.

When I really started showing an interest in music and willingness to practice in middle school, my parents bought me a subscription to the Carnegie Hall Jazz Band, led by Jon Faddis. The trumpeters I got to hear with that band included Lew Soloff, Earl Gardner, Byron Stripling, Randy Brecker and others … absolutely amazing! My parents also started taking me regularly to the Leon Petruzzi Jazz Orchestra; an excellent local big band that continues to play twice per month on Long Island. That band consists of terrific musicians who are mostly music educators from Long Island.

Most of my early interest in music was rooted around big bands. Although I primarily play classical music for a living now, big bands have always been my hobby and first love. I play as often as I am able with the Leon Petruzzi Jazz Orchestra.
SC: Who have been your most influential teachers and mentors?
MB: At every stage of my development, I have been lucky enough to have excellent teachers and mentors who have encouraged and challenged me.
My public school teachers from the East Meadow School District had a tremendous influence on me. Besides being terrific musicians, they are master teachers and were always generous with their time during the school day as well as before and after school. They are incredibly dedicated teachers. In addition to my in-school teachers, Mike Klein and Leon Petruzzi were private teachers who helped encourage solid fundamentals and excitement about performing music.
In my final two years of high school, I also took about one lesson per month from William Vacchiano. It was amazing to play for him, and I taped almost every lesson. The teaching took place then, but I’m learning at least as much from him now and am sure that will continue forever. He was 88 and 89 years old when I studied with him. I’m really glad to have gotten to know him.
I went to the University of Maryland for my undergrad, where I got to study with Chris Gekker and Steve Hendrickson. I first heard Chris as a member of the American Brass Quintet when I was in middle school. His and Ray Mase’s playing had such an impact on me that I really wanted to study with him in college. An added benefit to studying at University of Maryland was also getting to work with Steve Hendrickson, who had a tremendous influence on me as well. Just trying to keep up with him on orchestral rep was lesson enough to try to thicken out my tone! During my senior year at Maryland, Steve invited me to play extra a few times with the National Symphony, a tremendous opportunity and thrill!
After studying at the University of Maryland, I was lucky enough to study with Mark Gould at Juilliard, where I also worked with Ray Mase as a chamber coach.  Both were great mentors and very generous with me.
One of the greatest things about playing in a major metropolitan area is getting to hear terrific musicians regularly (not just trumpeters). I have been fortunate to get to perform with Carl Albach, Lou Hanzlik and John Dent a fair amount; after hearing them, my practicing always gets better for a few weeks trying to emulate aspects of their playing.
SC: Describe the free-lance scene in NYC.
MB: I met with Lou Hanzlik just as I was graduating from Juilliard hoping for some advice on establishing a freelance career in NYC.  The gist of his advice was something to the effect of, “find ways to stay busy, even if it doesn’t earn you much money at first.”  The more I’ve talked with freelancers about their work, I’ve found it to be individual without too many consistent patterns other than figuring out ways to “stay busy.”
SC: How have you “stayed busy” working in NYC?
MB: Ray Mase asked me a tough question sometime when I was at Juilliard, something like, “what do you need in your professional musical life that you are not willing to let go?”  The answer I came up with was, “I need to play with excellent musicians regularly and I need to teach.”  My version of staying busy includes subbing with several orchestras and other groups, teaching, running an arts-in-education program and running a music publishing company with my brother.  It pieces together into a “way-too-busy-all-of-the-time” schedule!
Besides having great teachers, I also had great mentors just a few years older than me at every stage of my development, including today.  In turn, I always liked encouraging people a few years younger than me.  Upon graduating from Juilliard, establishing a teaching studio in my parents’ basement was a quick way for me to earn money doing something I loved doing.  I continue that studio today and have great, hard-working students.
Other teaching includes running an arts-in-education program in my hometown school district, teaching trumpet at Usdan (a terrific arts day camp on Long Island) and coaching at Nassau Suffolk Performing Arts (a Long Island youth concert band and jazz band program).  As you can tell, my teaching tends to be Long Island-centric.  It’s nice to contribute in that way to the community that helped encourage me to pursue my passions as a career. 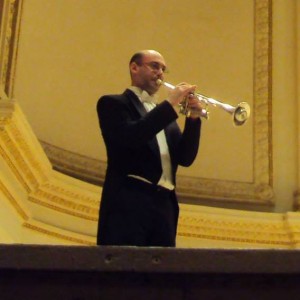 Mike warming up at intermission of an Orchestra of St. Luke’s performance at Carnegie Hall

Over the first eight seasons of my career, I’ve been fortunate to sub with several of the freelance orchestras in, and around, NYC, including the Orchestra of St. Luke’s, American Symphony, Orpheus Chamber Orchestra, Northeastern PA Philharmonic, Stamford Symphony, and others. Between all of them, I end up performing about a half-year orchestra season.  In addition, I’ve enjoyed playing chamber music, with big bands, and as a substitute on Broadway shows.

SC: What are some of your most memorable musical projects?
MB: I am more of a “gun for hire” on trumpet, rather than one who cultivates my own creative playing projects. My creative energies really come out in my teaching. 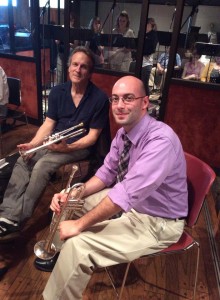 Some of my most memorable musical opportunities have been with Chris Gekker over the past few years.  We performed together with Sting in 2009 and more recently with Richard Alden Clark’s Manhattan Contemporary Chamber Ensemble, where we performed world premieres at Carnegie Hall and recorded at Avatar Studios for a week after.  Getting to spend time in the recording studio with Chris was a special treat for me.

Two recent interdisciplinary Stravinsky programs really stand out, both with the Orchestra of St. Luke’s.  First was Soldier’s Tale performed in collaboration with The Puppet Kitchen for thousands of NYC school kids; 8 performances in one week. Another was a collaboration with Basil Twist (a puppetry company described as “ballet without dancers”) on a program that included Fireworks, Pulcinella Suite, and Jonathan McPhee’s reduced orchestration of Rite of Spring. I’ve always loved interdisciplinary performances. 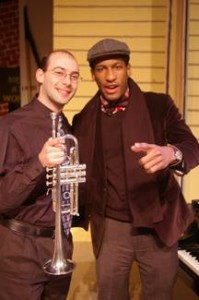 Jon Batiste was a colleague at Juilliard and has since done amazing things with his Stay Human Band. I performed with him in his “Little Big Band” at the Blue Note, Dizzy’s Club, KC Jazz Club, Rubin Museum, for an NPR national broadcast, Central Park’s Summerstage jazz series with Esperanza Spalding, and recorded at Pyramid Studios. Jon and I also did a few educational recitals based around music by Duke Ellington and William Grant Still.  Jon brings intimacy and excitement to every performance, which continues to inspire me. 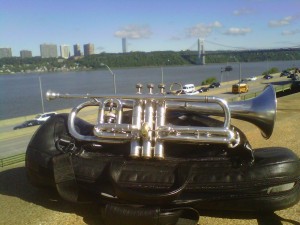 Recently, I have performed and recorded a bit with the Paragon Ragtime Orchestra (on my Conn Victor 1924 Bb/A quick-change cornet). This group performs ragtime, theater music and accompanies “silent” movies. The first CD I performed on featured music arranged by Harry Alford (listen to clips of this CD here).  The forthcoming CD features early cinema music from the “silent movie” era.

There are other really great programs and performances I’ve been lucky enough to play like Elliott Carter’s opera What Next?, an all Kurt Weill / Hans Eisler program at Carnegie with H.K. Gruber, and many others … I have been very lucky so far to have some very cool playing opportunities and hope to continue that into the future.
SC: What are some things that you do other than play the trumpet?
MB: My brother and I started Pinnacle Music Press, a publishing company looking to fill gaps in music education.  Part of this series is Festival Sight Reading, which my brother and I co-authored.  This is the first “job” I’ve had that doesn’t really involve a trumpet up to my face.  I often have to do long tones or lip slurs while I’m doing Pinnacle work just to feel normal!
Outside of music, I’m somewhat “normal”: sports fan (particularly baseball), enjoy following/discussing politics and current events, read (mostly history), long walks around the city, etc.
SC: What would you like to be doing in 5 or 10 years?
MB: My hope is that over the next several years, Pinnacle Music Press develops into a strong business. I believe that our products have a great potential for wide distribution. This is my first business venture outside my playing and teaching and I think it has a great potential.
I want to be a really good musician and teacher, so I need to continually improve my trumpet playing and deepen my musical knowledge and experiences. In these areas, my immediate goals are similar to what they have been to this point. I believe that if I focus on improving the quality of my trumpet playing and musicianship, other good things will follow.
SC: What do you do when you’re not working?
MB: SLEEP!!!
SC: Michael, thanks so much for your time!
No tags for this post.