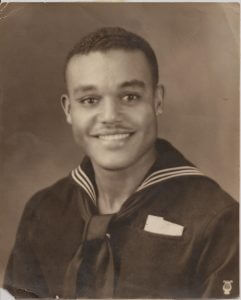 Jewitt Lorenzo White Sr., born on March 6, 1921 in Paris, Texas, was the oldest of four boys born to Viara and Luther White. He began his music studies in Gary, Indiana. 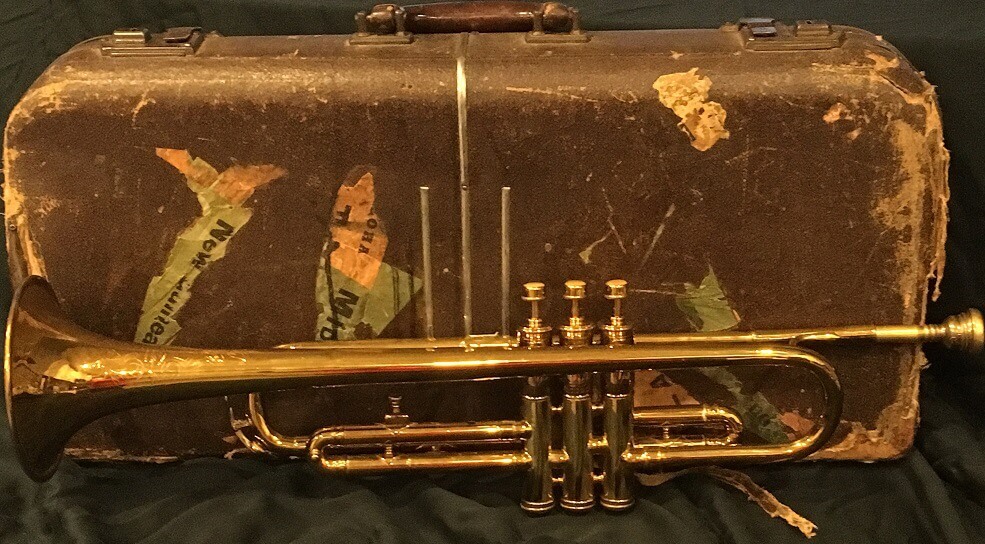 Jewitt’s Conn trumpet and case that accompanied him during his enlistment in the U.S. Navy

After Jewitt’s parents purchased a Conn trumpet for him, he eventually won first chair in the Roosevelt High School band.  He also went on to play trumpet in the band at A&T University (North Carolina) during his undergraduate studies. During WWII, he won a billet in the groundbreaking “B-1 Band” which was the first band in the U.S. Navy comprised of African Americans to serve in a rank higher than messman.

In addition to his other duties while serving in Hawaii from 1942-1944, Jewitt was tasked to play Taps and Reveille on bugle for the Manana Barracks military base.

After the war, Jewitt supplemented his income by continuing to play trumpet with entertainment bands in the evenings (after teaching school during the day). And he continued to play while he worked on his master’s degree at Iowa State University and his doctorate degree at Penn State University, so that he could earn additional income for his family: his wife, Mae Foneville (Mitchell) White; his son, Jewitt L. White Jr.; his two daughters, Ramone White (Woodard), and Mae Rosalind White.

Interview with Jewitt White, African-American trumpeter who played in WWII band, overcoming racial barrier to higher ratings in US Navy

SC: Mr White, this is really an honor for me to chat with such a groundbreaking WWII veteran. How did you get interested in music?

JW: My mother’s brothers were in a high school band. The older brother played tuba and the younger played trumpet. This youngest brother began to teach me how to play trumpet at age 9, teaching me all the scales. Later, he would take me to his high school jazz band rehearsals and encouraged me to play with them.

By the time I was in high school, which was Roosevelt High School in Gary, Indiana, I was playing first chair in the band.

After high school, I went to North Carolina, to attend North Carolina Agricultural and Technical State University. Not only did I study agriculture there, but I played in the band every year.

I also played for weddings and parties while I was a student. These gigs payed really good—sometimes as much as $12-14 dollars for the evening! That was a lot of money back then!

I also met my future wife while I was a student at A&T. Her name was Mae Foneville Mitchell. Her father did not want us to date, because she was so young. She was a very young college student, having started college at age 15. Eventually, with WWII looming over us, we decided to elope.

SC: Who were your early musical influences and teachers?

JW: I loved to listen to Louis Armstrong.  I also liked Walter Carlson’s playing a lot. He was a member of the B1 Band and later became the band instructor at A&T.

SC: Tell me about how you enlisted in the Navy?

JW: I was walking on campus, and I ran into my band director talking to a recruiter for the Navy. This recruiter was retired but he wore his uniform, which had stripes all the way up his arm. I was very impressed. He asked me to come play for him at the band room later that day. So, I came and played. After he listened to me, he told me, “Okay. I think you’ll be just fine!” That’s how I joined the B-1 Band. 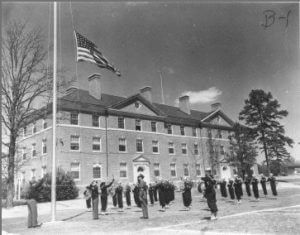 SC: What were some of your most memorable performances as a member of the B1 Band?

JW: Sometimes in band I would play lead, but sometimes I would play solos. We had dozens of tunes in our book, but my favorite piece to play was “Stardust.” I enjoyed soloing on that tune! 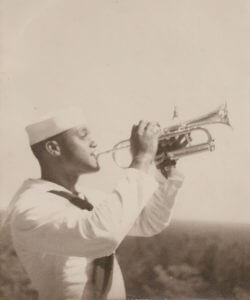 SC: What was it like being a part of the B1 Band?

JW: They didn’t let us stay in the normal barracks, because we weren’t allowed.

Every morning, I would play reveille, and every evening I would play Taps. This was noteworthy, since it was the first time, to my knowledge, that an African American was given the duty or even the opportunity to play these bugle calls. 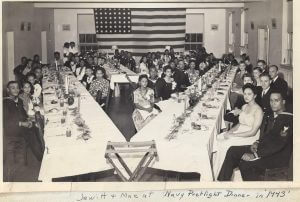 SC: Did you stay in North Carolina for the whole war?

JW: No. They shipped us off to Hawaii.

SC: What did you do after the war? Did you continue with music?

JW: After the war, I went back to school to get my master’s degree at Iowa State in education and agriculture. I also nearly finished my Ph.D. in science at Penn State. And during all this time I played dances to earn additional income. I got a job in Clinton, North Carolina teaching. Then I was appointed professor at West Virginia State, teaching science. Finally, in Gary, Indiana, I was a teacher trainer and then director of vocational education at the Gary, Indiana Tech and Vocational School. I retired in the 1980s.

SC: Because I am doing this interview for trumpeters, I always like to talk about equipment. What trumpet or cornet equipment did you play when you were playing with the B1 band?

JW: My trumpet was a Conn, which my parents purchased for me when I was in high school. The trumpet is still in my family. I loaned it to one of my granddaughters who played it when she was a member of her high school band in the early 1990s. The trumpet is still in great shape and is kept in its original case. It is in the possession of my oldest granddaughter, Jacqueline Woodard who lives in Maryland and works for the government in Washington, DC. 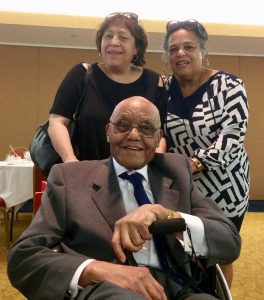 SC: Do you have any advice for the younger generation of trumpeters?

Do the best you can. All the time!