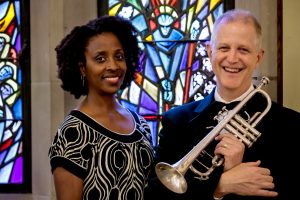 Tia Wortham and me, Stan Curtis

This Friday at 8:00 p.m., EST, at St. George’s Episcopal Church in Arlington, Virginia, I will present a recital with some friends–Tia Wortham, a fabulous soprano, Dr. Ben Keseley, the music director of St. George’s, and Dr. Ina Mirtcheva Blevins, an amazing pianist who is my colleague at George Mason University.

In addition to some unaccompanied pieces for trumpet–“Where are the rests!?!”–and an aria for soprano by Paul Hindemith, we will play three of my own compositions.

For more than 10 years now, I have been composing pieces based on stained-glass windows at my church, St. George’s Episcopal Church in Arlington, Virginia. This summer, my efforts have culminated with a recording project in the nave of St. George’s, where I have been collaborating with some of my close music colleagues to record five of these compositions, each of which relate to the themes and artwork of the windows. The particular themes for these five are the stories of creation, Daniel, Epiphany, the Crucifixion, and Judgement Day. Sunlight, streaming through St. George’s windows, breaks into a prismatic rainbow, and for this reason, I call this group of compositions “Refracted Light.” Refraction, referring to the bending of light, such as in a prism, also speaks of my spiritual path, which has bent, and changed directions, finding me where I have been when I came to St. George’s and leading me to truer, more spiritual directions.

The short piece for soprano, trumpet and piano, called “Without Form,” is the musical setting for the Creation Window, and is my earliest of these window compositions. But the music started with a different text from a poem by T.S. Eliot called Little Gidding. After reaching out to the T.S. Eliot estate for permission, I was told that they do not want his poems set to music, so I was left with a song that needed new words. I turned to the creation story from Genesis, loosely paraphrasing with an eye to making a piece that musically depicted the Creation Window at St. George’s. Some of the music had to be changed, but I think the overall result was effective. Soprano, Tia Wortham, sang both versions of this piece and has continually helped me to better understand the craft of setting words to music. Indeed, many refinements of the text setting come directly from her not only for this piece, but for the other two vocal pieces in this album.

My Epiphany Window composition is derived from a concerto for trumpet and orchestra called Night Passages, which was my first multi-movement work for soloist and orchestra. This current version has only piano accompaniment. I play three instruments: flugelhorn for the first movement, B-flat trumpet for the second and third, and piccolo trumpet at the end of the third movement. It presents three different perspectives from the Epiphany window, which is depicted at night. The first movement of my composition is called “Night Fall: What the Stars and Camels Say” which musically represents the beginning of the evening, as the sun goes down and then the stars come out; “Night Walk” presents a frightening nighttime sojourn, and is subtitled, “The Magi Journey by Night”; and, finally, a Latin setting transports us in “Night Club; Dancing with Gold, Frankincense and Myrrh.”

“Night Fall” begins with overlapping melodies and some shimmering figuration, depicting a spectacular sunset. The introductory lyrical theme, played on flugelhorn, features the downward melodic interval of a third. This opening theme gets lower and the accompaniment gets darker until “stars” begin to appear. Then the main theme of this movement appears, which originally began as a melody written for my son, who plays violin, as a kind of lullaby. The cadenza, normally an unaccompanied part of a solo composition, here is accompanied by piano. This effect is intended to evoke an ancient poet punctuating his verse with the strumming of a hand-held harp. Although I did not directly borrow from his work, Vaughan William’s Lark Ascending was an inspiration for this movement. In addition, much of the material is derived from Dizzy Gillespie’s “Night in Tunisia” and J. S. Bach’s “Gute Nacht, o Wesen,” the eighth part of his Cantata 64. And actually, the melodic material from these two pieces, as well as the opening theme of this movement, gets reused throughout the other two movements.

The next movement, “Night Walk” opens with a short and frightening motive that frames the repetitive and initially-relaxed bass line, over which I play long phrases, often interrupted by unpredictable outbursts. The bass line becomes more and more unstable until rhythmic and melodic chaos breaks out, representing a run from terror—possibly the fear that the Magi surely had of King Herod, or the panic Herod had when he heard of the prophecy of Jesus’ future as king of the Jews. After the framing motive returns, relative peace is restored to the end of the movement. Structurally, this movement traces the root structure of one chorus plus the interlude of Gillespie’s “Night in Tunisia.” In general, each chord change in the original jazz standard is spun out over ten bars in my piece. Melodically, much of the melodic material is drawn from the bridge of Gillespie’s composition, while incorporating Bach’s “Gute Nacht, o Wesen” from time to time. The movement finishes with the overlapping melodic sweeps that lead directly into the third movement.

After a short outburst from the piano, the trumpet introduces the melody, drawn from the main theme of “Night in Tunisia.” I used traditional Latin figurations, such as the “montuno,” derived from Cuban music, to make this movement feel like a salsa tune. The middle of the movement takes a brief look backwards to the opening melody of the first movement before launching into a small baroque-like counterpoint section. At the end of this short movement, I switch to piccolo trumpet with a variation of the main melody played in harmony with the pianist’s right hand.

In 2012, I began to compose Advent, which, despite its name, is the piece I wrote to go with St. George’s Crucifixion Window. I was greatly moved by a poem of the same name by the American Poet Laureate Donald Hall. My intention was to provide a “Trinity” of variations for each of the three stanzas (three flexible interpretations based on the concepts of the Father, the Son, and the Holy Ghost). Each stanza, therefore, has a set of three variations, making a total of nine iterations of the melody first sung at the beginning by the soprano. Regarding the text, “rood” in the first stanza is a cross; “Tenebrae” in the second stanza refers to a Christian religious service celebrated during Holy Week marked by the gradual extinguishing of candles; “Horror vacui” in the third stanza literally means “fear of empty space” and usually describes artwork which fills the entire space with visual detail. The original version of this extended aria featured an extremely unsettling phase-shifting mixed-meter melody between trumpet and piano with soprano singing in the rests, in an effort to imitate the artistic meaning of “horror vacui”, but an alternative, lyric, ending proved more effective in the long run.