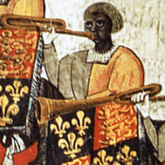 February is Black History Month, and I wanted to feature black trumpeters this month. Black trumpeters are particularly under-represented in bands and orchestras, so I would like to start with a historic African trumpeter, who was successful in Tudor England.

Henry VII and VIII employed a black trumpeter named John Blanke. The speculation is that he came to England as one of the African attendants of Catherine of Aragon in 1501. He was paid 20 shillings a month and successfully petitioned Henry VIII for a raise with a confidently-penned letter. Henry VIII even sent John a wedding present when he later married.