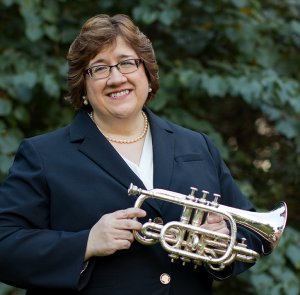 Known for her versatility and probing musicianship, Elisa Koehler is a trumpeter, conductor, and author with professional experience as both a soloist and an ensemble musician. Currently Chair of the Music Department and Professor of Music at Winthrop University, she was previously Professor of Music and the Director of the Center for Dance, Music, and Theatre at Goucher College in Baltimore, Maryland and Music Director and Conductor of the Frederick Symphony Orchestra. As a trumpeter, she has performed with the Baltimore Chamber Orchestra, the Dayton Philharmonic Orchestra, the Knoxville Symphony Orchestra, the Lyric Brass Quintet, and as the solo trumpeter of Baltimore’s Bach Concert Series. Dr. Koehler has performed and recorded on period instruments with the Bach Sinfonia, the Handel Choir of Baltimore, the Washington Cornett and Sackbut Ensemble, and Newberry’s Victorian Cornet Band. A member of the editorial staff of the International Trumpet Guild Journal since 2002, she was elected to the ITG Board of Directors in 2017 and elected ITG Secretary in 2019. Also an active researcher, Elisa Koehler is the author of Fanfares and Finesse: A Performer’s Guide to Trumpet History and Literature (Indiana University Press) and A Dictionary for the Modern Trumpet Player (Rowman & Littlefield). In 2016 she edited new performing editions of the Haydn and Hummel trumpet concertos with historical commentary for Carl Fischer Music. She can be heard as cornet soloist with Newberry’s Victorian Cornet Band on the album, Thomas Coates: The Father of Band Music in America.  Dr. Koehler has presented at national and international conferences, and produces the YouTube channel, Brass from the Past, which features educational videos concerning historic brass instruments. Her articles have appeared in numerous publications including the Conductors Guild Journal, Heritage Band Encyclopedia, The Brass Herald, and The New Grove Dictionary of American Music. She also keeps a blog with interesting articles about academia, music making and trumpet-related things. Elisa Koehler earned a doctorate in orchestral conducting from the Peabody Institute of the Johns Hopkins University, a master’s degree in trumpet performance from the University of Tennessee, and bachelor’s degrees in both music education and trumpet performance from Peabody. In 2009 the University of Tennessee honored her as a Distinguished Alumna and in 2014 she received Goucher College’s highest faculty honor, the Caroline Doebler Bruckerl ’25 Award, which honors an exemplary faculty member in the areas of teaching, scholarly activity, and service.

Interview with Elisa Koehler. The interviewer is Stanley Curtis.

SC: Elisa, it has been almost nine years since our last Trumpet Journey interview, and a lot has changed! I thought it would be good to catch up on what has been happening to you since that time, so I am really grateful that you have agreed to another interview!!

EK: The pleasure is all mine, Stan. Thanks for the invitation! I’m really honored.

SC: What are some of the changes that you have gone through since 2012—your job, your research, your trumpet playing?

EK: In 2013 I became chair of the Music Department at Goucher College (it was my turn in the rotation), and everything changed. The focus of my career shifted from performing to administration, which was something of a natural progression. I started out as an adjunct while conducting a community orchestra (the Frederick Symphony) and juggling a lot of trumpet freelancing and private teaching. As I moved up through the ranks at Goucher and eventually earned tenure, I gradually reduced the amount of freelance work and private teaching to focus on my increasing responsibilities at the college and my writing projects. The organizational leadership skills I had developed as a conductor translated easily to academic administration. During that same year (2013-2014), I was finishing the edits on my first book while writing my second book and simultaneously managing a major facility renovation at the college. It was insane! But I’m grateful for all the opportunities and have always subscribed to Billie Jean King’s philosophy: “pressure is a privilege.” Three years after that I was promoted to full professor and became the director of Goucher’s new Center for Dance, Music, and Theatre as the college consolidated academic departments. In 2019 I moved on to become the chair of the Department of Music at Winthrop University, which is where I am now. I’m extremely grateful that I have been able to combine trumpet playing, conducting, and research in my academic career.

SC: In 2012, you told me in our interview that you were working on some books that you mentioned in our interview. Since then, published them and some other things, too. What has the impact of that been on you?

EK: The books have been well received, especially Fanfares and Finesse, which is required reading in many university trumpet studios now. I am really proud of that. I was also invited to edit new editions of the Haydn and Hummel trumpet concertos for Carl Fischer Music in 2015, which was a huge honor, and I have given presentations at international conferences of the ITG and the Historic Brass Society. But the biggest reward has been the number of people who have written to me or have come up to me at conferences to tell me how much they enjoyed my books. That means the world to me.

SC: It means a lot to us, too, Elisa—thanks for your books. A big congratulations on your new job at Winthrop University and your leadership role. Could you talk about transitioning from Goucher to Winthrop? Did this require new skills?

EK: Thanks! The biggest challenge was relocating to South Carolina after having spent most of my life in Maryland. I also had to get up to speed with several university-specific online platforms for curriculum revisions, personnel management, academic records, and assessment. Getting to know my new colleagues and the culture of the university was crucial, and I have also upped my game with Microsoft Excel, an essential tool for academic administrators. Michael Watkins’s The First 90 Days, a standard book on leadership transitions, was helpful preparation, as well.

SC: What is your routine like at Winthrop? Does your schedule allow for trumpet playing and teaching? How has the COVID-19 pandemic affected your department?

EK: I am primarily an administrator now and only teach one class, which is conducting the Winthrop Symphony Orchestra. My routine involves a lot of meetings, responding to email, and working on long range projects including curriculum revisions, course schedules, facilities, and budget planning. I also observe classes for colleagues’ faculty reviews and supervise recruiting and community outreach. Winthrop has an excellent trumpet teacher, Dr. Marisa Youngs, so that is not what I do. However, I have given occasional trumpet master classes and recitals, but the pandemic has put a stop to that since March 2020. The impact of COVID-19 has been enormous. I have had to re-think every aspect of how we deliver our curriculum and serve the needs of our students. In addition to creating sanitizing protocols for practice rooms, supporting remote instruction, and planning for social distancing, we have had to change every aspect of how large ensembles function, especially regarding facilities, including outdoor tents. But the biggest challenge has been creating a live stream system for our degree recitals and video recordings for ensembles.

SC: I was really fortunate in 2019 to get to play under your baton in Newberry’s Victorian Cornet Band. Playing on your cornet, as well! It was a great experience at the Vintage Brass Festival. What else are you conducting these days?

EK: Thanks! That was a lot of fun. I love working with the Newberry Band, which is a period instrument group that specializes in music from 1875 to 1910. Our second CD will be released next month. I’m super excited about that because it will be my first recording credit as a conductor. I was the cornet soloist on the band’s first CD, which was directed by Doug Hedwig. Right now, I’m conducting the Winthrop Symphony Orchestra at the university.

SC: For the past few years, you have also become a leader in the International Trumpet Guild. What has that been like?

EK: It has been a privilege to work with so many terrific colleagues from all over the world. The ITG leadership team is an inspiring group of selfless, hardworking professionals. We were already meeting quite often by video conference before the pandemic, so it has been interesting to see all the innovation and forward thinking the ITG has engaged in recently, especially making all the back issues of the ITG Journal accessible online for members. And the virtual conference this summer is going to be fantastic!

SC: What would you like to be doing in the next few years, Elisa?

EK: Filming more episodes for my YouTube channel, Brass from the Past is a big priority. I have seven episodes already scripted to cover the cornetto, vented Baroque trumpets, cornets, and other topics, but the demands of my new job and the pandemic have put those plans on hold for the time being. I’m also working on a new project with Tim Quinlan at qPress to create an anthology of Arban’s “Art of Phrasing” collections (he published more than what appears in the famous method book). Another major goal is to publish a second edition of Fanfares and Finesse with updated information and new chapters on mutes and trumpets of antiquity. There has been some fascinating new research in that area.

SC: Down time—what do you like to do these days in your free time?

EK: Practicing the violin, learning French, and lots and lots of reading.

SC: The violin?! Et le Français? C’est incroyable! That sounds like fun! Here at CSU, we’re so much looking forward to hosting you via Zoom next week. What are you going to talk about to our students?

EK: I’m going to discuss my research on Arban’s “Art of Phrasing” as a window into cultural history and related topics, such as research techniques and musical interpretation. I’m excited to meet with your students!

EK: It’s been my pleasure. Thanks for the invitation!

1870 Oskar Böhme, German cornetist and composer, at 15 traveled as trumpet soloist, settling in Hungary to play in the opera orchestra, studied composition in the Leipzig Conservatory, traveled to Russia to play in the Mariinsky Theater Orchestra and stayed in Russia, in 1936, arrested by Stalin because of German heritage, born in Potschappel, Germany.
1955 Galindo Rodriguez, American trumpeter, principal trumpet of the Boise Philharmonic, taught part-time at Boise State University, professor with focus on jazz at Northwestern State University in Natchitoches, Louisiana, born in Weslaco, Texas.
1959 John Thomas, American trumpeter, studied at Indiana University and then on Rotary Graduate Fellowship studied in Europe, toured Europe with Porgy and Bess, versatile performer in the NYC area, member of The Chestnut Brass and Modern Brass Quintet, active soloist, born in Springfield, Ohio.
2007 Burt Collins, American trumpeter, played with Neal Hefti, Woody Herman, Dizzy Gillespie, Quincy Jones, and others, studio musician in NYC, died in New York, New York.
2011 Jens Winther, Danish trumpeter, composer and bandleader, soloist and composer with the Danish Radio Big Band, moved to NYC to join the Jazz Composer's Workshop, in-demand freelancer, composer of two trumpet concerti, founder of the JW European Quintet, the JW Electrazz and the JW Berlin Quintet, winner of many awards, died in his sleep at age 50 in Geneva Switzerland.