Interview for Trumpet Journey on March 18, 2013. Stanley Curtis is the interviewer. 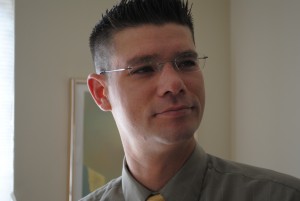 Josh Cohen has been a greatly sought after principal/solo baroque trumpeter in leading North American Early Music Ensembles for almost 15 years. As J. Reilly Lewis states, “Josh proves his mettle time and again as a master of Baroque rhetoric and stylistic abandon.” Josh most recently once again played Bach’s Mass in B minor along with the Washington Bach Consort which was given a terrific review in the Washington Post. Since December of 2009, he has played Messiah at the National Cathedral. 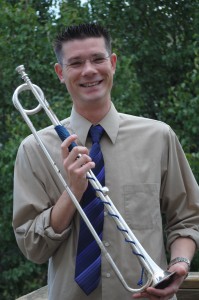 SC: Josh, thanks for taking the time to do this interview! First of all, could you tell me about your early music education?

JC:   I went to the New England Conservatory in Boston for most of my undergrad.  Here I studied full time with Fred Holmgren.  Fred at that point was the go-to guy (in my opinion) in North America for learning anything about what a baroque trumpet could do.  His flutelike tone and lack of the normal bright and brazen “trumpety”-like sound really had me hooked.  While studying with him at NEC, I learned many of the excerpts I now have to perform with professional groups.  He had me learn them in basically real time, i.e., counting rests and taking time between movements.  He also taught me that the there were in effect two different types of playing you would do on the baroque trumpet:  Fanfare-type things…..and Everything else!  This everything else turned out to mean playing the musical lines with shape.

For graduate school, I went to study at McGill University.  Here, I learned that listening to and learning other instruments, besides brass ones…….made me a real musician.  I think I learned more about baroque style in Montreal than anywhere else.  Listening to and being coached by players like Chantal Remeillard (baroque violin), Claire Guimond (baroque flute), Hank Knox (harpsichord) and Washington McClain (baroque oboe) really shaped, for lack of better words…the player I have become.

SC: How did you get interested in the baroque trumpet?

JC:  When I was about 7 or 8, my father and I listened to David Munro’s “History of Renaissance Instruments” special that was on the radio.  It was at this early age that I wanted to play early instruments.  His radio-documentary opened my eyes to all of the other instruments that were around playing all the music that was transcribed for brass groups.  I wanted to play the actual instruments or at least copies that more closely resembled what might have been heard when the music was actually composed.

SC: How do you approach the baroque trumpet in terms of style and aesthetic?

JC:  I approach the baroque trumpet as if I were playing any other instrument from the baroque era.  I treat each piece differently as each piece has different reasons for being written.  Musically speaking, I always try and make a musical line. Composers from this era almost wrote implied ebbs and flows directly in the music.  Lines all need to have a contour and shape that reflect the character or mood of the piece. As counterpoint is paramount to this style of music, clarity of the actual notes is imperative.  No slurs should be overdone as to not “muck up” the counterpoint and harmony.  What you might think sounds wonderful and musically pleasing right in front of you might sound like total mush in the back of the hall you might be playing. The trick is to find the balance of musical shaping and strict counterpoint.

SC: What are your most memorable projects?

JC:  Some of the most memorable projects must include:  Recording J. S. Bach’s Brandenburg #2 with Ensemble Caprice.  The roar of the crowd after performing Messiah at Lincoln Center with Trinity, Wall St.  Performing any French baroque music under the direction of Herve Niquet.  Christmas Oratorio with the Washington Bach Consort.  The B-minor Mass concert for New York after Hurricane Sandy–again with Trinity Wall St.  And finally….one of the Brandenburg concerts I recently did with Apollo’s Fire in Cleveland that must of been one of my personal best live performances ever of that piece.

JC: These are some of the pieces I’d love to play if I ever got the opportunity:  Samuel Endler, Sinfonia in F,  Telemann, Tafelmusik.  I would love to record a solo baroque trumpet CD.  This is actually in the works……

SC: Well, we can’t wait! I’m sure it will be amazing! I’m curious–who do you listen to for inspiration?

JC:  I listen to mostly sting players for inspiration.  Some of those would include: Chantal Reimeillard, Elizabeth Wallfisch, and Olivier Brault.  I also thoroughly enjoy listening to singers. Some of these include Emma Kirkby, Shannon Mercer, Charles Daniels, Matthew White and Dan Taylor.

SC: How have you developed your professional connections and reputation?

JC:  I have always tried to play well for anyone I am asked to play for…..that is first and foremost.  It is always advisable to be social and mingle with all orchestra and chorus members.  You never know who is sitting where and who might be able to use you if they like what they hear. Getting to know the conductors and most notably the continuo players is always helpful in cultivating more work for yourself.  I don’t normally actively seek new work.  I receive random phone calls and e-mails from people who have heard others who have played a gig with me somewhere.  The advent of technology to promote one’s self is invaluable.  I have just about finished revamping and updating my website now called Joshcohenbaroque.com. I’m sure this may come of some use to me.  I hope so at least!  As far as reputation is concerned, I have learned that being humble in the face of both compliments and criticism is the best coarse of action.  Trumpeters have enough of a reputation or at least the stigma of one.  I certainly do not wish to add to that.  For me, there is an enormous difference between confidence and arrogance.  Whilst playing some of the first/solo parts for baroque trumpet….you had better be a confident person. Arrogance has no place……..

SC: What is your method for learning a new piece or dusting off an old one?

JC:  While there are many pieces I do not know……I rarely get to play any of them.  On the rare occasion I do have an unfamiliar piece to learn…..I start working on it in order.  This way….you can get a real feel for how this piece will affect endurance in a  real life concert situation.  Once I get the notes in my ear…..I practice all movements faster and slower than I think that any conductor will want them.  This way, you’ll be prepared for anything.

As far as dusting off old pieces……I have a pretty decent memory for music.  I play many recitals and famous works for the baroque trumpet from memory.  I have even done the entire Bach B-minor Mass from memory.  Once you’ve played a piece a certain amount of times…….unless the conductor wants something completely different……you don’t really need the music. I find that I love knowing the piece from every angle and really need to find out where my part fits into the texture of the fabric that makes the music unique.  When I prepare Brandenburg…..I make sure that I can get through the piece with rest for the second movement AT LEAST 2 times daily.  Then I work on other things usually in D to keep the chops in as best shape as they can be.

SC: What do you do when you’re not playing the baroque trumpet?

JC:  When I’m not playing the baroque trumpet, I enjoy spending time with my wife Samantha and daughter Noelle and a soon-to-be Cohen #2!  I also enjoy playing tennis, hiking, and watching NHL, NFL and Baseball in October when it becomes interesting.