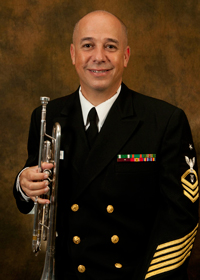 Senior Chief Musician Robert Couto, a native of New Bedford, Mass., joined the Navy Band in 1992.  He earned a Bachelor of Music from The Hartt School of Music in 1989 and a Master of Music from The Juilliard School in 1991.  He has performed with the Hartford, New Haven, Maryland and Annapolis Symphony Orchestras as well as the Berkshire Opera Company, and has also appeared with notable conductors Leonard Slatkin, Kurt Masur and Zubin Mehta.  Couto is a former member of the Fairfax Symphony Orchestra and the George Washington Faculty Brass Quintet.  His teachers include Ray Mase, Chris Gekker, Roger Murtha and Tim Morrison.

SC: Thanks for agreeing to do this interview, Bob! First of all, could you describe your job with the U.S. Navy Band?

RC: As Principal Trumpet and Section Leader with the Navy Band, I manage the personnel issues and duty assignments for a 14-member section and perform as principal trumpet.  In the concert band, we typically have rehearsals every morning and a concert at the end of each week.

On a busy week of ceremonies or a week with no concert, I am scheduled to perform with the ceremonial band.  That can be anything from a White House ceremony to funerals at Arlington National Cemetery. We have two rotations at the band that switch between doing ceremonies one week to performing with the concert band the next.

SC: What was your Navy Band audition like, and how was it different from other auditions that you have done?

RC: My Navy Band audition was a great experience.  It started with submitting a resume and tape like many other auditions.   I was then selected to audition in Washington D.C. a couple of months later.  Unlike the orchestral auditions that I have taken, the Navy Band audition was performed entirely on B-flat trumpet and one solo on cornet.  After spending several years of working on orchestral excerpts preparing for auditions, I had to switch gears and begin working on band literature and style.  The audition was two rounds and lasted the entire day.  The first round was like any other starting with a solo and then playing several excerpts behind a screen.  The second round was a bit intimidating.  When I walked out to the stage I found myself looking at 16 Navy Band trumpet players waiting for me to begin.  After 20 minutes of excerpts, sight-reading and section playing, it was over.

Now at the Navy Band all rounds of the audition are held behind a screen.  Like many auditions we start the process with candidates submitting resumes.  We no longer have a tape round; qualified applicants are then invited to D.C. to audition.

SC: What are the physical demands of being principal trumpeter in the Navy Band?

RC: Being principal has been a great experience for me and has challenged me to be a stronger trumpet player.  The one thing that I had to work on was my pacing and endurance for a long concert.  I want to be sure that I can give the conductor what he wants at any time during the show.  There are times when a different mouthpiece or even a different horn is needed. I am also very fortunate and honored to be part of a great section; I know that I can pass down a first part at anytime and it will be covered.

SC: What is tour like with the Navy Band? Are there special considerations when you prepare for, and go on tour?

RC: Tour is one of the things I enjoy and look forward to every year. It is great going out to different parts of the country meeting and performing for people that don’t get a chance to hear a military band.  Playing a concert every night for a couple of hours can be lots of fun but also very demanding. We typically travel on a bus everyday and perform in the evening; doing this for a few weeks can throw off your normal routine.  I start to prepare for tour several weeks before we leave by building up my endurance. That routine consists of etudes, flexibility exercises and running the program.  While out on tour, my routine changes depending on which program we are playing that night.

SC: What are your top five highlights, so far, in your Navy Band career?

RC: I think being selected as principal trumpet and being promoted to Senior Chief are up there as top in my career.  Recording Strauss’s “An Alpine Symphony” with the band in 2011 was lots of fun.  I was a member of the Brass Quintet for 16 years, performing with great musicians. I will never forget those performances.  Stan, performing your trumpet ensemble arrangement of Shostakovich “Festive Overture” at ITG was great!

SC: What are some recordings that are good examples of your playing?

RC: Navy Band recording of “An Alpine Symphony” on the Derivations cd from 2011.  In 2002 the Navy Band recorded a chamber cd, which included the Brass Quintet of which I was a member at the time.

SC: What was your musical education like, and how did it prepare you for your job?

RC: I had a great musical education and I believe the instructors I had helped me prepare for this job. While at the Hartt School of Music and The Juilliard School, I had the opportunity to perform in many of the ensembles from the jazz band to the orchestra.  I believe that a student needs to try and play every style of music while in school to help prepare them for any job they called to do.

SC: What trumpeters, or other musicians have been models for you?

RC: There are several trumpeters that have been models for me.  All of my teachers have been great, starting with my teachers at home in Massachusetts to my teachers in college (Joe Ribeiro, Jack Martin, Roger Murtha, Ray Mase and Chris Gekker).  I am so fortunate that they and my parents supported me and helped me get to where I am today.

SC: What are some recordings that you keep coming back to?

RC: I always go back to Chicago Symphony’s live recording of Mahler 5 with Solti Mahler 7 with Bernstein and any New York Phil recording with Phil Smith. Lately I have been listening to Miles Davis’ “Sketches of Spain”.

SC: When you look into your crystal ball, what would you like to see yourself doing after your marvelous Navy Band career?

RC: I would like to continue playing in and around the DC area and also get back into private teaching.  Maybe I’ll get back to the orchestral excerpts and take a few auditions. I am looking forward to spending time with my wife Andrea and daughter Samantha and also working on my tennis game.

SC: What is your advice for a young trumpeter who would like to be in the Navy Band?

RC: Practice!!!  Listen to many recordings and take lessons with different teachers. Work on different styles of music and record yourself practicing.

SC: Thanks so much for your time, Bob!

RC: Thank you Stan for the opportunity.