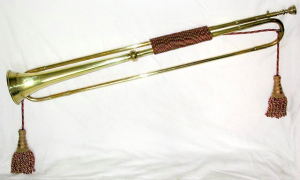 That next summer, I attended the very first Natural Trumpet Making Workshop in Bloomington, Indiana. At this workshop, I made my own baroque natural trumpet using principles that Dr. Robert Barclay had learned from studying and measuring many specimens while he was curator of instruments in the German National Museum of Nuremberg. I made a copy of an instrument made by Hanns Hainlein in 1632.

I haven’t used this trumpet very much outside of my own practice room up to now, because it’s pretty difficult to play accurately (because all of the notes in the melodic upper octave are so close to each other) and, like all truly natural trumpets, the high “F” and “A” (11th and 13th partials) are out of tune from the scale. Back in the 17th and 18th Centuries, however, this type of instrument–the natural trumpet–was the instrument used by all professional trumpeters. Almost all of these trumpeters confronted the limitations of their instruments by developing extraordinary control and embouchure strength so that they could bend notes to suite the intonation that they were using. It’s likely that some inventive types of trumpeters experimented with a few different means to achieve better intonation and more notes than the natural trumpet “harmonic series” could provide. But these trumpeters were in the extreme minority and, by virtue of their altered instrument, were not allowed to be in the Imperial Trumpet Guild, established in 1623, and written about in length by Johann Ernst Altenburg in his Trumpeters’ and Kettledrummers’ Art (1795).

Four different ways of confronting these limitations were either rarely mentioned or never documented (but still conceivable in that time-period): 1) the baroque slide trumpet–a single slide fitted into the first yard of the instrument. This instrument was mostly used in church to double simple chorale melodies in the low register. There is no documented evidence that this technique was used for high “clarino” playing (virtuosic high-register playing). 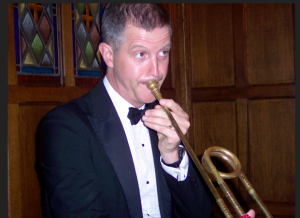 2) the English “flatt” trumpet specified by Purcell in his Music for the Funeral of Queen Mary. This instrument had a “double” slide (like a trombone) fitted between the second and third yards. The slide was moved backwards away from the bell with the left hand. 3) fingerholes are rather obscurely mentioned by Altenburg–he had heard of a trumpeter named Schwanitz from Weimar who had one hole with a leather slider over it. But the main message of Altenburg was that nearly all other trumpeters played a trumpet without any inventive additions to it–just a natural trumpet. 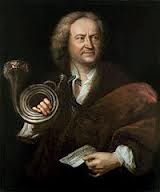 4) The coiled natural trumpet COULD have been played with the hand in the bell, so that out of tune notes could be corrected (but with a much more muted sound). This technique has NEVER been documented by contemporaneous sources.

Since that time, I have bought a couple of other baroque trumpets: a Graham Nicholson instrument that plays with our without holes (4-vent hole system) and a Rainer Egger, “historic” 4-hole system instrument. I have used the Egger for almost all professional baroque trumpet performances, because of its relative accuracy, intonation and reasonably authentic sound. Using vent holes is accurate, primarily because when you play in the upper octave and you open the various holes, essentially half of the partials are not playable, so, to miss a note, your lips have to buzz at a much more distant pitch from the desired note. Incidentally, nowadays, if you are talking about a natural instrument, you say, “natural trumpet” or “natural baroque trumpet,” but if you are talking about a vent-hole instrument, you say, “baroque trumpet,” to avoid confusion.

But I have begun to have a different feeling about playing this “baroque trumpet.” The main reason I was attracted to the natural baroque trumpet was the thrill of playing authentically like real 18th-century trumpeters and the challenge of playing an instrument that was (and is) exponentially more difficult than a vent-hole baroque trumpet compromise. When comparing the piccolo trumpet to the baroque vent-hole trumpet to the natural trumpet, it’s helpful to keep in mind that their “batting average” would be something like .990, .890, and .600, respectively. I am now much more interested in playing the authentic natural trumpet, while I try to correct out of tune notes solely with lip bending. Now, the issue is convincing conductors and audiences that this is the best approach.

Last winter, I played several concerts with soprano Tia Wortham, harpsichordist Jay Wilcox, and cellist Doug Poplin. Here are two clips from one of those performances that may offer a glimmer of hope in the argument for more authenticity. The edits were done because of–you guessed it, missed trumpet notes!

There are a few other really good (complete) videos of natural trumpet playing. Here is a nice one of the French master Jean-Francois Madeuf playing Bach’s “Grosser Herr” from the Christmas Oratorio. Notice the amazing sound quality Madeuf achieves (in part from the authentic natural trumpet and also in part from the rather large mouthpiece he uses–which is thought by many to be an important aspect of the authentic approach:

Compare this to Swedish virtuoso Niklas Eklund playing the same aria. What I hear in this performance is amazing accuracy, technique and intonation. Nevertheless, I also hear a certain modern strident sound quality inherent in the vent-hole instrument Eklund is playing (a 3-hole instrument):

Okay, not to mislead, I guess I will play the “baroque trumpet” if someone pays me, but I really want to sway people to the natural trumpet!