1. Because practice is boring, it must be bad. We like action and danger. But when we do repetitive actions that seem to be going nowhere–like practicing–we often feel “bored.” What is boredom? It really is an emotion which tells us that we’re not satisfying some desire for adventure. We generally do not like boredom. However, did you know that the brain’s neural activity does not decrease during boredom? It actually increases in some functions. Psychologists have found boredom to be an important source of creativity, well-being and our very sense of self. During this state, we notice things we may have overlooked, and we take action on things that we otherwise would have put off. So, for trumpeters, if we can stop panicking when we’re bored and start enjoying the increase in creativity and problem solving. To hopefully take advantage of your opened mind, have a notebook ready to write down brainstorms, or have a voice memo recorder to record your thoughts and melodies. This can lead to some great self-discoveries. 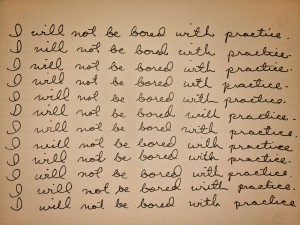 2.  But practice IS boring. The other element to myth number one, above, is that practice is always boring. Yes, we endlessly repeat motor skill activities to get better, and endless repetition seems to bring on boredom. The most important part of de-bunking this myth is that we can practice in ways that aren’t endlessly repetitive. Mini-breaks, lots of varied stratagems, creative problem solving, and engaging the ear all help to shake up you practice routine. Use different locations (church, school, gym, and even the outside can be good, if it’s not bothering anyone).

3. “Practicing” means to play through my piece from top to bottom. If I mess up, I should go back to the beginning, because I want the piece to sound just right from beginning to end. There are actually two myths rolled into one here. The first myth is that we have only one strategy to get better: repeating the whole piece. Actually there a many methods: 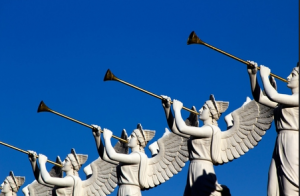 4. Practice makes perfect. The other thing that I find fault with number three above is the idea of “perfectionism.” Perfectionism, while seeming to be a noble goal, is actually not that good for trumpeters. More than most instrumentalists, we miss notes, and we need to get on with life. By becoming fixated on our weaknesses, we never let our spontaneous self naturally blossom.

5. If practicing makes me better, then MORE practice will make me ever better. The error here is that there is a limit to practice, especially the physical aspects of practice. Practice is a lot like a great paint job on a fine automobile. Instead of one sloppy, think coat, it’s far better to paint many thin coats to avoid runs and smears. When we practice too much, we start to get sloppy, and then we get used to being sloppy. I like to think of weekly practice goals, so that each day can be a little different.