(This is the sixth part of my dissertation series. Previous: Monteverdi’s Symbolic Use of the Cornett, Chapter 1, part 4) 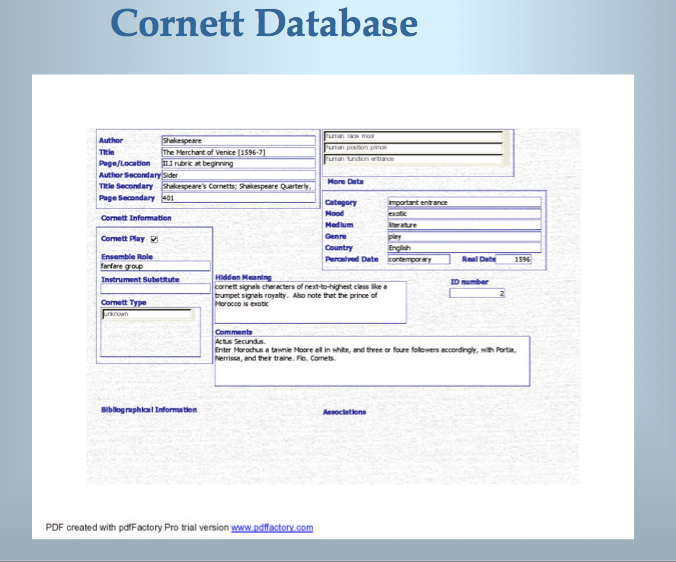 To analyze these general trends, the material for this study was gathered from more than 2,500 sources into a database. Table 1 shows data on the types of sources, their dates, and associated geographic regions. Roughly 2,100 (85%) of sources are musical, but there are more than 200 literary sources and nearly as many artistic sources.[1] Although roughly three-quarters of the sources are from the seventeenth century, they range in date from 1500 B.C. to 1801 A. D. The top three geographic regions in numbers of sources are Germany, Italy, and Eastern Europe, respectively, 38%, 26%, and 21%.

Table 2 shows the geographical distribution separately for the musical, artistic, and literary sources. Since musical sources are by far the greatest number of sources, the same top three geographic regions in sources (Gemany, Italy, and Eastern Europe) understandably have the highest numbers of musical sources, accounting for 43%, 27%, and 25% of the subtotal. However, the picture is different for artistic sources, for which Italy, Germany, and Western Europe provide, respectively, 38%, 29%, and 22% of the subtotal. For literary sources, the picture is even more different, with England providing 84% of the subtotal, followed by Italy (5%), other Western Europe (3.7%) and ancient sources (4.6%).

Table 2 also shows the chronological distribution of the three separate sources. The seventeenth century contributes about three-quarters of the musical and literary sources, but fewer than half of the artistic ones. Roughly one-third of artistic sources come from the sixteenth century, and nearly one-fifth from before 1500. Artistic sources are thus the largest group of earlier sources.

[1]. In musical sources, for statistical purposes, the individual piece and not the entire collection was counted as a single record in my database. Equal weight was given to manuscripts, non-extant pieces known only from contemporaneous inventories, and printed pieces. Only pieces which specified cornett in writing were included. 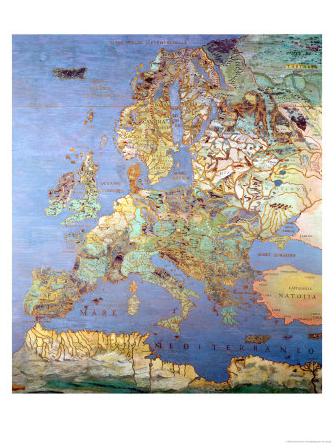 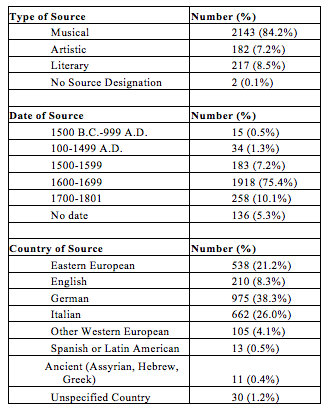 Table 2. Research Sources Shown by Type, Broken Down by Geographic Region and Date 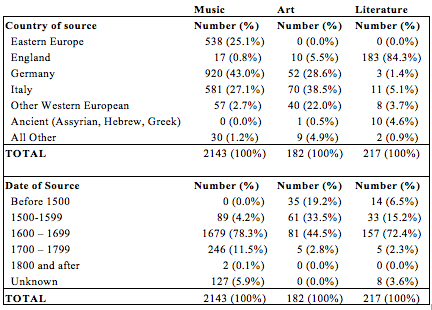 Because most of the sources (93%) come from the three-hundred year period from 1500-1799, with 75% alone from the seventeenth century, it makes some sense to single out that period for separate analysis. Figure 1 shows the remarkable growth in the number of sources from 1600 to 1699 during the period 1500-1799. But this overall picture obscures the fact that literary and artistic sources occur relatively early in these years; by 1680 there remain only musical sources (figure 2). Further limiting our scope to Europe, divided into “South” (Italy and Spain) versus “North” (all remaining) yields a picture similar to that of Collver and Dickey (figure 3), in which the southern sources show a peak in growth that is slightly earlier than the northern peak.

The database includes five other fields of secondary interest. First, each record includes bibliographic material.[3] Second, a field indicating whether or not the cornett was being played is included.[4] Third, each record shows instrumentation as stipulated by the source.[5]  In some musical examples, either the cornett or another instrument could play the same part; therefore, a fourth field exists to show the instrument for which the cornett substitutes.[6] Finally, when possible, each record notes the type of cornett represented.[7]

[5]. There were more than 800 distinctly different instrumentations. Most notable were cornett and trombone ensembles of various combinations: 2 cornetts and 3 trombones, with or without basso continuo, occured 34 times; one cornett and 3 trombones, with or without a basso continuo occured 29 times; 2 cornetts and 4 trombones occured 16 times; and there were 17 instances of unknown types of cornett and trombone ensembles.

[7].  I recorded twenty-five distinct types of cornett in my database. The treble cornett—a term I used to denote a cornett which plays in the soprano range—is represented the most, with 1,971 records. The cornettino occured in 207 records. The mute cornett occured in 118 records, the tenor in thirty-two, the straight cornett in twenty-nine, and the alto cornett in twenty-five. The oliphant, an ancient precursor to the cornett, is represented seventeen times. Eleven records  mentioned a “storto” (not a reference to crumhorn). The bass cornett occurs in nine sources, while the shofar—in the database because of its clear linkage to the cornett—occurs ten times. There are four examples of the fingerhole horn, another ancient precursor. In addition, there are infrequent examples of fantastical cornetts, animal-headed cornetts, and unknown types. 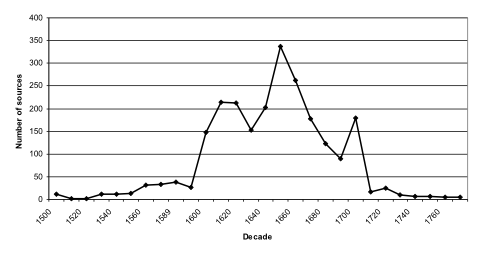 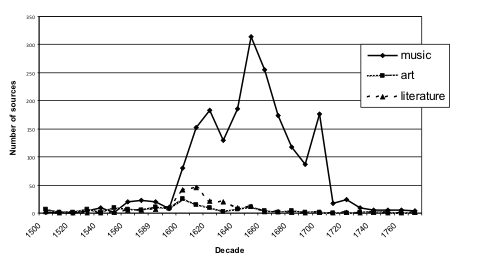 Fig. 2. Number of Sources by Decade and Type 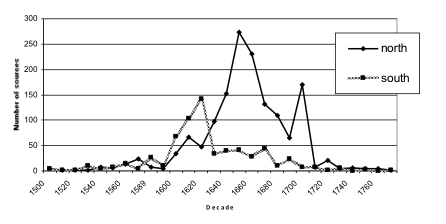 Fig. 3. Northern and Sourthern Sources Contrasted by Number of Sources by Decade 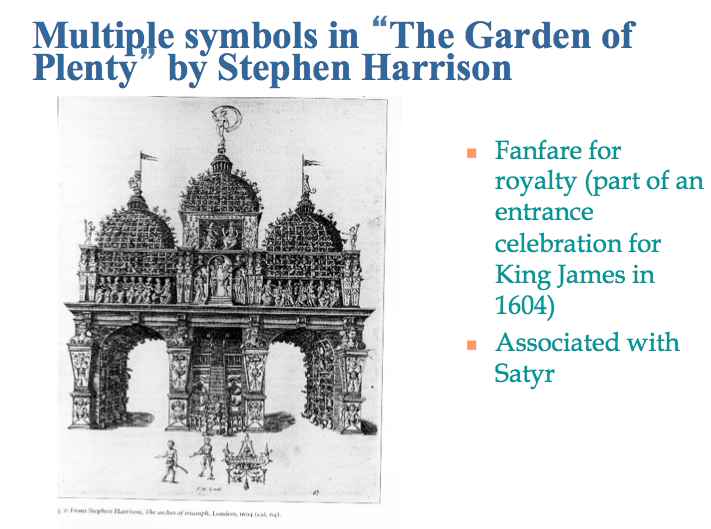 The symbolic association field is the most important part of the cornett symbolism database, albeit the most difficult to categorize and quantify. One sees, many times in the course of this research, source examples that point to multiple symbols. That is the nature of most emblematic research. For instance, in Stephen Harrison’s engraving “The Garden of Plenty” from The Arches of Triumph (London), King James I is greeted by a cornettist in satyr costume.[8] In this example, the cornett has two symbolic associations: it is not only an instrument to announce royalty but also an instrument symbolic of a sylvan mythological creature. My database, therefore, allows for any one record to have multiple symbolic associations, and, since each association can have more than one record, the relationship between records and symbols is a many-to-many relationship. This makes it difficult to make meaningful statistical comparisons between the records and the associations, but it still allows for overall counting of the associations and statistical comparisons between different associations.

Over 4,000 associations were assigned to the 2,500-plus records, making a average of nearly 2 associations per record. There were 372 records with no clear association to be determined. In addition, there are associations that, because of their obvious defining rather than metaphorical natures, are devoid of symbolic meaning and could have been left out of the database.[9] Leaving these out, the top thirty associations are listed in table 3. 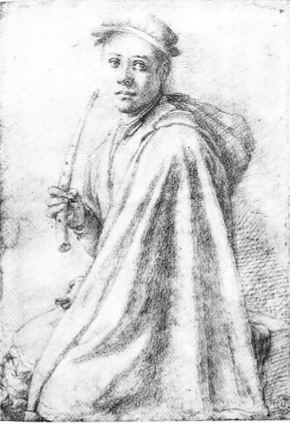 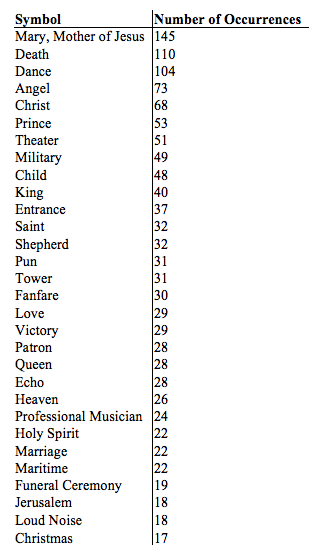 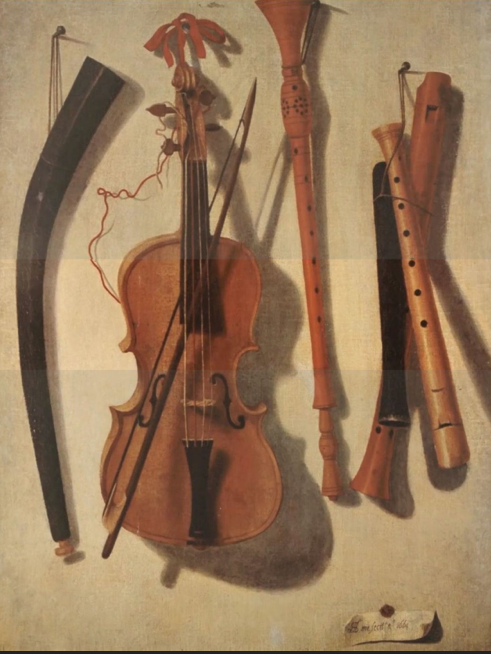 Five thematic categories emerged from this tapestry of cornett symbols: (1) “alta” instrument—the cornett as a symbol for the large, or open-spaced venues where loud music is required; (2) sexuality and the senses; (3) learning; (4) death and rebirth; and, (5) social status. The fourth category, death and rebirth, is the focus of the next chapter in dealing with the cornett in Orfeo. The fifth category, social status, is the focal point of the third chapter, which examines the symbolic role of the cornett in the Vespers of 1610. Table 4 provides some statistical observations about all five thematic categories, the uncategorized associations, and the unspecific records. 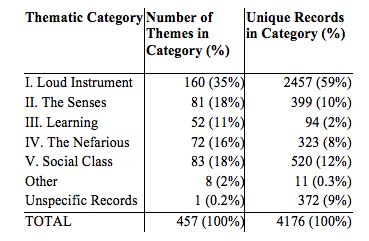 (next: Chapter 2, The Cornett as a Symbol of the Underworld in Orfeo: Cornett and Trombone Ensemble Underscores Scene Changes)