I recently read an op-ed in the Washington Post, “All that jazz isn’t all that great” by Justin Moyer, and it brought to my mind a lot of old conversations and thoughts that I have had about the place of jazz (and classical music) in our culture. Moyer’s piece is a critique against jazz in general. I both agreed and disagreed with Moyer’s views. 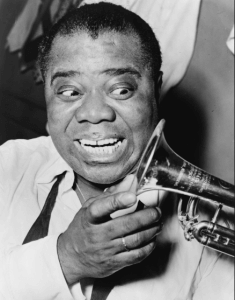 His first point that “Jazz takes great songs — and abandons the lyrics that help make them great,” is partially true. Most jazz today is based on instrumental versions of standards that used to have lyrics. Not wanting to get too bogged down in the fact that there are many great jazz recordings and performances of vocalists, it should be noted that classical music, too, is largely instrumental. Craig Wright, in Listening to Music, writes that “about 80 percent of the Western classical repertoire is instrumental.” Wright attributes the rise in instrumental music to the growing popularity of playing instruments in taverns and homes in the 17th and 18th century. I propose that the rise in jazz popularity in the mid-20th century was also due to the large number of very competent amateurs who could easily play the popular songs of the day and understand the sound of the basic harmonic changes underneath the vocals. Their familiarity with great songs helped create a fantastic backdrop for an appreciation of, and love for, jazz instrumental renditions of popular songs.

The problem today is that there are fewer homes with pianos or other instruments that are played on a regular basis with enough competence to entertain the family. There isn’t enough musical vocabulary understood by the common person of today. I would venture to say that there isn’t even a desire to have live music in homes today. This is, of course, due to the ease in which we can get any recording today for instant gratification. Nobody is compelled to make the effort to learn how to play for the entertainment of friends and family at home.

Moyer’s second point that “improvisation isn’t all it’s cracked up to be” is weak, while taking a needless swipe at Wes Montgomery, the great jazz guitarist. In my opinion, improvisation IS all it’s cracked up to be. Moreover, if there were more improvisation in ALL genres of music, then I think there would be a lot more joyful music making and appreciation. I believe improvisation is none other than the remedy to the decline of today’s music industry. It’s just too easy for everyone to have a favorite tune, to like it only the way it’s recorded, and to only like cover bands that play the tune exactly that way. This mindset has been formulated mainly by the recording industry, which made a huge profit selling people definitive recordings, and by music conservatories and competitions that have promoted correct execution of the musical score over individual freedom. Well, with streaming music today, that profit for the recording industry and the musicians themselves is woefully diminished, and classical orchestras and bands are in great decline. It’s time to start pulling away, at least a little bit, from definitive recordings and scores and to start embracing spontaneous, improvised performances. The difficulty, of course, is that this notion sets the standard higher than most musicians want to go. It depends on developing much better “ears” and knowledge of how the music is constructed. It also tends to by-pass conservatories, at least in the way that they are structured today. 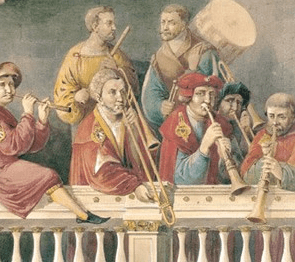 It’s useful, by the way, to point out that classical composers such as Brahms, Mozart, Beethoven, Handel and Bach all were exceptional improvisers. Indeed, an accomplished wind band of the 16th century would have all of their repertoire memorized, and they would decorate their part to such an extent that we would call it improvisation. They called it making “divisions.”

To become a spontaneous, original, improvising musician, you have to listen to others, break down their musical ideas into small portions,  paraphrase these ideas, and then develop the ability to originate your own ideas within the musical language in which you have been working. This is a long process with high demands, but great rewards. 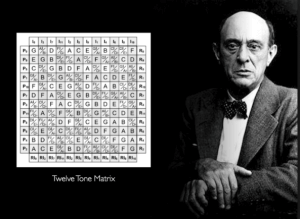 Moyer’s third point is that “Jazz stopped evolving.” This brings up a very important issue that runs contrary to the jazz and classical worlds’ notion that greatness comes in large part from doing something fundamentally new. There is nothing wrong with new ideas in music, but it is just too easy for the human brain to artificially construct an evolution of musical language. And the critics just love to say things like, “Miles Davis introduced the world to cool jazz.” Or, “serialism began primarily with Arnold Schoenberg’s twelve-tone technique.” 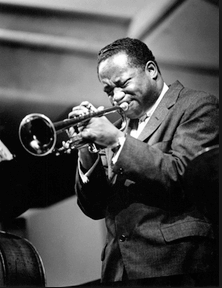 Clifford Brown, one of my favorite jazz trumpeters of all time.

To be able to pin a new trend to someone is just too tempting. Unfortunately, this fascination with music evolution tends to crowd out great artists that were not necessarily innovative in that way (such as hard-bob trumpeter Clifford Brown, British 20th-century classical composer Vaughan Williams, or even J.S. Bach). Innovation is important and needs to be recognized, but beautifully working out one’s personal approach to a musical language should be equally prized. I’m sure there are young composers and jazz artists out there that are afraid to embrace old genres for fear of not being taken seriously as an innovator. 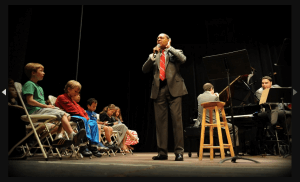 Jazz great Winton Marsalis has let his musical language develop organically. His authenticity has captured the hearts of young and old alike.

And here I think it is important to point out that Wynton Marsalis is a shining example of a jazz musician that has revived a general public interest in jazz by embracing older styles of jazz and creating a fresh approach to this music. Respighi, Hindemith and Stravinsky were all heavily inspired by Renaissance and Baroque examples, and their music continues to inspire listeners with their grasp of older genres. It comes across as authentic and masterful.

Moyer’s fourth point, that “Jazz is mushy,” rambles on about a number of points. He points out that there are non-musical things that are equated to jazz: President Obama once described his own style of speaking as being “like jazz.” And author Jack Kerouac “may be the closest thing we have to a ‘jazz writer.’” Moyer’s statement brings to my mind another interesting point about artificial vs. organic artistic “evolution.”

If you were to go to a library and browse any number of literature genres, you would notice, by and large, a tendency to use the English language in a very recognizable way. Grammar would be mostly correct (and please go easy on my own use of grammar!), and vocabulary would not normally need to go beyond the top 20,000 words (although there are hundreds of thousands of words in the English language). This is true of popular fiction, biography and even scholarly articles. Even most poetry uses recognizable constructions. We do not ask that English literature evolve artificially to some unrecognizable form (even non-sensical poems such as Lewis Carroll’s “Jabberwocky” and stream-of-consciousness novels such as Joyce’s Ulysses are largely understandable). So why, I ask, do we put this terrible onus on jazz and classical music to be new and different? Why do we insist on jazz reaching it’s “logical” conclusion in the “free jazz” of musicians such as Ornette Coleman? Why do we snub modern tonal-like or modal classical music as being dilettante-ish? Let’s everybody relax and enjoy the communication of a living musical language that is SHARED between the artist and the audience. There are countless more pieces that could be masterful and innovative in musical languages that seem “dead,” like, for instance, the baroque language of Bach.

Moyer’s final point, “Jazz let itself be co-opted” brings up the danger of getting too conservative. He writes, “this music has retreated from the nightclub to the academy. It is shielded from commercial failure by the American cultural-institutional complex, which hands out grants and degrees to people like me. Want to have a heated discussion about “Bitches Brew” or the upper partials? White guys wielding brass in Manhattan and New England are ready to do battle.” While it is true that jazz has been fetishized by many white intellectuals and largely ignored by young blacks, it would be nice to gently lay aside these racial aspects that divide us. Can’t we all just get along and enjoy the musical language for what it is? It’s a living language available for all to communicate with. On the other hand, I have to ask myself why is it that you can find a jazz studies program in hundreds of American music schools, but you can hardly find any school that might nurture your interest in Rock, dance music, pop and Hip-hop (perhaps with the exception of Berklee College of Music)? The answer to this question is that we are not willing to be spontaneous and profound with our education. We are not willing to really educate our children and youth in how to communicate with music. From elementary and middle school music programs up to graduate schools in music, we take the easy way out. We encourage a quickly-learned ensemble performance without engaging students in how to improvise or compose or even understand the music that is performed. If a band director can demonstrate to his boss, the principal, that some students learned to play “Hot Cross Buns” at the convocation or the “back to school night” then everything is okay. We insist on students writing English essays, but we don’t care about their ability to compose and communicate in music and the arts in general. 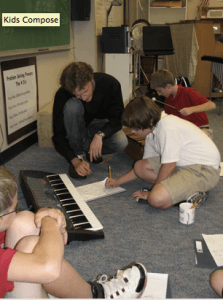 Kids Compose! allows hundreds of schoolchildren between second and sixth grades from Monroe County to use their imagination to compose melodies

How about this idea? Let’s have a group of students compose, under the guidance of a teacher, their own musical, opera or song. (An example of this is the “Kids Compose!” project in Bloomington, Indiana). Let’s have a young musician, who is learning how to play the flute, improvise over some simple chords. Let’s communicate with our artform!