(This is the twenty-forth part of my dissertation series. Previous: MSUC: Chapter 3, Part 6) 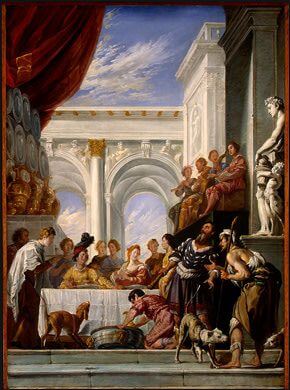 The seventh section, Deposuit potentes de sede, is particularly interesting for many reasons, one of which is that its orchestrational and motivic concepts are derived in large part from the very well-known aria from Orfeo, “Possente spirto.” Both pieces share the texture of two soprano obbligato instruments playing in echo, which decorate and punctuate the solitary vocal line. In addition, there are many motivic devices that link Deposuit to “Possente.” Thus, one can see that Monteverdi used “Possente” as a model for Deposuit. In figure 13, four such devices are illustrated, including the upward-sweeping scale, spanning an octave, which I shall call Motive A; the downward, broken third figure, Motive B; the dotted rhythmic figure, Motive C; and the written out cadential gruppo figure, Motive D. 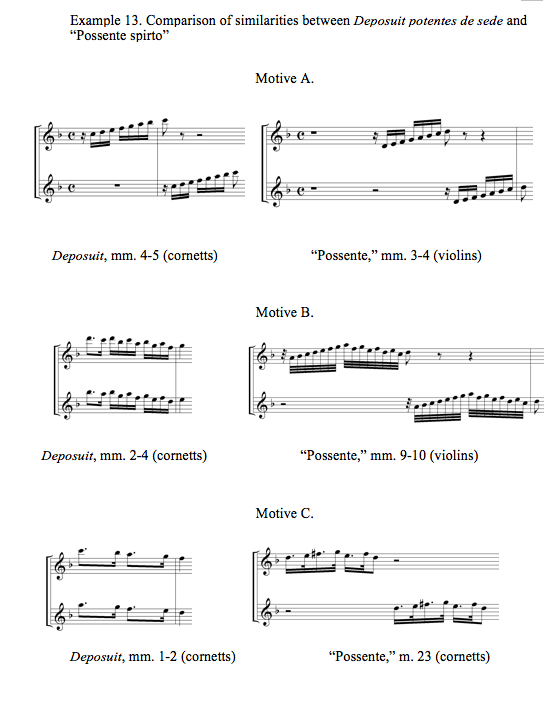 The concluding fifth section is for voice alone (and
un-ornamented). Unlike the order of the first two sections of “Possente,” the two sections of Deposuit potentes de sede are accompanied first by a pair of cornetts, then by a pair of violins. Despite similar motivic usage, as illustrated in example 13, between the first two sections of “Possente” and the whole of Deposuit, there is a significant difference between the two pieces: Monteverdi reverses the order of obbligato instruments. I believe Monteverdi conscientiously reworked the earlier material in order to make a significant correlation between the instrumentation and the new text. The words “Deposuit potentes de sede” (“He hath put down the mighty from their seats”) are framed by ritornello passages played by two cornetts. The words of the second half of this section, “et exaltavit humiles” (“and exalted them of low degree”), are set off by ritornelli played by two violins. The “mighty” in Deposuit are associated with the cornetts, whereas those of “low degree” are underscored by the violin (which was Monteverdi’s own instrument). Having already established the correlation between the cornett and the princely class, this text-painting of social status by means of instrumentation makes sense.[1] Moreover, if the mighty are to be put down from their seats, the cornett as a symbol of vanitas and death becomes an even more pertinent symbol for this passage.[2]

(Next: The Cornett as a Symbol of Social Hierarchy)

[1]. “To Monteverdi, the cornett substitutes for the trumpet and, by transference, becomes a symbol of the political power and munificence of the Gonzaga family.”

[2]. The Cornett as a Symbol of Death and the Transitory in the Graphic Arts