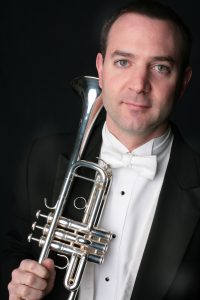 Christopher has recorded extensively with the Los Angeles Philharmonic, Grant Park, Dallas, and Albany symphony orchestras.  Active in the Hollywood recording studios, he can be heard on major motion picture and television soundtracks.  He is a Yamaha Artist, a dedicated educator, and an active clinician.

Having grown up in a musical household, Christopher originally intended to become a band director and earned a Bachelor of Music Education degree from the Crane School of Music (SUNY-Potsdam). Switching to performance, he received his Master of Music Performance degree from the New England Conservatory in Boston. He was a Tanglewood Music Center Fellow in 1995 and 1996.

Christopher’s favorite aspect of his job is the orchestra’s frequent performance of contemporary music, especially the Green Umbrella concert series.

Christopher lives in Altadena, CA with his wife Amanda McIntosh, and two children. He enjoys distance running, skiing, brewing beer, and hiking in the trails behind his house.

SC: Chris, I’m really excited to finally do this interview that we’ve been talking about for a while!

CS: Thanks again for asking me to chat. 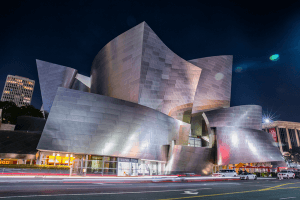 CS: I feel like I have the greatest job in the world, and I get to play in two of the greatest venues—Walt Disney Concert Hall and the Hollywood Bowl. 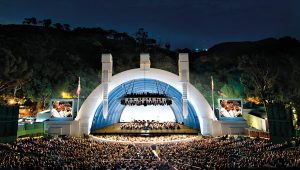 It doesn’t get much better than that.

It’s invigorating to be part of such a dynamic organization, in such a vibrant, creative city. Our management has put the orchestra at the forefront of LA’s cultural life. How many orchestra musicians get to participate in world-class, avant-garde projects on a regular basis? 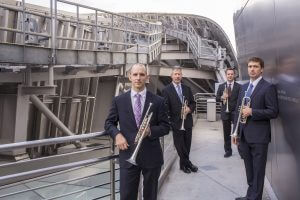 I feel very fortunate.  Each season we perform roughly 350 different pieces, including chamber music, subscription concerts, educational offerings, new music, and so on.  Actually, over the past 5 years we’ve commissioned close to 50 completely new works.   This kind of schedule can be rough, but it helps to have a very strong and supportive section. We all carry our weight and we work well together. My section is a big part of why I love my job.

SC: How do you prepare for this challenging schedule of rehearsals and concerts?

CS: You look at the rep weeks (sometimes months) ahead, prepare at home, and work on an ongoing basis to keep up your overall playing skills. Different orchestras and sections have different standards, but my section expects you to do what needs to be done to show up at the first rehearsal prepared to play well.

If you’re in a crunch, the most important thing is to know the piece, which can help you “manage” no matter what else is happening.  Be familiar with transitions and likely tempos.

Over the years, experience has shown me what types of mistakes I’m likely to make in rehearsal or performance that I might not make at home. It’s my job to recognize these pitfalls ahead of time and sidestep them with strategic practice. The more confidence and preparation you have when you walk on stage, the more you’re able to listen and hear what’s going on, which allows you to be a more responsive musician.

SC: What was your audition like for the Los Angeles Philharmonic?

CS: My audition was pretty typical of a major orchestra.  It was well-run and fair, but it was also grueling—the committee had to find one person from over a hundred participants. I had to play almost every one of the seven trumpets I brought with me, and the lists jumped from low material to high, soft to loud, and fast to slow. 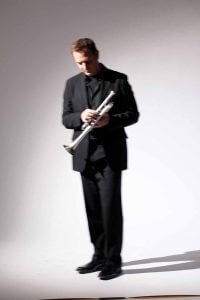 I didn’t play a perfect audition, but I stayed focused on communicating the heart of every excerpt or piece, which requires a certain type of mental stamina and toughness. The committee later told me that I played very musically, with a great sound and character throughout each round.

SC: How would you advise a young trumpeter to prepare for an audition in today’s competitive environment? 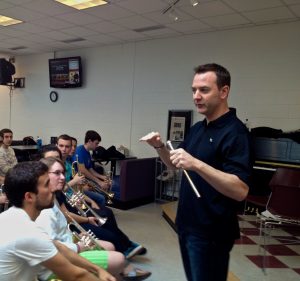 Auditioning is a long-term project for most of us.  Playing well and auditioning well are two different, but related, skill sets.  And you can’t audition well unless you play well.

Most trumpet players I hear don’t have a strong enough technical foundation to win a major orchestra audition. I see a lot of willful ignorance among trumpet players—ignoring the parts of their playing that they’re not good at. Learning how to identify and correct your playing weaknesses is the crux of the learning process, so I’m not saying this is easy.  But a lot of advanced players, who should know better, only work on the things they’re good at, and pretend that everything else isn’t important. I think that what’s happening is that there are a lot of trumpet players who practice, but very few who practice with a real ear for improvement.

“I see a lot of willful ignorance among trumpet players—ignoring the parts of their playing that they’re not good at.”

SC: So, how do you practice to really improve? 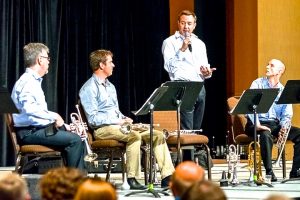 Talking about swallowing the honesty pill at ITG 2016

I like to call practicing this way “swallowing the honesty pill.” It’s really easy to talk about your goals, but when the rubber hits the road, I find most people back down pretty fast. They don’t even realize they’re giving up. The excuses for the lack of success flood their minds, and they never consider taking a hard look in the mirror to see what they could do to improve for next time. It’s more comfortable to keep practicing the same way, and to keep thinking thoughts like, “The audition was rigged.”

SC: Can you talk about your musical influences? 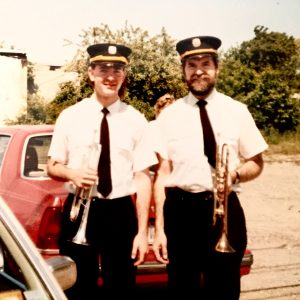 Chris playing in the fire department band with his father, c.1985

CS: My father was an amateur trumpet player and he used to take me along to his fire department band rehearsals and let me sit in the section.

His Phillip Jones Brass Ensemble and Herb Alpert and the Tijuana Brass records were constantly playing in our house. 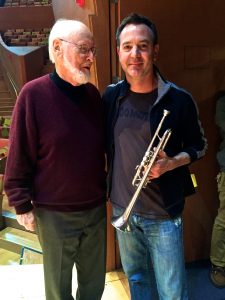 Of course the music of John Williams had a huge impact on me too­­—I think every kid in my band wanted to play the theme to Star Wars. 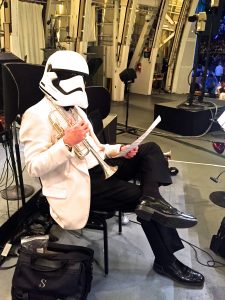 Getting in the Star Wars spirit at the Hollywood Bowl

We took many trips into New York City to see Broadway shows and New York Philharmonic concerts, so all of these sounds were in my head. Also, I had a really strong high school band program, so the musical foundation was pretty much set before I went to college. Incidentally, I originally planned on becoming a band teacher, and did my undergrad in music education and performance at the Crane School of Music. It wasn’t until my junior year that I became inspired to go for a job in an orchestra, which led to a master’s degree at the New England Conservatory.

CS: To keep my head clear, I do a lot of running up in the canyons behind my house; I’m not listening to Brahms 4 on the trails. It’s usually something energizing that gets my adrenaline going—mostly some type of electronic, upbeat music.  I listen to a pretty wide variety of genres, but I have some go-to records—jazz artists like Clifford Brown and Ella Fitzgerald, and some classic rock like Steely Dan’s Aja.  One of my favorites is a Lotte Lenya recording of Kurt Weill’s cabaret music from the twenties—so much character!

SC: What do you do when you’re not playing trumpet?

CS: I hang out with my kids. I go trail running. I help my wife with her new business.  Basically, stuff that keeps me mentally balanced. Playing the trumpet is fun, but the people in your life are what really matter.  I’ve been a pretty serious home brewer for decades, so I’m doing my part to reinforce the “beer drinking brass player” stereotype!

SC: I understand you are launching an online course some time this fall. Tell me about it.

CS: Every time a national audition is announced in the International Musician, I get a panicked flurry of phone calls and emails from trumpet players asking if they can come play their excerpts for me.

I support the concept of playing your excerpts for a helpful set of ears before an audition, but often these requests come only a week before the first round.

In almost every case, I hear basic deficiencies in sound concept or technique that are guaranteed to get the person bounced out of the prelims. Making impactful change in a handful of days is nearly impossible, especially the type of change that can hold up to the stress of an audition. There is not much I can do to help these players in such a short time, and it can be a frustrating situation.

My online course (www.honestypill.com) is designed to help players identify and address the things that are holding them back. Understanding and working on your shortcomings is much harder than most people think, which is why most musicians (and human beings in general) just avoid thinking about them. When my course launches in the fall, I’ll offer a set of diagnostic tools to help each participant hone in on what needs the most work, and then I’ll offer a series of lessons and strategies to “get under the hood.” It’s basically a distillation of the same things I discovered on my own path from being an “also-ran” to winning an awesome job in the LA Phil.

“You have to be willing to delve into the things that aren’t comfortable.”

SC: Well, it’s been awesome to interview you, Chris, and get your insights. Thank you so much for your time!

CS: You’re welcome! It was a pleasure!