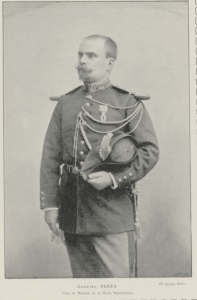 Pares. Pares. Where have we heard that name before? 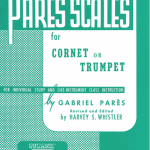 Cover of the ubiquitous scale book (not only for the trumpet, but for many other instruments)

We know him today from the “Pares” scale book (Americans often pronounce his name like the word “Pairs”). In fact, today, I heard a music jury at the conservatory where I teach. There, a young student played scales on his clarinet from his Pares book.

But he was more than a scale book author. He was a French composer, conductor and a cornetist. The son of a military music director, Phillippe Parès, Gabriël studied at the Paris Conservatory both composition under Théodore Dubois and cornet under Léo Delibes. While there, he won first prizes in composition, cornet and harmony. From 1893 to 1911, he was the music director of the famous wind ensemble, the Orchestra of the Republican Guard in Paris. 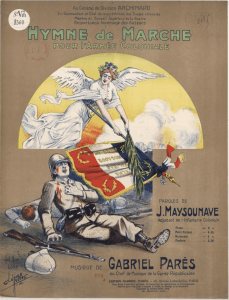 During his career, he composed about 90 original pieces for military band as well as about 50 arrangements. His Instrumentation and orchestration book for military wind bands set the standard of its day. His contributions to the French military band were significant enough that he became known as the French equivalent of John Philip Sousa.

He also wrote a few chamber pieces for cornet. Here’s a lovely video of his Fantasy Caprice for cornet and piano with Wim van Hasselt and Eriko Takezawa.

Interestingly for me, I found a newspaper announcement of a “French Military Band” concert that Parès conducted in Chautauqua, New York, on July 29, 1918. Lalo, Delibes, Saint-Saens, Bizet, Massenet and Gounod were on the program.