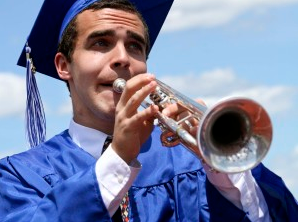 After visiting the five teachers in the Underworld, you’re in heaven, trying to get some good practice, but you’re just not feeling it. Gabriel drops by to play duets, but you just can’t keep up. You say, “I don’t know if I need to play these duets, Gabriel–they probably won’t get me a job up here in the clouds.”

“You know,” Gabriel says, “we should take another trip down to lava land–you know, the Underworld. There are five more trumpeters I want you to meet. Each has an interesting and tragic story. They’re the five students that you’ll meet in hell. I think it’s good to get this out of the way on the last day of 2017”

So, down you fly to that terrible place, where bad trumpeters have to live for the rest of eternity, and we met the five trumpet students of hell.

Gabriel smiles, grabs you by the hand and up you both go, back to the land of clouds and eternal music. Once there, you say, “Hey, Gabe! Do you still want to play duets?” He nods, gets his trumpet out, and you both start playing that duet, keeping at it into 2018. (Happy New Year!)