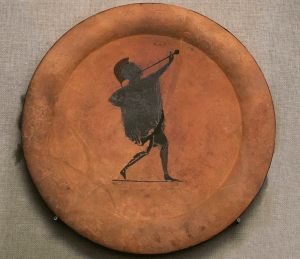 Two trumpeters, Herodoros of Megara and Tortoise, having finished their morning trumpet routine, are in the lounge at the Athenian conservatory of trumpeting, sipping their coffee and tea.

Herodoros: Well, did you have a good warmup today, Tortoise?

Tortoise: (taking a sip of tea) Yes I did, Herodoros! I played through all of my Clarke “Technical Studies” slowly and with the metronome.

Herodoros: I did nothing of the kind. After eating a gigantic breakfast of eggs and a side of mutton, I did all of the important trumpet playing stuff. First I played loud, then I did a bunch of lip slurs to my highest notes. After that I played two trumpets and the same time, because that always gets them at the Olympics.

Tortoise: You know, Herodoros, they don’t have trumpet playing at the Olympics anymore. Trumpeters play with valves and are kind of refined.

Herodoros: I don’t really care for refined. When you say “refined” it reminds me of those overly-sensitive aulos players! (guzzles some coffee)

Tortoise: But Herodoros, the world is changing. If trumpeters want to keep up, we have to change. For instance, I just bought a new baroque trumpet. It plays great. It cannot miss notes, because, unlike those baroque trumpets, which, up to now, only have three or four fingerholes, this new one has seven. You can show up to rehearsal and play as pretty and smooth as the recorder player! The conductor never gives you a mean look. Those looks make me want to tuck my head in my shell.

Herodoros: Tortoise, my little friend, you’ll never be a 10-time Olympic winner like me if you’re afraid of the conductor. You have to blow the salpinx–uh, what you call the trumpet–without fear!

Tortoise: But the audience won’t stand for those out-of-tune notes that you get on that barbaric trumpet of yours. Those rude partials–the 7th, 11th, and the 13th–are just so out of tune!

Herodoros: Out of tune with what, Tortoise? The Olympic gods–probably Triton himself!–made the salpinx, or trumpet, as you like to call it. It is a perfect instrument, making notes that are mathematically pure with each other. Those other instruments that I hear: the lyre, the harpsichord, the most-unnatural piano that I hear being played in those practice rooms! 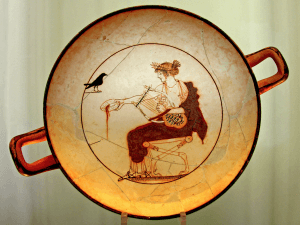 Ancient Greek plate with lyre player. Notice the body of the lyre is a tortoise shell.

Tortoise: Actually, some of my ancestors were lyres! But Herodoros, can I ask you some questions?

Tortoise: How do you get to be a professional musician?

Tortoise: Very good. And who pays you your wage as a musician?

Herodoros: The people that would hear you play. If they like you.

Tortoise: That is completely correct. And what sorts of things do these people like?

Herodoros: Well. What they’re used to, I think.

Tortoise: What are these people used to?

Herodoros: The music that they grew up listening to, I would guess.

Tortoise: I wonder, my dear Herodoros, what these gentle audience members grew up listening to?

Herodoros: The music that was on hand. They probably listened to music from a so-called stereo or radio.

Tortoise: You are right again. And do you think these stereos and radios played music with recordings of Greek salpinx players. Or natural trumpet players?

Herodoros: Well, I should hope so! But I don’t remember every making one of these recordings.

Tortoise: You’re right. There just aren’t many recordings of natural trumpet–or, uh, salpinx–being played. But there are a lot of recordings with guitar, harpsichord, and really a lot with the piano. A great instrument, by the way. It is tuned equally from one note to the next, so that you can play in all the keys! So, if they grew up listening to the equal-tempered piano, they probably love the equal temperament of the piano, right?

Tortoise: “Right!” The answer is “right!” Good. Then, if they love this temperament, will they give their good money to listen to the un-equal temperament of the natural trumpet?

Tortoise: Then, can you become a professional musician if you play the natural trumpet?

Tortoise: “Not likely”! It’s impossible, my friend! So, do you agree that, if you want to be a professional trumpet player, you cannot play the natural trumpet? You have to put fingerholes into the instrument!

Herodoros: But, Tortoise. Why don’t you just play the trumpet parts on the piano? Or, even better, on one of those machines I saw–I think they call them the synthesizer or sequencer or something like that.

Tortoise: Well, Mr. H., I think they want to see a trumpet in someone’s hand in a performance. Otherwise, what’s the purpose?

Herodoros: Great, T. Then, what does “period” stand for?

Tortoise: Well, uh, the instruments that were used in the “period” in which the music was written.

Herodoros: Why do the people like “period instrument” performances, I wonder?

Tortoise: Well, because it gives them a good idea of the way the music sounded when it was written.

Herodoros: And what was the trumpet like in the day of, say, Bach or Handel?

Tortoise: Well, I wasn’t there, but I believe they were long trumpets, usually with decorated parts on them. Sometimes a banner hung from them, even!

Herodoros: What about these fingerholes? Did they have these?

Tortoise: Well, no. They were invented later.

Herodoros: You mean a few years after the composers made these pieces?

Tortoise: Uh, no. I mean hundreds of years later. When we had a revival of interest in this music in the 20th Century.

Herodoros: So, if the point of playing period instrument music is to play on the instruments of the time, and if the trumpet of the time did not have fingerholes, why would we do this?

Tortoise: Well, because everyone else does! And it is much safer. Safe is good!

Herodoros: So, “period instrument” performance means to play the music like it was originally played, unless everyone else is doing something else nowadays?

Tortoise: Herodoros! You’re impossible! Go, and play your vulgar notes on the natural trumpet and leave me alone.

Herodoros: Fine! I will, after a little lunch. See you tomorrow, Tortoise! Enjoy your new 10-holed fancy trumpet! By the way, you don’t have any money for food do you, T.?

Tortoise: I do have a few dollars, H. They’re left over from my last gig. You can take some–be my guest! Oh, and my trumpet only has seven holes!

Herodoros: Are you sure? I mean, about me borrowing the money? Thanks, Tortoise!