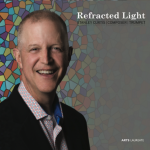 For more than 10 years now, I have been composing pieces based on stained-glass windows at my church, St. George’s Episcopal Church in Arlington, Virginia. Two summers ago, my efforts culminated with a recording project in the nave of St. George’s, where I collaborated with some of my close musical colleagues to record five of these compositions, each of which relate to the themes and artwork of the windows: the stories of creation, Daniel, Epiphany, the Crucifixion, and Judgement Day. Because of the way the sunlight colorfully streams through St. George’s windows, I call this group of compositions “Refracted Light.” This recording has just been released on the Arts Laureate label and is available on all major platforms like Amazon, Spotify, iTunes and CDBaby.

Note: The audio track has a link for the Spotify platform.

The Creation Window at St. George’s.

The short piece for soprano, trumpet and piano, called “Without Form” is the musical setting for the Creation Window, and is my earliest of these window compositions.

Text for “Without Form”

Without form God created the earth and the sky.
He moved upon the face of the waters.
And God said, “Let there be light: and there was light.”
And it was good.
He made the firmament divide:
Waters from waters, and he called it heaven.
And let the dry land appear:
And he called it Earth.
And let the earth bring forth grass,
The herb yielding seed,
The fruit tree yielding fruit after its kind.
Let there be lights in heaven for signs and seasons.
Let the waters bring forth, abundantly, great whales, giraffes and fowl.
He did make man in his image; male and female made he them.
The heavens and the earth were finished
And all of the host, in the seventh day.
He rested from work and blessed that day;
Because his work it was created and made.
It was good; it is good; it will be good.

But the music started with a different text from a poem by T.S. Eliot called Little Gidding. After reaching out to the T.S. Eliot estate for permission, I was told that they do not want his poems set to music, so I was left with a song that needed new words. I turned to the creation story from Genesis, loosely paraphrasing with an eye to making a piece that musically depicted the Creation Window at St. George’s. Some of the music had to be changed, but I think the overall result was effective. Soprano, Tia Wortham, sang both versions of this piece and has continually helped me to better understand the craft of setting words to music. Indeed, many refinements of the text setting come directly from her. The pianist for this recording is Ben Keseley, music director for St. George’s.

Here is a live video from the Levine Music School in Washington, DC, of the earlier version on this piece “What We Call the Beginning.”