Part five in a series on my new album, “Refracted Light.”

Introduction: I composed five chamber works based on stained-glass windows at my church, St. George’s Episcopal Church in Arlington, Virginia. In 2017, I recorded the project in the nave of St. George’s, where I collaborated with some of my close musical colleagues to record these compositions: the stories of creation, Daniel, Epiphany, the Crucifixion, and Judgement Day. I call this group of compositions “Refracted Light.” This recording has just been released on the Arts Laureate label and is available on all major platforms like Amazon, Spotify, iTunes and CDBaby.

Note: The audio track for this blog has a link for the Spotify platform.

The piece is musically derived from four elements: the opening cadential formula (similar to a “plagal cadence”), the choral tune “Drum so lasst” in movement six of J. S. Bach’s Cantata 115 (which deals with the theme of the Judgement Day), the limitations of the natural harmonic series of the baroque trumpet, and textual imagery. Listen to “Judgement Day” here.

I adapted text from the Book of Revelation and The Gospel According to Matthew to underscore the apocryphal symbolic use of the trumpet.

The first angel sounded, and I saw hail and fire mingled with blood.

The second sounded, and I saw a great mountain burning with fire and was cast into the sea.

The third angel sounded, and I saw a great star fall from heaven, burning as it were a lamp. 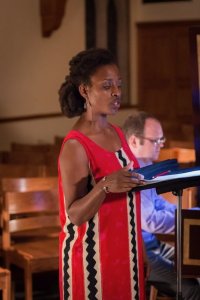 The fourth angel sounded, and I saw the sun and moon and stars were smitten.

The fifth angel sounded, and I saw a star fall from heaven, opening the bottomless pit, from the smoke of which came locusts and scorpions.

The sixth angel sounded, and he loosed the four angels bound in the great river Euphrates.

And the four angels were loosed, which were prepared

For an hour, and a day, and a month, a year to third part of all mankind.

The number of the army of the horsemen were two hundred thousand strong. 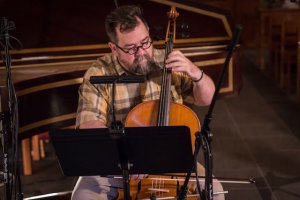 And the seventh sounded, and I heard a great voice in heaven, saying, “The kingdoms of this world are become the kingdoms of our Lord.”

And he shall set the sheep on his right hand, the goats on his left.

The King shall say to the sheep, “Come, inherit the kingdom prepared for you from the foundation of the world.

I am Alpha and Omega, the beginning and the end.” 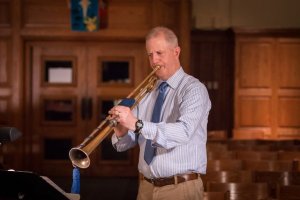 The King shall say to the sheep, “Come, inherit the kingdom prepared for you from the foundation of the world.”