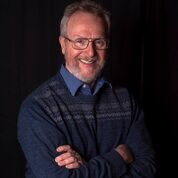 Michael Bucalo is a native of Ann Arbor Michigan. His primary teachers were Clifford Lillya and Frank Kaderabek.

He attended the Cincinnati College-Conservatory of Music from 1973-1977 and studied Eugene Blee.
He was second trumpet with the New Orleans Symphony Orchestra/Louisiana Philharmonic Orchestra from 1977-2005, and then played with the Austin Symphony Orchestra and Austin Opera Orchestra from 2006-2015. He served as an adjunct faculty member at Loyola University of New Orleans from 1978-2002.
Mike has also performed with the North Carolina Symphony, the Atlanta Symphony and the San Antonio Symphony Orchestras.
He additionally studied orchestral trumpet with Donald Green and James Thompson.
Currently, he is a free lance and substitute performer in Northern Colorado living with my wife Dawnette and 2 golden retrievers, Crash and Magic.
Recently, the CSU Trumpet Studio has had the opportunity to host many guest clinicians through “Zoom” meetings during the pandemic. One of them was Mike Bucalo. Mike chose to talk about preparing for an orchestral career. He later summarized his ideas in a follow-up email to me. I thought they were great, and I asked him if I could publish them on the Trumpet Journey website. So, with his permission, here is Mike’s summary!
Quoted from Mike Bucalo:
From playing more than 2 dozen professional orchestra auditions and sitting on a dozen or more brass audition committees in New Orleans and Austin, here’s what I’ve learned about auditions and tryouts of any kind.
The players that stand out at auditions always do the following things:
1) They play virtually every note in the “center” of the pitch. They are never out of tune with themselves.
2) They play every note in the “sweet spot” or center of their sound. Big, small, dark, bright, doesn’t matter. No distortion or spread. They are consistent.
3) All attacks are pure and clear. (find a mouthpiece that’ll make that happen)
4) They are in control of time. They start with and maintain correct tempi.
5) Their phrasing is intelligent and appropriate. No absolute one way to do things.

The epitome of these concepts (1-5) is Christopher Martin’s playing. It’s why he always wins. Everyone should listen to him, often.

6) You don’t have to be the BEST player to win. But you do have to make simple things sound GREAT. To me, that’s as much about self awareness as skill. Record, record, record! There’s always a difference between how you really sound and how you THINK you sound.
There are 3 practice books that made a huge difference with tonal and pitch focus, attacks and time control for me. No magic transformation, but they are great awareness builders:
1) The Buzzing Book by Jim Thompson (its essential to download and practice with synthesizer accompaniment)
2) FUNDAMENTALS FOR BRASS by William Bing published by Balquhidder Music (The Long Tone exercises are fantastic for strength building and tonal control)
3) Foundations for Superior Performance by Richard Williams and Jeff King ( The scale, Clarke and arpeggio exercise are perfect for mastering time control, attacks and playing with consistency.)
I hope my accumulated experience will be helpful to some. Thanks for letting me share.
No tags for this post.