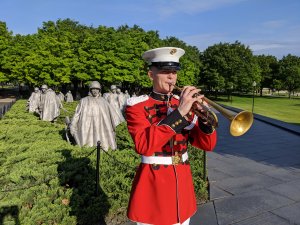 Staff Sgt. Robert Bonner began his musical instruction on trumpet at age 11. After graduating in 2006 from Eustace High School in Eustace, Texas, he earned his bachelor of music degree in music education from Texas Tech University (TTU) in Lubbock in 2010. He earned a master’s degree in music performance in 2014 from Colorado State University in Fort Collins. His notable teachers are Justin Bartels of the Colorado Symphony Orchestra, Ray Mase of the Aspen Music Festival, Jeffrey Meyer, and Max Matzen. Prior to joining “The President’s Own” in 2015, Staff Sgt. Bonner performed with the Colorado and Fort Collins Symphony Orchestras, the Minnesota Orchestra in Minneapolis, the Aspen Music Festival Orchestra and Chamber Orchestra, the National Symphony Orchestra in Washington, D.C., and the National Orchestral Institute Orchestra in College Park, Md.

SC: I would love to hear about how you became interested in music when you were young—and who some of your early teachers were. Did you grow up in Texas?
RB: My mom and dad probably had the earliest influence on me, as far as sparking an interest in music. They always played music around the house when I was young. My dad loves all kinds of music, as well as my mom. My step-dad is a singer/songwriter, and I grew up watching his live performances.
This may be hard to believe, but I didn’t start taking trumpet lessons until I attended Texas Tech, where I took from Will Strieder. During my first year of undergrad, I also began taking from Jeff Meyer who had a HUGE influence on me and my development.
I grew up in a small east Texas town called Payne Springs. East Texas is a really beautiful place!

SC: You went to Texas Tech University in Lubbock for your undergrad. What was that like?
RB: Tech was great! I made a lot of long-lasting friendships there. My freshman class was packed with a ton of really great trumpet players. Our studio had a healthy culture of encouragement and friendly competition. I learned so much from my fellow trumpet students. They constantly pushed me to become a better trumpet player and musician.
I got my bachelor”s degree in Music Education, and that was a really great experience as well. I think that it gave me the tools to not only be confident in front of students, but also to be a better teacher for myself. 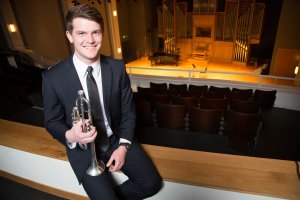 SC: And then you came to Colorado State for your master’s degree. I was thrilled to find out that CSU had a trumpet graduate in the “President’s Own!” Why did you choose to go to CSU? Tell me about your experience being a Ram!
RB: Yep! I chose CSU because I feel that they offer everything that a student needs to succeed. Great facilities. Great ensembles. And great faculty, like yourself! I had access to practice facilities, at any time of day, which is so important – in my opinion the most important!
My orchestra experience – shout out to Maestro Kenney – was amazing for me. We played a lot of challenging repertoire. And Professor Kenney pushed all of us to be the best musicians we could be.

SC: I read that you went to the Aspen Festival, too, which is so great.
RB: AMF was a great experience. Ray Mase, my teacher at Aspen, is an incredible teacher and mentor.
The ensemble experience there is second to none. For two months, you sit and play next to some of the most accomplished orchestral musicians. I would highly recommend that festival to any student thinking of going to a summer festival.

SC: I have been playing with the Fort Collins Symphony since I arrived in Fort Collins a few years ago. But I read that you also played in the FCS! Can you remember any of the programs you played?
RB: Yeah! I was able to play with the FCS. I was fortunate enough to play principal for the Nutcracker. It was a great experience for me; and I am so thankful for the opportunity.

SC: Yes–I was able to do a CSU Trumpet Day in 2018 with the amazing Justin Bartels–and I have also been fortunate enough to play with the CSO alongside him.
Eventually, you won a job in the U.S. Marine Band, one of the most competitive auditions there are. I would love to hear about how you prepared and what the audition was like for you.
RB: The actual audition process is like that of a symphony orchestra. There are multiple rounds of excerpts (prelims, semis and finals) – and even sight reading. Auditions can be really tough, and often scary experiences; but I felt really taken care of at my audition for the band!
As far as my preparation, I was practicing a ton. During my prep for the audition I was also a student at Aspen. So, I was able to have great coaching during that prep time. I would wake up really early and get a practice session done before my first rehearsal. I like to break up my practice into small chunks spread throughout the day.
I wanted to be the best trumpet player I could be for the audition, along with having my audition music really prepared. Or better, over prepared!
I was also playing a ton of mock auditions for my teachers and colleagues at Aspen. I cannot stress enough the importance of doing these mock auditions in preparation for an audition! 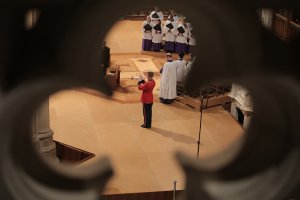 SC: What have been some of the highlights for you in the Marine Band?
RB: Any opportunity to play at the White House is very special; and I have been fortunate enough to have played there a bunch! Playing Taps at Arlington Cemetery and the National Cathedral. Our national concert tour is also really fun! Getting to see the country and play for amazing people is a real privilege.

SC: Do you ever perform outside of the the Marine Band in Washington?
RB: Yeah! I have been lucky enough to play with the National Symphony Orchestra and Barclay Brass regularly. Some friends and I have a brass quartet called Dominion Brass Quartet that we play in regularly. Chamber music is something that I love very much; so I jump at any opportunity to do it.

SC: So, what was it like playing for the Inauguration this week?
RB: For me, it’s truly an honor to be a part of something so significant to our country and our democracy. I never thought I would ever live in DC, let alone perform as a member of “The President’s Own” United States Marine Band at the inauguration.

SC: What is your advice to trumpet players out there who want to win a job like yours in the Marine Band?
RB: Practice. Be open to new ideas. Be open to criticism. Be humble. Be prepared. Be PATIENT. Set goals, big and small. Put yourself out there—play for as many people as you can. And again, practice!

SC: What do you do when you’re not playing trumpet?
RB: I like to run, backpack, hike, cook, and try out interesting coffee shops and restaurants. 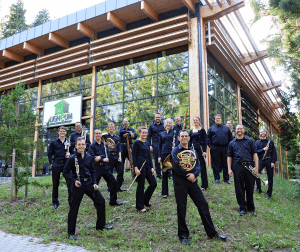 SC: Robert, thanks so much for doing this interview with me. Any final shout outs to CSU professors or fellow students when you were a Ram?
RB: Thank you!
I would like to give a shout out to Maestro Wes Kenney, for such an incredible orchestra experience.
To Dr. Joel Bacon, Dr. Dawn Grapes, Dr. Paul Metz, Michelle Stanley and Wes Ferreira, thank you all for being incredible teachers and mentors during my time at CSU!

And thank you, Dr. Curtis!