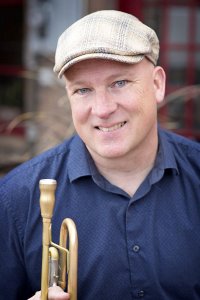 Corry directs the Poudre High School Wind Ensemble and co-directs the Concert Band. The Wind Ensemble has performed at Carnegie Hall twice, and was invited a third time in March 2020. They have qualified for the CBA State Concert Festival numerous times. His Jazz Band 1 and Jazz Combo 1 have recently performed at the CMEA Conference. They have also performed nationally at festivals in New York and New Orleans. Corry is an active local musician, frequently performing with the Fort Collins Symphony, where he served 20 seasons as 2nd trumpet as well as the Cheyenne Symphony, Greeley Philharmonic, Larimer Chorale and numerous other ensembles. He can most often be found playing jazz around town at Avo’s, Jay’s Bistro, Ace Gillett’s and the Sunset Lounge.  For good measure he also plays in Salsa Forte Latin Band.  He lives in Johnstown with his wife, three daughters and an overzealous Golden Doodle.

Interview with Corry Petersen. The interviewer is Stanley Curtis

SC: So happy that I am getting to do an interview with you, Corry!
CP: Thanks so much for having me!  I’m really honored you’d ask!

SC: Tell me about how you became interested in music when you were young. Who were your influences—teachers and musicians you enjoyed listening to.
CP: I guess my earliest influences came when I was quite young.  I remember listening to my dad’s Louis Armstrong records (particularly ‘Hello, Dolly’ and ‘Satch Plays Fats’) as well as some of his Al Hirt and Louis Prima recordings (Jungle Book, especially…. like I said, I was pretty little!).  I also remember being amazed at Doc Severinsen’s range on the Tonight Show Band and I became a bit obsessed with developing a good upper register back in junior high.  My band director at Thompson Valley High School in Loveland was also a VERY good trumpeter (Rick Henry).

SC: Eventually you wound up going to Colorado State, and then University of Northern Colorado. What made you choose these schools? Did you study with Bill Pfund?
CP: I would always attend the Rocky Mountain Summer Music Camp at CSU during my junior high and high school years. That’s where I met David Shaner (CSU’s trumpet professor at the time). I really enjoyed working with him. I started taking lessons with him my 11thgrade year, and then decided to continue studying with him for my undergrad. After that, I went to University of Northern Colorado for my masters’… I’d known and been playing locally with several of the trumpeters in the UNC studio, and Mr. Pfund encouraged me to come to UNC for my masters, so I did! I really enjoyed my time there as well, Mr. Pfund was a wonderful teacher and is a pretty incredible human being on top of it!

SC: You must have been in the jazz program at UNC, too. What was that like?
CP: The jazz studies program at UNC was a great experience! I was well prepared at CSU, where I got to study with Hugh Ragin, who is kind of a huge deal in jazz trumpet world (he currently plays in the Art Ensemble of Chicago, as well as many other projects…) The jazz program at UNC was MUCH bigger than CSU’s at the time, and that took a minute to get used to, but I had the opportunity to play with some cats that have gone on to pretty big things, as well as working with some incredible guest artists (Arturo Sandoval was one of my favorites!)

SC: Wow! So, you eventually became the director of bands at Poudre High School here in Fort Collins. What is it like, applying for a music education job like that?
CP: The Poudre job came open as I was finishing at UNC (I had to ‘piece’ together my last semester over some summers, but it all worked out).I had student-taught at Rocky Mountain High School with Casey Cropp, and he insisted that I apply (I didn’t think I had much of a chance, having no experience).Turns out I had a great interview, largely because I wasn’t very nervous, because there was no way in my mind that they’d be hiring me. Anyway, they surprised the heck out of me and offered me the job a couple days later. I do know that Casey, Bill Pfund and Dr. Shaner all pushed hard for them to take a chance on me, and they did… and now I’ve been there 25 years!

SC: That’s quite a career already! What kind of students do you get to work with there?
CP: One of the really great things about Poudre is that we are, by far, the most diverse high school in Fort Collins. We have kids from all walks of life, all backgrounds, with a wide ethnic and socio-economic diversity as well. While that might sound like it could pose some challenges, it has always been a great source of pride in our building. I attribute a lot of that culture to the Principal that hired me, Sandra Lundt. She was the principal here for my first 15 years (and is an alumnus as well). I feel our Poudre musical ensembles in particular can teach a great lesson on what it is to come together to produce something positive, useful and beautiful… something we could use a lot more of in the world, as far as I’m concerned.

SC: What are some of your proud moments as band director at Poudre? 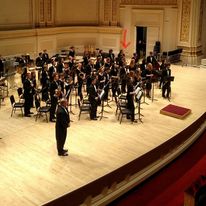 CP: I’m constantly proud of my kids, but a few highlights would be twice performing at Carnegie Hall with our Wind Ensemble (we were actually invited for a third appearance last March, but Carnegie shut down for COVID 10 days before our trip… bummer!) Our top jazz band performed at the CMEA convention in 2019 and we made it a tribute to our mentors… we had some local jazz players sit in on our last tune, as well as a great New Orleans trumpeter named Ashlin Parker, it was a great time! Our Jazz Combo then performed at CMEA just last year, in 2020 and we featured some great original tunes by the students… something that doesn’t happen a lot at CMEA, so that was a pretty proud moment too!

(note: here is a link for the Poudre High School Jazz Combo in New Orleans in March 2018; Corry solos and then Ashlin Parker solos: https://youtu.be/IklYdIurusk)

SC: I saw that concert–it was great! But trumpet playing. You still play trumpet—and really well! How do you keep up your chops while doing your very demanding teaching job? 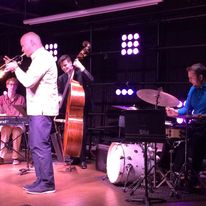 CP: I make sure to get on my horn pretty much every day, even if it’s just to do my Stamp warm-ups, or something like that. I do practice on my off periods a good bit as well.It’s good for me, and I think it’s also good for my kids to hear that I’m working at it too. I was able to take some lessons with Keith Johnson at the University of North Texas right before I started my master’s at UNC, and he advocated that practicing at the school helps the kids see that you’re also serious about it, and that you’re willing to do the things you’re asking them to do. I think he was spot on with that! I’ve also been lucky to be a ‘regular’ in several groups over my teaching career, which ‘makes’ you keep up with it. But even over the past 10 months during the pandemic, I’ve been practicing a lot… I love the trumpet, and there’s always something to work on!

SC: Do you think playing at the level you do helps you teach better?
CP: Absolutely! I really believe that keeping up with my artistic endeavors gives me a unique and valuable perspective when I’m trying to get my students to think about their artistic goals. There’s so much truth to ‘if you don’t use it, you lose it!’ and I think I’d really suffer pedagogically if I weren’t consistently trying to better myself on the horn. I also think that my teaching also really helps inform my playing… There’s a lot of fundamentals I work on with my students and it definitely helps remind me as a player what I need to be doing!

SC: I recently found out that you used to play second trumpet in the Fort Collins Symphony (where I now play). When was that and what were some of the pieces you played? 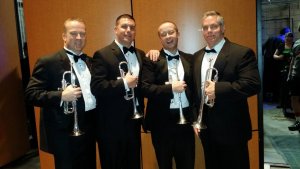 CP: I did! I won that job right after my undergrad at CSU (around 1995-96, I think).  I actually replaced Rick Henry, my HS band director after he retired. I played for Maestro Schwartz’s last few years, and for Maestro Kenney’s first decade or so (as well as one ‘interim’ director for a couple years). Overall, I spent 20 years as 2ndtrumpet in the Fort Collins Symphony. Ultimately, I found myself really missing playing jazz… which has always kind of been my first musical ‘love’, so I resigned around 2016 to work myself back into that scene. I still get called from time to time to do some orchestral work in Cheyenne and Fort Collins, which is really great.I had the opportunity to play so much great repertoire in Fort Collins (I even served a couple terms on the Artistic Advisory Committee and got to help choose some of the rep)… I’d say the highlights were, for me, ‘Rite of Spring’, Mahler Symphonies 1 & 5, Bernstein’s ‘Symphonic Dances from West Side Story’, Prokofiev 5, Pictures (a handful of times) and Copland 2. These were some of my favorite pieces. But there really was so much great literature we did–I’m so thankful that I got to play it!

SC: And you play jazz—tell me about some of your jazz gigs! 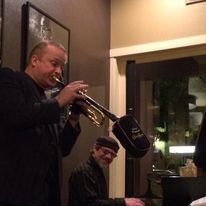 CP: I do, like I mentioned it’s always been my real musical passion.Prior to the pandemic, I played frequently at the Elizabeth Hotel with Mark Sloniker, and also at the Crown Pub, Jay’s Bistro and Ace Gillett’s. There’s a few regional big bands that will call me to sub from time to time as well, I’ve always really enjoyed big band playing too! The jazz scene doesn’t have so many ‘set’ groups in terms of personnel, but instead musicians calling other musicians for their gigs and projects, which is a bit different than the orchestral scene, but I really love getting to play with lots of different people and to hear what they’re doing!
I also play in a local salsa band… we used to be called ‘Manabi’ but recently re-branded to ‘Salsa Forte’… there’s a bunch of great local musicians in the group and talk about keeping your chops in shape!Playing lead in a salsa band is about the most demanding gig I’ve ever done, but it’s a great time! We do a good bit of Afro-Cuban Jazz as well, and there’s lots of room to solo on many of the tunes.I’m really looking forward to getting that going again!

(note: here is a link to a fantastic recording of Corry playing with the Riley Williams Trio playing “Bye Ya” https://youtu.be/r3CZhs2aKgU)

SC: Corry—I’m not sure you could ever have any free time, but if you do, what do you enjoy doing when not teaching or playing?
CP:I have a wonderful wife, Emily, who is a local health care administrator, and we have three beautiful daughters (Ella – 13, Nora – 10 and Lily – 10) and we love to spend lots of time together. Snowboarding, snowshoeing, kayaking and hiking are some of our favorite activities. I am a huge CSU fan, go Rammies! I also love my Broncos (even through these awful last few years). I also love the Colorado Avalanche (I used to play a lot of hockey too), at least they’re looking to be great this year! We also have an amazing golden doodle named Charlie, who provides all kinds of entertainment!