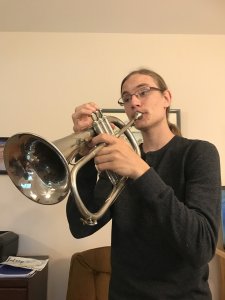 Born in Maryland and currently living in Texas, Johnny Dollard has been playing trumpet for 9 years. He writes, arranges, and creates videos for music, especially trumpet and brass ensembles, and is currently in his first year at Stanford University majoring in Materials Science.

(editor’s note: my wife and I worked together with Johnny’s parents in the U.S. Navy Band for nearly 20 years, and we remain close friends.)

Interview with Johnny Dollard. The interviewer is Stanley Curtis

SC: Hi Johnny! Thanks for agreeing to do an interview on my blog!
JD: Hello! Thanks for reaching out for the interview, I’m happy to be here.
SC: You’re still really young, but let’s start even younger—what were some of your earliest musical experiences? Who were you teachers and influencers when you were young?
JD: Well, I guess my earliest musical experiences must have come before I can even remember, since my parents were both in the Navy Band with you when I was a kid. I got to hear them practice quite a lot, and also listened to their concerts from time to time growing up. Way back in first grade, and again in third, Dad tried to start teaching me the cornet (on the same instrument he’d learned on 40 years earlier, which is pretty cool), but both times I was too small to actually hold up the instrument for longer than a few minutes, so I wasn’t able to really get going until about the middle of fourth grade. Until then, I had some fun in recorder class in elementary school.
SC: I’ve known you and your parents for a long time, because your dad and mom were in the U.S. Navy Band—along with me and my wife. What was it like to have military band musicians for parents? Have your mom and dad influenced you in non-musical ways?
JD: It was pretty cool! Getting to hear them in concert was great – I especially loved it when the band played Stars and Stripes Forever, since I got to watch Mom stand up and play that famous piccolo section. The yearly tour that one or the other would go on was a bit odd, since they’d be out of the area for a couple of weeks, but they always brought back some fun stories.
Other than musically, my parents have certainly had a huge influence on me. Throughout my schooling, they’ve been very active in my education, not only teaching me the extra math and reading skills that have helped me so much, but encouraging me to be curious and creative. They’ve been super supportive of my interests, and it’s wonderful knowing that whatever I decide to do, they will be happy seeing me excited about it.
SC: When you moved to Texas, what was the band environment like there—at least in your school and district? 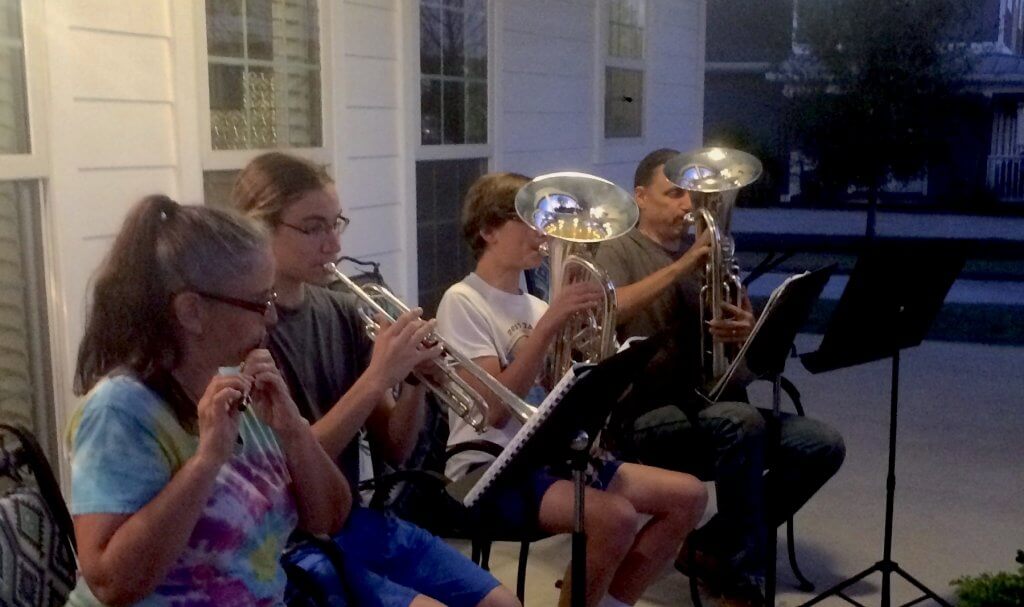 The Dollard family on their Texas porch–serenading the neighbors

JD: It was fantastic. I’d had a good introduction to solo playing, but the band program where I moved from was pretty weak. Once I got to Texas, I fell in love with playing in a big group every day, and the strength of the band program really helped my playing. Learning an instrument is great, but it’s even better if that learning happens alongside a bunch of other people your age in a fun (and at times, a bit competitive) setting.

SC: Did you participate in any competitions or All State bands?
JD: I did! I was fortunate enough to have the honor of performing in a TMEA All-State ensemble all four years of high school – the last year somewhat narrowly missing COVID’s arrival in Texas. It was an incredible experience. The music was amazing, the conductors were awesome, and more than anything else, playing alongside that many talented musicians for a few days was life-changing.
The other competitive thing I did, musically, was marching band, which, for those who don’t live here, is huge in Texas thanks largely to football’s popularity. It honestly wasn’t my cup of tea at first, but I managed to get into it after not too long and had a lot of fun.
SC: Johnny, I should add here to my readers that it’s incredibly difficult to make the Texas All State roster for four years–so, kudos to you!! I know that you played Strauss’ Alpine Symphony one year! And I know that you were also often featured as a soloist with your high school marching band. When you were in high school, what other things were you into besides music?
JD: My other big thing was Robotics. I was lucky enough to join my high school’s “FIRST” (For Inspiration and Recognition of Science and Technology”) Robotics Team in its rookie year. Each year, a new game is released – sometimes like basketball with rock climbing, ultimate frisbee along with robotic vision systems, crazy stuff like that – and teams have six weeks to build the best robot they can to play it, and then we go to competition. The experiences I had with The Spring Konstant (our team’s name) – both educational and community-oriented – were really what pushed me to keep pursuing science into college and as a career. 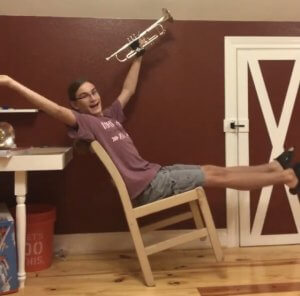 SC: Now you’re in college at Stanford University in California. Why did you choose Stanford? What has it been like there so far?
JD:I chose Stanford for a number of reasons, but I think the most significant one is that they said “You can learn here and we will give you money.” Well, I think they put it a little more formally, but you get the idea. The longer classes go on, and the more people I meet there, the more it feels like I belong, which is great. Since so far everything has been online, I can’t wait to get started with a somewhat normal campus life, hopefully this fall.

Academically, I’ve loved my classes and learned a surprising amount – I knew things would speed up and get more in-depth, but it’s really surpassed my expectations. Socially, I’ve managed to at least meet and get to know a few people despite the difficulty of communication, which is nice.

1 thought on “Interview with Johnny Dollard, a new YouTube voice on the trumpet”