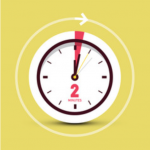 Borrowing from James Clear’s wonderful Atomic Habits, I have been exploring how we can start and strengthen good habits on the trumpet. It could be any habit, but we’ll consider adding a fundamental exercise into our routine today. I already mentioned some ways that we can establish cues, the first step in getting a habit. Today, I’ll look at making that cue stick by sprinkling in a little craving with the two-minute rule.

One of the most important things in forming a good habit, like, for instance, playing a Herbert Clarke technical exercise every day, is repetition. By about the third month of trying a new habit, you are going to automate it. But how do you get there?

Two minute rule. If you can promise yourself that you will do your habit for two minutes only, it becomes a very easy thing to do. Remember to set up your cues as we explored in an earlier post (for instance, write on a sheet of paper, “I will practice Clarke 1 at 8am in my practice room, after I have had coffee”). When you get to your appointed time, get your Clarke book and practice. For only two minutes. When your time is up, put it away. So easy.

After doing this for two weeks, allow yourself to up the practice to three minutes. You’ll probably want to randomize which exercises you do, because you won’t be able to do them all in three minutes. Continue this way for another two weeks–always underwhelming yourself in the amount you practice. But always adding another repetition. Increase to four minutes, then five, then six and seven–each for two weeks.