I have enjoyed putting into Finale the Clarke studies that are in simple meter into triplets. I have been practicing these for at least a year already, but I haven’t gotten around to writing them out until this past week.

Today’s post is a reimagining of the Sixth Study in triplets. As in the other triplet versions, this allows for triple tongue practice with a relationship of one note to one syllable of the triple tongue–but at the same time it remains somewhat faithful to the contours of the original Clarke study. Of course, you can also practice these with other articulations or with slurs throughout. The triplet feel can allow for more fluidity in your playing.

This is the last one of this series, because the Seventh and Eighth Studies are already in triplets. The Ninth Study can simply be extended by one half-step in range to accommodate a triplet or compound feel. And the Tenth Study is not really conducive to this kind of practice.

So without further ado, here is the first page of the Sixth Study in triplets: 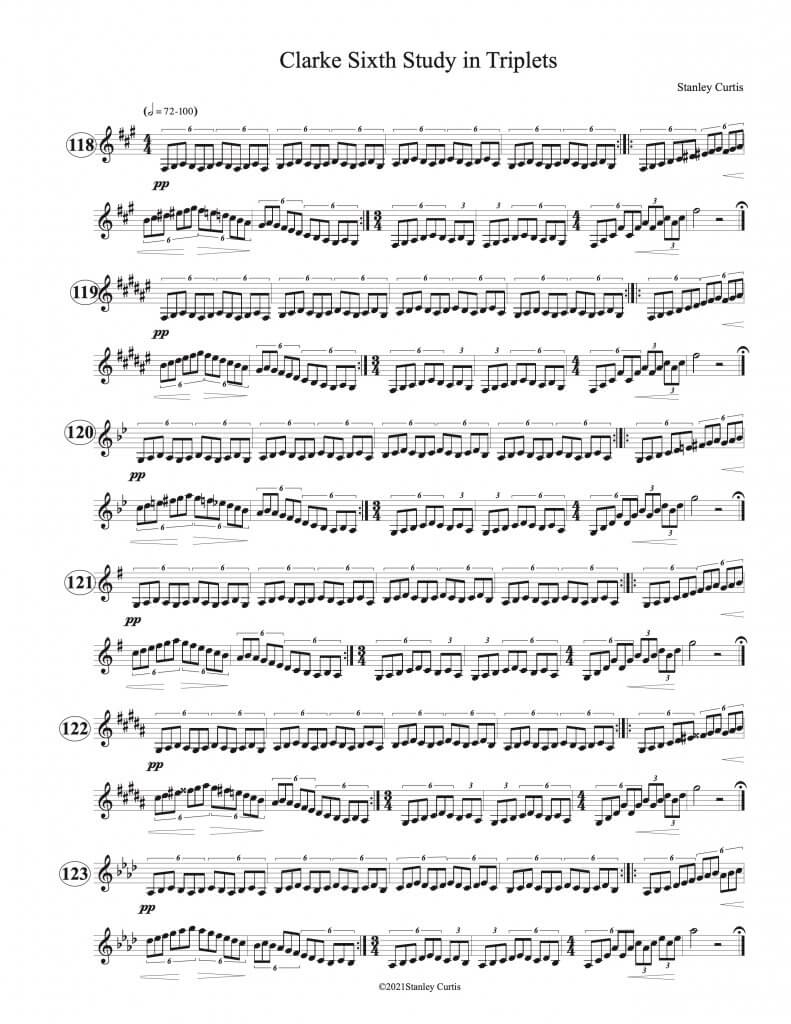 As before, here is a PDF of the whole study, if you would like to have it for practice. Clarke 6 in triplets

1925 Bill Sullivan, American trumpeter, principal of the Utah Symphony, teacher at University of Utah, born in Eureka, Utah.
1947 Ernest Williams, American cornetist, trumpeter and composer, soloist with his family's "orchestra" from an early age, member, then later conductor of the 158th Indiana Volunteer Regiment Band (and other bands during the Spanish-American War), student of his father, Gustave Strube, Paris Chambers and Herbert L. Clarke, soloist with Patrick Gilmore's band (only 7 days), soloist with Sousa's band on tour in England, bandmaster of the Boston Cadet Band (and soloist), publisher, married to Katherine Rankin (with whom he played cornet duets), principal trumpet of the Ballet Russe Orchestra, Victor Herbert's orchestra and the Philadelphia Orchestra, soloist with the Victor Phonograph Company, founder of the Ernest Williams School of Music in the Catskill Mountains, died Saugerties, New York.
2021 Paul Cohen, American jazz trumpeter, began career with Earl Hines Orch, played with bands led by Tommy Dorsey, Artie Shaw, Count Basie, since 1980s fronts his own big band in Florida, died in Pompano, Florida.