After deciding to study music, I went to college as a trumpet performance major. I enjoyed being a student at the University of Alabama (Roll Tide!!).

Michael Johnson, trumpet teacher at the University of Alabama from 1971 to 2003.

My teacher, Mike Johnson, was quite an individual. He had a great studio at the time and somehow inspired us to play great. I cannot say exactly HOW he inspired us, because you would have been hard pressed to find any “teaching philosophy” or fundamental approach that he advocated. I’m not sure he even recruited students. They just came, and he taught. He was a smart, well-read man with a sarcastic sense of humor. His approach to life was skepticism and will power, and I think that appealed to me when I was that age.

The serious players at the University of Alabama would gather at the top floor of the Capstone building around 9 or 10 every night. One of us would take Mike’s studio (everyone had keys). One would set up just down the hall. Another in the stairwell. And a fourth down by the old band room. And we would shed until midnight or longer–each of us in earshot of the other. Each of us challenging the other to play better. There were a lot of Haydns, Hindemiths and Brandenburgs.

I have always had an interest in dusty old things, and I remember that Mike had a Meinl and Lauber baroque trumpet hanging on the wall. He showed me a letter from Ed Tarr. Mike was going to take lessons from Ed earlier in his career, but things didn’t work out. All that was left was that baroque trumpet. I was thrilled that he let me borrow that baroque trumpet in my senior year for an independent study project. I was an funny-looking student, walking around the campus with a baroque trumpet in my hand. The teacher for that independent study was Charles Brewer, and he had microfilm photos of music scores from the palace at Kroměříž (located now in the Czech Republic). I had to transcribe one of the scores by hand into a modern score with parts. 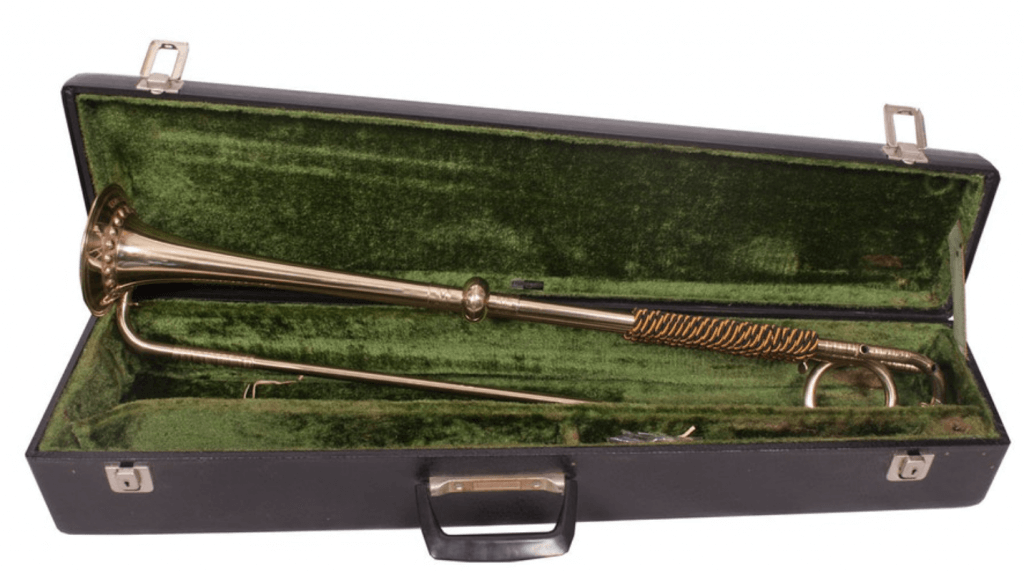 A Meinl and Lauber baroque trumpet. This trumpet was very popular in the 1970s for trumpeters who wanted to be like Ed Tarr.

I do remember having great doubts about my career choice around my junior year. I didn’t really want to be poor or a burden on my parents, so I began to think of the military. I talked to the Navy Recruiter at the student union building about the Nuclear Engineering program. To get a Nuke scholarship (free tuition plus about $1000 a month) all I had to do was take two Calculus-based Physics courses before my senior year. I sailed through the first one but got bogged down in the second course, which was focused on electricity. I wasn’t playing much trumpet. I was in a funk.

I clearly remember my dad having a conversation with me. He not only felt like the Nuclear program was a little dangerous for me, but he also felt like I was selling out. He knew that I loved the trumpet and that my identity was connected to music. Shortly after that conversation, I played a wedding gig, which revived my passion for the trumpet. I withdrew from the second Physics course, and I told the recruiter that I wasn’t going to be a sailor (little did I know that I would actually join the Navy as a trumpeter 13 years later!).

We all have life decisions that can shift our direction dramatically. There is no scientifically-correct answer. My advice is to listen to your heart. Have conversations with trusted friends and family members.