With this article, I am continuing the story of how I became a trumpet player.

My dad, who had played a big part in keeping me on the right track with my music, was a true Southerner. He tried to get me to go to Florida State in Tallahassee, Florida. I think he also wanted to visit me on the way to the beach! I auditioned there, but I really wanted to improve my orchestral playing. Florida State and Bryan Goff (the trumpet professor at Florida State at that time) didn’t seem to offer that skill as much as I was hoping for, so I decided against FSU. Sorry, Dad–no beach trips while visiting me there!

I had also auditioned at Eastman to study with Barbara Butler or Charlie Geyer, but that audition didn’t go quite well enough. I don’t think Prof. Butler was impressed with my jury-rigged E-flat trumpet made from an Olds Ambassador–or my insecure playing on it. 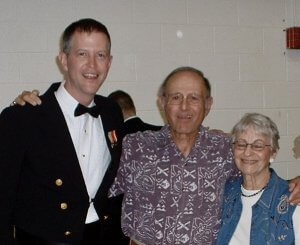 A later photo of me on tour in Florida with the U.S. Navy Band. Bernie Adelstein and his wife Connie came out to hear us.

But I also auditioned at the Cleveland Institute of Music. I found a great connection with Bernie Adelstein, who taught there and was the principal trumpet at the Cleveland Orchestra (the two other teachers at that time were James Darling and David Zauder). Moreover, I had an older trumpet friend from Alabama who had already gone to CIM, studied with Bernie, and then won an orchestra job. His name was John Drissel. Really, it’s those personal connections that make the most difference in one’s life. Mr. Adelstein liked the fact that I had good grades (why? I don’t know! He was a very un-academic trumpeter!). He offered me a modest scholarship to go to CIM and my parents gave me the green light, so I went to CIM.

At CIM, I met some great fellow students, including Geoff Hardcastle (now in the Buffalo Philharmonic), Greg Gilmore, Richard Bailey and Ryan Anthony (who became quite famous as a member of the Canadian Brass and principal of the Dallas Symphony). Geoff, a very humorous friend, was a former student of Jimmy Stamp. Listening to his mouthpiece warmup really impressed me and changed my approach and, later, my tone forever.

Of course, I was also impressed with Ryan. But I’m not sure his playing really influenced my own, because it was so natural and of such a high quality, that I didn’t know how to play like him. I am sure a lot of other trumpeters thought the same way about Ryan’s playing.

The focus on orchestral playing there was terrific. We had about three concerts per semester, but the seating in the trumpet section was never permanent for the semester. For each concert, Mr. Adelstein and the school conductor, Carl Topilow, would audition the trumpets. The winner got to play principal for the plum literature, and the runner-up got to play first on the concerto. It was very motivating!

By the time I was ready to graduate from CIM, Ryan and Geoff had just locked up all of the gigs in the Cleveland area (like the Akron Symphony and the Canton Symphony). There wasn’t much for me to do in the area. I was not looking forward to going back to Alabama with no future prospects.

Around the same time, Bernie Adelstein decided to retire from the Cleveland Orchestra. He was offered a teaching position at Indiana University, one of the best and biggest schools of music in the world. Toward the end of my studies at CIM, he sat me down and asked if I would consider being his teaching assistant there. That was destiny. I didn’t see that coming, but I realized what a great opportunity it was, so I immediately accepted.

Another step up on my trumpet ladder.