I have enjoyed reminiscing about my doctoral studies at Indiana University. In fact, yesterday after posting my memories of social life at IU, I was able to reconnect with two long-lost friends.

I moved out of the graduate dorm and into my own apartment in my third year. I also changed my trumpet teacher. I felt like I had stopped growing in Mr. Adelstein’s studio after four total years of working with him, and so I had that awkward conversation with one of my most influential teachers about switching teachers. Mr. Gorham had informally offered me a Teaching Assistantship position in his studio, and I wanted to accept. It’s always fine to leave a teacher, but when you switch teachers in the same school, it can be difficult for everyone. Bernie took the news well I’m happy to say. 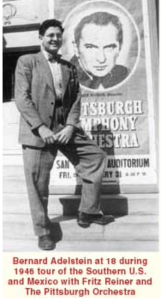 Mr. Adelstein was all about the orchestral standard of trumpet playing that he had acquired during his 50 years of performing (starting at age 15 with the Ballet Russe de Monte Carlo and then at 16 with the Pittsburgh Symphony Orchestra under Fritz Reiner). As a student of Mr. Adelstein, you either did the right thing or the wrong thing. Too fast, too flat, too short—or just fine.

Mr. Gorham, on the other hand, was not black-and-white. He was more about subtlety. He was about unlimited potential. If I had studied first with Mr. Gorham, I’m not sure I would have grasped the essentials of an orchestral style as well. But Charles Gorham added to that basic foundation with sophisticated ideas of phrasing and timbral changes. He was a fantastic teacher of solo repertoire, and he always had extra time for me when I needed it. Here’s an interview with Mr. Gorham that David Monette did in 2008. Monette was a former student of Gorham.

By this time at IU, I had won a small job with the Columbus, Indiana, Pro Musica Orchestra under the baton of David Bowden. It was about an hour’s drive away from Bloomington, and a great part-time orchestra job. I remember driving too fast on that beautiful highway 46, winding through the countryside in order to not be late for those rehearsals.

I got into the National Repertory Orchestra again in the summer of 1991, rooming with Ryan Anthony. During that summer, I learned so much from just listening to him play. He showed me how he prepared Bach’s Brandenburg Concerto No. 2 by playing the whole part on a large B-flat trumpet–but at the correct pitch and pretty loud. This was so difficult that when you were able to do it, the piccolo trumpet was a piece of cake. 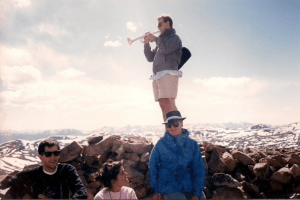 1991 photo of Me, violinist Dorothea Nichols, Pat Sarracco (playing trumpet) and unidentified musician in the NRO on the Loveland Pass (about 14K feet above sea level).

Melissa and Pat Sarracco drove out to Colorado to visit during that summer, and it was so nice to hike around with my girlfriend and friend for a few days.

On the last day of NRO, I drove straight back to Indiana without stopping to play a gig with the Columbus Pro Musica Orchestra. Then I auditioned for a combined teaching and playing job about two hours south of Bloomington–playing principal in the Evansville Philharmonic (under Alfred Savia), assistant principal in the Owensboro (Kentucky) Symphony Orchestra (playing with principal trumpeter John Schlabach), and teaching at the University of Evansville. I won the job! It was an exhilarating feeling! It only paid $16,000 dollars a year, but it was a job with benefits. I withdrew from Indiana and got an apartment in Evansville. 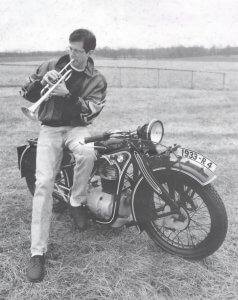 I think my first concert with the Evansville Philharmonic was Respighi’s Pines of Rome with it’s famous offstage trumpet part. My parents drove up from Alabama to hear it. My studio at the University of Evansville (go Purple Aces!) was small, but nice. I also taught some high school students in the area that were quite good–Andrew Brunner and Ben Wright (now in the Boston Symphony), both of whom won the local concerto competition.

At the U of E, I played in the faculty brass trio with Bill Boots (trombone) and Chris Smith (horn; now teacher at Texas Tech). I think because of the two orchestras I played in, the recitals I gave and especially the work I did with the brass trio, I was in the strongest shape I have ever been at that time.

It wasn’t the end of my time at IU. I would drive up to IU to visit Melissa about once a month, and, while there, I would take a lesson from Mr. Gorham. Big changes in my career were still ahead.