I lived in Evansville, Indiana for two years. As I mentioned yesterday, I still drove the two and a half hours north to Bloomington frequently to see my girlfriend, Melissa, and take lessons from Charles Gorham.

My apartment was a room in an old antebellum style home. I don’t know–it could really have been made in the mid-19th century. It had a view of the Ohio river, which at that point of the river was incredibly wide. Evansville was a city founded in large part on German immigrants, so they had things like “pig brain sandwiches.” But the people I met were very interested in music and what I did. They were supportive of culture.

There were five other consortium hires. John Tafoya was the percussionist (now professor at Indiana University), Pierre Roy was the oboist (he was with the Buffalo Philharmonic, but was fired from his job there in 2012 because of disruptive behavior with his colleagues), Chris Smith was the horn player (now professor at Texas Tech). On flute was Curtis Pendleton, who is now an executive arts director in Vancouver. The cellist was Davy Eby, who is now a member of the Bodhi Trio and the Oregon Symphony. 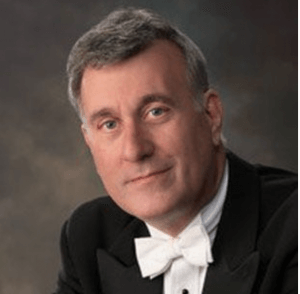 I only earned $16,000 per year when I was doing this consortium job. Alfred Savia, who was the conductor of the Evansville Philharmonic, gave me an extra job to help. I arranged music for the consortium, an unusual instrumentation, so that we could do chamber concerts.

Often they were for children, so I took an Indian folktale about a grandmother who escapes being eaten in the dangerous jungle by traveling in a rolling pumpkin. I took classical music like Mendelssohn’s Spinning Song and de Falla’s El Amor Brujo and arranged them for the consortium.

I remember one time we were playing for a nursing home, and during the whole concert, we heard the man at the back of the room yelling, “I need a shot! Give me a shot!” We also played at a kind of retirement home. A resident there, who liked our playing, left for a while, and then she cam back with her dulcimer. And then she started to play with us–badly and with determination! During these times, we worked very hard to not laugh while we played. Lip biting helped. 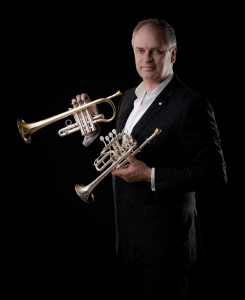 While working in Evansville, I decided to compete in some trumpet competitions. In 1992, I was made it into the semi-final round of the difficult Ellsworth Smith Trumpet competition, which was the year Jens Lindemann won that. I noticed how Jens had played from memory. 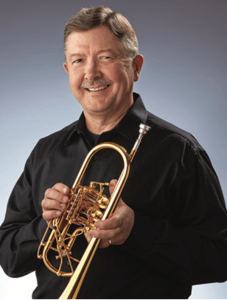 So, in 1993, I prepared for the even-more demanding Munich Competition and tried to memorize everything. I arranged with Mr. Gorham to come up to IU and play the Munich Competition repertoire on a special recital. He mentioned this to Marvin (“Chappy”) Perry, who was principal trumpet of the Indianapolis Symphony during this time. I practiced hours a day in the weeks leading up to this recital.

When I got to campus, I found out Chappy had to come hear me, driving his motorcycle in the snow. The extra practice and the extra pressure of having Chappy come hear me somehow got to me. I wound up not being able to even finish the recital. I was too tired. I was humiliated. Somehow I bounced back to my final preparations and flew to Munich.

During the semi-final round in Munich, I played the Haydn Trumpet Concerto and the Charles Whittenberg Polyphony, a very difficult unaccompanied piece. I was pretty proud of my playing from memory, but in talking was Anthony Plog (one of the judges) after that round, it turned out that I had not held the long notes in the Whittenberg for the correct lengths. Also, Ed Tarr, another of the judges, told me that my cadenza for the Haydn was too ostentatious. They had good points.

I learned hard lessons for both of these competitions. I learned lessons from Evansville. I grew.