My last year of study at Indiana University was the academic year 1993-94. During the summer before school I had proposed to Melissa, and we were making plans for a wedding in June of 1994. We had moved in with some friends to share a house.

During the fall of 1993, I became heavily involved in the Early Music Institute, performing with the IU Baroque Orchestra. On the first program I played the trumpet obligato aria “Destero dall’empia dite” from Handel’s opera Amadigi di Gaula. I also played Telemann’s Tafel Music Suite No. 2, Biber’s Sonata IV. At the end of the season, Stanley Ritchie wanted me to play Bach’s Brandenburg Concerto No. 2 on baroque trumpet, which was a problem, because my trumpet didn’t play in the right pitch. Rick Seraphinoff had made the trumpet to play in C and D, but not in F, but he had some ideas.

I was taking an independent course in instrument repair from Rick, so together we cut his instrument a little, made new connecting pipes and bends for the corpus of this very practical (but not very authentic) instrument, so that it could now also play in E-flat, E and F (baroque pitch). The only thing left was to learn how to play the Brandenburg on this instrument. 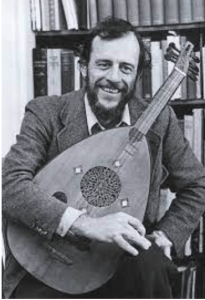 Meanwhile, I was taking a course in Renaissance performance practice from the amazing professor, Thomas Binkley, who had studied and performed extensively in Europe as a lutenist before returning to the U.S. to be the first director of IU’s Early Music Institute. During the first week of my class with Prof. Binkley, a fellow student offered to sell me a Christopher Monk “resin” cornetto. She couldn’t play it and offered it to me for $30. I jumped all over that and started taking lessons on it from Rick Seraphinoff. Rick didn’t really know how to play it, but he knew some sources, and we explored together the fingerings and articulations. Later in the year I remember taking a lesson from an IU alum–the great Bruce Dickey.

I remember one time when I was practicing my new cornetto in a practice room in the Music Annex, Thomas Binkley opened the door and chatted with me. He listed to me play with the historic articulations that was struggling with. I’ll never forget what he taught me in that conversation. He suggested how, instead of trying to use the Italian syllables in the Dalla Casa Il Vero Modo, I could instead think of my own language. He said it was totally authentic and correct to think of one’s own language when trying to articulate a Renaissance wind instrument. He was an original thinker.

Meanwhile, modern trumpet with Prof. Gorham continued. I remember a particular trumpet student in Gorham’s studio named Todd Craven. About the second week’s studio class, Todd played about a half minute of the Jolivet Concertino. It was okay. Then the next week a little more, and more polished. And so it went, over the fall semester, that Jolivet got better and more of it got played, until it was polished gem stone. 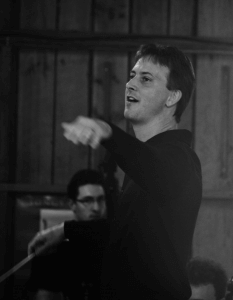 There was a brass concerto competition every year, and I decided I would try. I had been playing the Tomasi Concerto, but my preparation was much more haphazard than Todd’s. In addition, my overall technique for playing this piece really wasn’t at the place it needed to be. I did put in the time, and I had some good musical ideas that I had figured out about this piece over the past few years, but I had no illusions about the competition. When we had played our pieces for the panel of teachers, I was surprised to find out I had won! In talking to Allan Dean, who still taught at IU at the time, the decision came down to musicality. That was an interesting lesson for me, because I still think Todd had played a cleaner performance. Todd, after many years as principal trumpet with the Florida West Coast Symphony, is now an accomplished conductor, and I’m sure I could learn a few things from him about musicality. About a month later, I finally performed the Tomasi with orchestra, with Thomas Baldner conducting. I had learned it from memory and practiced it about a million times. It was a thrilling experience.

Still later in the spring semester, the Brandenburg loomed. Again, I practiced it a lot. I remember even cutting my lips from the pressure and fatigue, but I had enough time to recover, and I was able to play the piece well. Prof. Ritchie was happy. Mr. Gorham was happy. My old teacher, Mr. Adelstein, was happy (but he didn’t completely approve of the fast tempo of the last movement or the near-absence of a ritard at the end). 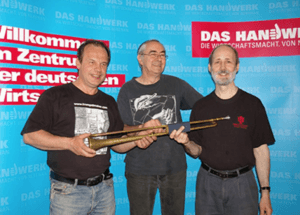 As we worked together in his shop, Rick and I talked about the possibility of hosting a baroque trumpet making workshop on campus for the following summer–with Robert Barclay supervising. Rick eventually got that planned, and we had about about eight participants working for a week in an IU art department workshop. One of the participants was Fred Holmgren, a unique person and very important player in the 90s in the U.S. That workshop turned into a tradition that has continued to this day. Nowadays, German baroque trumpet maker, Michael Münkwitz is a partner with Rick. They offer one workshop in Bloomington and another in Germany every summer. It’s a great way to make your own baroque trumpet for not too much money, and I recommend it every chance I get.

At the last part of the spring semester, I found out the great news that I had been awarded the Fulbright Scholarship to study baroque trumpet with Friedemann Immer in the Netherlands.

We were married in Atlanta on June 18, 1994. We had a wonderful ceremony with my parents and brothers, all of Melissa’s family and many of our school friends. Pat Sarracco played trumpet during the wedding. During the reception, I actually played “Misty” with the jazz combo that we had hired for the occasion. 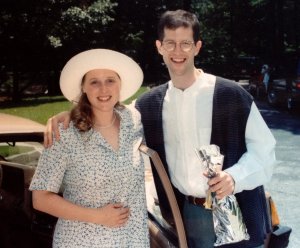 Getting away from the wedding

We eventually left with a bottle of champagne and went to Melissa’s grandparents’ house on Lake Burton in North Georgia. The next day, we had all of our IU friends join us. It was a lot of fun, but it was a kind of end to that wonderful chapter in our lives.

Melissa and I had an even more impressive second honeymoon to prepare for. We had to get ready for Europe.