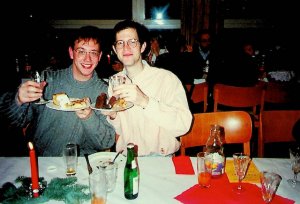 Studying at the Sweelinck Conservatorium in Amsterdam was a great experience, but doing professional work outside of the the school was even better. Mark Vondenhoff, who has remained a great friend over the years, in large part helped me get these opportunities. He had already organized a brass ensemble called the Tell Brass, so he had good connections and a knack for contracting.

One of the first projects I did was a Bach, B-minor Mass with Mark and another Dutch baroque trumpeter, Ralph Henssen. I remember how cold it was in the Utrecht Dom Kerk (Cathedral)–because after the performance, there was about a cup of condensation that had been blown out under my trumpet. But so many people came to hear this wonderful performance (sitting in their coats). It was gratifying. Ralph is now a musicologist at the University of Utrecht and is a fantastic collector of old brass instruments. 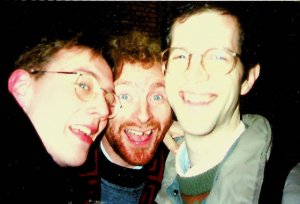 Another interesting project was with Mark and Henk van Benthem, another student at the Conservatorium. Henk had gotten the gig (Bach’s Magnificat) and was going to drive us to the rehearsal in Düsseldorf, Germany, in his car. When we started, he handed his handwritten directions to me, so that I could help with directions, but there was no way I could read these little Dutch scribbles. He said it didn’t matter, because all we had to do was go to the Kaiser street in Düsseldorf, find the Evangelisch Church, and we would be there. No problem.

We got to Dusseldorf, found the Kaiser street, found the Evangelisch Church–it even had a sign in front of the church about the Magnificat musical program. It was near Christmas time, so there was a lot of traffic. We decided to find a public parking lot and walk back to the church. We got in the building about 20 minutes later–lots of musicians were getting ready for the rehearsal. We asked one of the musicians where our contact was–the conductor. The musician said there wasn’t a conductor there by that name. We said that we were there to play the J.S. Bach Magnificat. But this other musician said that at this church they were playing the Magnificat by Johann Christian Bach. 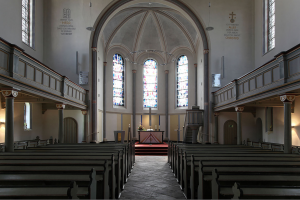 The Evangelisch Church in Haan

After finally getting back in the car, we finally asked directions. It turns out that we needed to go to a nearby city called Düsseldorf-Haan, a much smaller, nearby city, which had a Kaiser street, an Evangelisch church, a J.S. Bach Magnificat rehearsal (already underway when we arrived).

There were quite a few other great gigs that I was able to do while a student in Amsterdam. The music making and the friends I made were terrific.