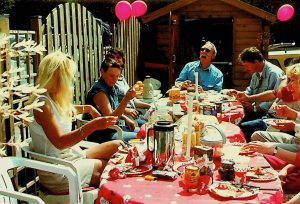 Melissa and I really enjoyed living in the Netherlands. We had great dog-owning friends that we would meet at Ooster Park. Dave and Els. They had a beautiful Dalmatian named Djedje. I remember how, during the winter, Dave said how strong the ice got–he said you could easily walk across the Ooster Park pond. He put one of his legs out on the ice to demonstrate, and–you guessed it–his leg went through the ice, getting wet all the way to his knee. He laughed and laughed at this! 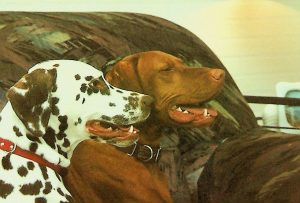 We also went to a re-make of the Disney movie 101 Dalmatians in a small village in Holland. The event was organized by the Dalmatian society there, so there was a little Dalmatian parade. After that, we all went into a movie theater with our dogs and watched the movie. In the movie there are a lot of barking dogs, and every time there was barking, all of the dog-audience barked, too. It was hilarious. 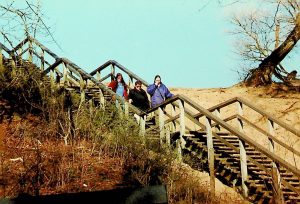 Dave and Els took us to the beach in the winter, and we watched our dogs run around. It was cold, so Dave offered us Zout Drop, a salty type of licorice. It was so different than American licorice, but strangely  good on those windy, cold beaches.

Melissa’s mom, Lori, got a chance to visit with us, and they went on a little trip around the country, while I was doing baroque trumpet gigs.

Towards the end of the year, Friedemann Immer, my teacher, pulled me aside to encourage me to study one more year at the Sweelinck Conservatorium. He said that I would soon be getting the lion’s share of gigs in the Netherlands. That was a real temptation for me, but I didn’t have permission to really legally work in the Netherlands, so I only got paid in cash. Melissa and I realized we needed to find steady employment with benefits to keep us going. We couldn’t stay.

However, one of my friends put me in touch with Aigi Hurn, the principal trumpeter of the Orquesta Sinfónica de Galicia (“OSG”). Aigi was an American graduate of Eastman School of Music. He had also played in the Hong Kong Philharmonic. The OSG was doing a two-week Mahler project at the end of the program year, and they needed another trumpeter. They also had an opening for a third/assistant principal trumpet player in the orchestra–there would be an audition during the Mahler project. So, I was offered a great gig with travel expenses paid for. And I would be there for the audition. Of course, I was excited about this, and I think Melissa was, too. It was a chance for us to continue to extend our “honeymoon!”

Of course, it was great to visit Spain and play with this really nice orchestra made up of a mixture of Spanish and international musicians. Most were pretty young. It was fantastic to play next to the other trumpeters to get an idea of how they liked to play. When the audition happened, I felt really great about it–and, I am happy to say, I won!

But now we had to move again. Now we had to start learning Spanish. There were to be a lot of opportunities in the near future for me to mangle that language–as you will see.