Melissa and I moved to Spain in the fall of 1995, and I began to play for the Orquesta Sinfónica de Galicia. The principal trumpet was Aigi Hurn and the second trumpet was Michael Halpern. Both were Americans who had been playing in La Coruña already for a couple of years (the orchestra was founded in 1993). Aigi was gregarious. He had previously played in the Hong Kong Philharmonic, and he drove a pretty cool BMW around that Spanish coastal town.

By the way, “La Coruña” was the name of the city in Castilian, but in the native dialect of Gallego, the name was “A Coruna.” 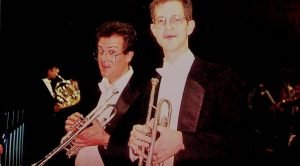 Michael Halpern and myself

Michael was not an extrovert. He had come to Spain by way of Italy–he had played in the opera orchestra of Milan. Michael had perfect pitch, and when he wanted to pass the time in a rehearsal, he would put his cup mute in and play along with the violins so perfectly that the conductor never noticed. 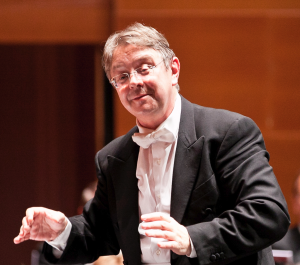 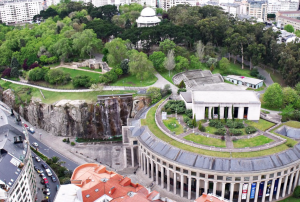 I walked down the hill from our apartment on Avenida Finisterre to the Palacio de Congresos. I then cut through the parque de Santa Margarida. It smelled wonderfully, because it had been planted with hundreds of eucalyptus trees decades before. There were a lot of marble statues in the park. In fact there were usually sculptors working on new statues everyday–they would work for months and months on the same statue. There was also one of those spherically-cut granite boulders mounted on a kind of fountain, so that it effortlessly rolled in any direction. 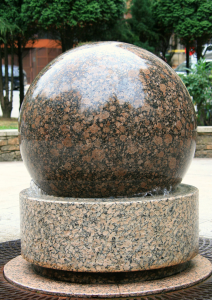 Many people on the street thought I was a mormon because I was tall, American, and had an unusual backpack (my trumpet case). Once, some real mormons were in this park and started to walk towards Melissa and me–hoping to talk to us about religion. With a twinkle in my eye, I told Melissa to let me talk to them. When they started talking to us, I answered in Dutch. I knew enough Dutch still at this point that it might have been convincing. They tried to speak to us in Spanish–and then in English, but I would only reply in Dutch. Exasperated, they finally left us, and Melissa and I had a little laugh.

We usually took our rehearsal breaks across the street at a little cafe run by a couple–José and Maruxia, who adhered to a macrobiotic diet. Many of us were vegetarians, and we were vegans, so that was perfect. Maruxia would make avocado sandwiches with homemade mayonnaise for these little snack breaks. There were always old guys in the back of the cafe playing dominoes. Every few minutes one of them would make a definitive move and slam his domino down on the table–hard! Melissa and I liked to eat at an Italian restaurant on our street called La Favola. It had the best Spaghetti Aglio e Olio–spice and delicious. 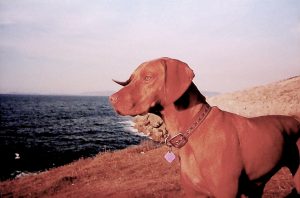 Béla at the Galician coast

We still had Béla, our Hungarian pointer. I often went running with Béla on a trail that went along the coastline. There was a very steep slope down the rocky coastline to the water. I would take a fabric frisbee and throw it for Béla–he loved catching frisbees. I could even throw it out toward the water–because the wind from the ocean would blow it right back. Except when it didn’t, and I had to climb down the cliffs to get the frisbee. Occasionally I would run past a kind of cardboard village of Romami. As I ran past in my running shorts and t-shirt, teenage boys would ask me for a cigarette. And when they were convinced I didn’t have a cigarette, then they would ask if they could have my dog. 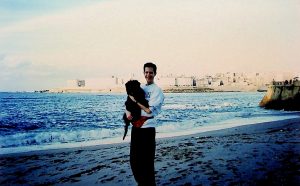 Me and Pomba at the beach

We also got another dog in Spain–a “Gos d’atura” (Catalan sheepdog). Her name was Pomba. The two dogs got along well, and we took them to play with other dog friends a lot.

Basically, Spain was a paradise for us in many ways.

4 thoughts on “Getting situated in La Coruña”