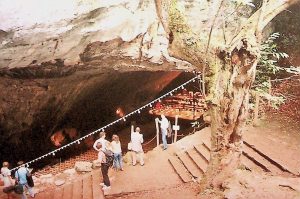 The Witch Cave of Zugarramurdi in Navarra

I began playing with the Orquesta Sinfónica de Galicia (OSG) in August of 1995. The first concert included Mussorgsky’s Night on Bald Mountain, Borodin’s Polovtsian Dances, and Prokofiev’s Alexander Nevsky.  We played Orff’s Carmina Burana and Bizet’s Carmen Prelude in San Sebastian and Navarra–in the Basque country. We played a concert in Santander. My friend, Jim Ross, a horn player in the OSG and also a fine conductor, conducted us in Stravinsky’s Pulcinella. 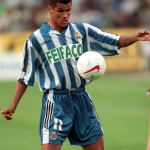 Soccer player, Rivaldo, who once played for Deportivo La Coruña

Whenever we went to other cities in Spain to perform, we would get an envelope with cash money inside for our per diem. Sometimes we went by bus, sometimes by plane. In 1996, at the airport in La Coruña (Alvedro Airport), I once helped out a tall, athletic guy with his child and luggage–he had his hands full. It turned out to be the famous Brazilian soccer player Rivaldo, who was playing for the Galician team, Deportivo. Of course, at the time, I had no idea who he was. 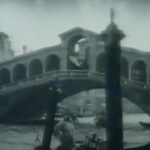 A scene from the silent film Casanova

In September of 1995 we did Delerue’s score for the 1986 restoration of the 1927 film, Casanova, starring Ivan Mosjoukine. We played this in an old theater in La Coruña and also in Madrid. This was very difficult, because we had to time the live music exactly with the film. But it was really interesting. We had interesting guest conductors, like Ron Goodwin, the late British film composer–we did a pops concerts with him. Occasionally we did a chamber concert, too. I played a Stravinsky Octet with Jim Ross conducting at the Teatro Rosalia.

In October we played Beethoven 5 and Brahms 2, doing a performance in the National Auditorium of Madrid. We also did a recording of Sorozábal’s La Taberna del Puerto, which is a type of Spanish light opera called a Zarzuela. 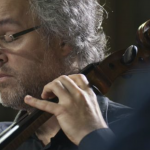 Bruckner 7 came in November with run-outs to Sevilla, Córdoba and Granada. My French friend from Indiana University, David Etheve, who was principal cello at the OSG, played a Lalo Concerto–he died in 2016 of brain cancer. And in December, we did Rachmaninoff 3 and Shostakovich 10.

The Palacio de Congressos was not exclusively for the OSG. Other groups came as well. I’ll never forget hearing Mark Bennet playing the Telelmann Concerto with The English Consort in January of 1996. He was fabulous. He invited me to eat out with him, Trevor Pinnock and the others afterwards. Also in January, Aigi, the principal trumpeter, played the Arutunian. His performance was really exciting and loud (loud in a good way!).

One of the big features of February, 1996, was Prokofiev’s Romeo and Juliet (and for much of the rest of the next few months. In March, we did West Side Story, and in April, Petrouchka. The magnificent Verdi Requiem and Mahler 1 came in May. Also we did a couple of operas in May: Turandot and The Clemenza de Tito.

One thing I loved about being in the trumpet section. We would sit down at the beginning of the season and figure out the trumpet needs of every concert. Some needed four or more–so we had to ask other trumpeters from the area to join us. Some need three, and we all needed to be there. Some only needed two, one, or even no trumpets. After figuring that out, we wound up with about six additional weeks of vacation. This was amazing.