The OSG 1996-97 season started out with the Third Music Festival of La Coruña, a city on the North Coast of Galicia in Spain. Everyone of these concerts had Spanish music, and with a special attention on Manuel de Falla: La vida breve, El sombrero de tres picos, El amor brujo, and his Concerto for piano in D. We went, as we often did, on a run-out to Santiago de Compostela, which is the city with the famous cathedral basilica–the goal of the Camino de Santiago, reputedly with the remains of St. James. 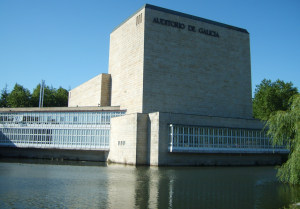 There, we would play at the Auditorio de Galicia, which was beautifully situated on some water. After we played our concert, the hosts would treat us to wine and some seafood, like pulpo (which is octopus). Since I was vegan, I didn’t eat this, but would give it to one of my friends or stick the little tentacled arm onto my wine glass after I had finished. Even after cooking, the tentacle would remain fixed on the surface for an hour or more! Silly pranks. 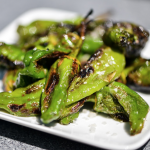 One thing Melissa and I loved to eat was a tapa called Pimientos de Padrón. These were little green peppers cooked in olive oil and salt. Most of these peppers in were mild, but a few were like firecrackers in your mouth. So it was a game of Russian roulette, or, I guess, “Galician roulette.” 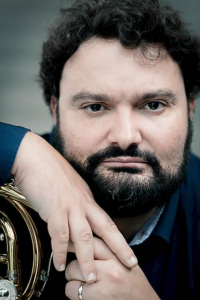 In October and November, the orchestra programed Bruckner 6 and Shostakovich 6. The OSG also supported an educational project called La Escuela de Práctica Orquestal, in which members of the OSG would work with young musicians in the area–coaching and conducting them for performances. I got a chance to conduct a brass group on a Renaissance suite by Tilman Susato, which was great for me, with my early music training. The OSG also featured my horn-playing friend, Tomás Gallart, on Haydn’s Concerto No. 1 in D major. He had such a beautiful and light approach on the horn–and a fantastic high range. Tomás now plays in Zürich.

We ended November with a de Falla run-out to the beautiful coastal city of Vigo with its stunning “ria”–an inlet of water, similar to a “fjord.” 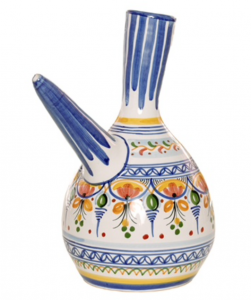 I can’t remember whether it was in Vigo or Santiago, but there was a bar we sometimes went to. In this bar, you were served a pitcher with a strong wine called Porrón. You had to pour the wine from the spout into your mouth, and the only food they served was peanuts in their shells, which they simply dumped onto the table top–and when you cracked open the peanut shells, you simply dumped them onto the floor.

Which reminds me of a kind of Spanish philosophy about garbage that was a little different than the U.S. In Spain, people were less careful about litter. They would often throw things on the ground, and this left me a little uncomfortable. But every night, the cleaning crew (“limpieza”) would come out. By the next morning, everything was amazingly clean again!