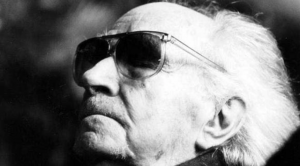 One of my jobs in the OSG trumpet section was to play first on concertos. In 1996, I got to play first on Joaquín Rodrigo’s Pastoral Concerto for Flute, and Rodrigo himself was present for the rehearsal. This was at the very end of his life, so it was interesting that I had met an incredibly famous composer, born in 1901. His flute concerto was a little tricky for trumpet, but wasn’t quite as interesting as his famous Concierto de Aranjuez. 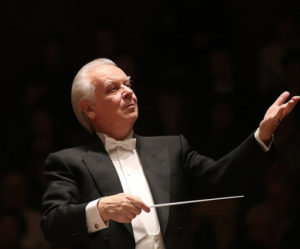 One of the best guest conductors I worked with at the OSG was Yuri Simonov, who had been the principal conductor of the Bolshoi Theater Orchestra. We did a New Years program of Glinka’s Ruslan and Lyudmila Overture, Berlioz’s Damnation of Faust and a bunch of Johann Strauss waltzes. His sense of rubato was probably the best and easiest to follow of any conductor I have worked with.

Right after that, Aigi (the principal trumpet in the OSG), Jon Etterbeek (an American trombonist who played second in the OSG at that time), a German named Traugott Graser and I played a brass quartet concert of Christmas music and music for Three King’s Day. 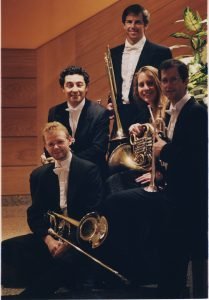 I also played with the Brass Quintet of the OSG. Aigi Hurn and myself played trumpet. Also in the group were Amy Schimmelman, an American, on horn, Jon Etterbeek on tenor trombone and Petur Eiriksson, from Iceland, on bass trombone. Amy and Petur were married and went on to have three boys in Spain. After I left Spain, Aigi married a Galician woman named Olga and went on to have three boys as well. Since those wonderful times, we have lost both Aigi and Petur. They both died of cancer. This has been a terrible loss to me personally, as well as a significant musical loss to us all.

Here is a video of Aigi performing the Blumine from Mahler Symphony No. 1.

Later in this season, we played the fantastic Lutoslawski Concerto for Orchestra, the Prokofiev Symphony No. 3 and the Britten Young Person’s Guide to the Orchestra in January of 1997. Since I was third/assistant principal trumpet, I got to play played first on all of the Beethoven piano concertos, going to the Auditorio Nacional in Madrid. I also got to play first on the Ravel Piano Concerto in G.

Later in March, Jim Ross conducted us in a magnificent program of Respighi’s The Birds and Stravinsky’s The Rite of Spring, which we took to Vigo. We took Mussorgsky’s Pictures at an Exhibition to Vigo and programmed Brahm’s German Requiem also in March. 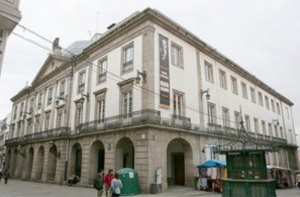 In April, I got a chance to play Stravinsky’s The Soldier’s Tale in the Teatro Rosalia in La Coruña. We also did Sibelius Symphony No. 1 and Hindemith’s Symphonic Metamorphosis, which we took to Barcelona’s Palau de la Música.

Capitalizing on our conductor’s affiliation with both the OSG and the Orquesta Sinfónica de Tenerife, both of these orchestras combined forces to perform Mahler’s Symphony No. 2 with huge forces. First, OST came to La Coruña, and then we went to Tenerife. This was an incredible experience musically, and, for me personally, to visit Tenerife. We got a chance to collaborate with a great section. I played on stage for the first concert and offstage for the second. 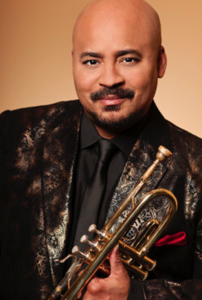 Rodney Marsalis (then going by the last name, Mack) was playing principal in Tenerife. Also Steve Leisring was playing in that orchestra at the time. Both of these trumpeters have gone on to great things–Rodney now leads the Philadelphia Big Brass and Steve is the trumpet professor at the University of Kansas.

During this time, I remember taking a couple of auditions. One, for principal trumpet in the Gulbenkian Foundation Orchestra in Lisbon, where I was the apparent winner–however, they wanted to have another audition to “make sure.” This second audition was impossible for me to attend. The other audition was for principal in the Barcelona Symphony Orchestra. I advanced to the semi-finals, but Petrouchka didn’t cooperate. This audition was won by Rodney Marsalis, who, by the way, performed Petrouchka on an F trumpet. This convinced me how great a choice this was for the “Ballerina’s Dance.”

There was a tragic instance, later on, where undercover police in Barcelona mistook Rodney for a suspect. They were dressed in jeans and leather jackets, and they brutally attacked Rodney from behind without warning, choking and kicking him on the ground. They finally stopped when he said he was from the United States. This turned out to be a major scandal for the Barcelona police and prompted Rodney to leave Spain for this event, which required him to be in physical therapy for a few years. The chief of police of Barcelona had to travel to Madrid to apologize in front of the Spanish Parliament.

During the summer of 1997, Melissa and I were able to borrow our friends’ car to make a car trip across Spain. We went all the way to Barcelona and back. But not before making the terrible mistake of requesting the wrong kind of fuel on a different car. An old Fiat belonging to our friends, Peter and Amy.

We needed to borrow their car because we were house-sitting and dog-sitting for them. This was the first time we had ever filled up at a service station. In Spain, gas stations were full-service, so you had to request the attendant to give you whatever you needed. The Spanish word for gasoline was “gasolina” but the word for diesel fuel was “gasóleo.” The attendant asked us what we wanted, and, upon hearing the word “gasóleo,” we insisted on that. About a kilometer after leaving the station, we knew we had made an grave error, with dark smoke billowing behind. We had the car towed to their house, and they were later able to miraculously get the car fixed.