After we found out that I had won the position in the U.S. Navy Band, Melissa and I began to say our good-byes. We packed up our things and stored them in the garage of our friends–the U.S. government would pick these things up and ship them to us, when we settled in Washington, DC. I flew off to Germany and then to Washington. Melissa flew to Atlanta to wait for me.

When I arrived in Chicago, I got in a white government van that took me to the Great Lakes Training Center, where all Navy recruits go for basic training. Everything looked American, but normal in that trip past Northern Chicago urban buildings. I was passing people doing normal things. I wouldn’t see that again for about 12 weeks.

When I got there, I experienced the things recruits usually experience. They screamed at me for not signing the paperwork correctly in the lines, they shaved my head, they gave me a wardrobe of blue sweatpants and sweatshirt. The gave me shoes, towels and some toiletries. We had to put all of our civilian clothes and valuables into a bag that they sealed up. We were taken to a barracks and started our bizarre journey through boot camp. I was in Division 918–a group that played music for the graduations of other divisions (once we were ready).

We had two sadistic Recruit Division Commanders (RDCs)–of course, this was normal. I was tall, so I was a “stick” man when we marched (meaning I had to hold a flag pole). The RDCs knew that I was destined to go to the band in Washington, so they asked me to have my trumpet sent to our barracks. They wanted me to play Taps and Reveille.

About two weeks in, I was sent to the chaplain’s office to receive a telephone call from my mom. My oldest brother, Rob, had gone into a diabetic-induced coma. He was not going to live long. So, I obtained an emergency leave. By this time in my training , I had a set of “dungarees,” but I didn’t have any uniform appropriate for traveling, so I was sent to this warehouse on base that had a bunch of used “cracker jack” uniforms in Navy Blue (which is black). I wound up with a top and bottom to this uniform, but I didn’t have a neckerchief (a required part of the uniform).  My hat for this uniform, a “dixie cup,” was too big and it flopped around. After I gathered these things into my duffle bag, I was told to meet the airport shuttle at the designated place. The problem was that I had no idea where this place was. It was a very big base, and I had not been allowed to roam and find out where things were. I had only a little while to meet the van, so I had to get the information quick. It was going to be painful.

I went to the dining hall, where I knew my division was eating. I had decided to ask my RDC where to go. I walked up to the entrance of the Chief’s Mess and waited at attention. My RDC looked at me, shook his head, walked over to me and proceeded to scream at me for five minutes for having the audacity to approach the Chief’s Mess. When the screaming subsided, I explained my predicament and that I needed to know where to go. Without apologizing for the outburst, he told me where to go, and I went. 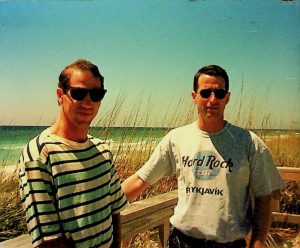 My oldest brother, Rob, and my middle brother, Rus. This was taken about a year or two before Rob died.

My plane went directly to Pensacola, where my brother was hospitalized. He had been suffering from diabetes for decades, and his kidneys were not doing well at this time. With bad kidneys, he was often sleepy. Rob had failed to wake up recently. That also meant that he didn’t take his insulin, nor eat. Because of that, he went into a coma and was found two days later by a neighbor. He was alive, but with brain damage and near the end of his life. When I arrived at the hospital in Pensacola, that’s how I found him. My family was there, as well as Melissa, who had flown out from Atlanta. We mainly sat and talked about Rob while sitting in his hospital room. Eventually, I had to go back to boot camp, so Melissa took me to the airport. I had decided that the Winter Blues uniform that I had thrown together was not appropriate without the neckerchief, so I dressed, instead, in my dungarees, which fit perfectly. And I knew how to wear that uniform.

Pensacola is a Navy town. There are sailors all over. At the airport, a man walked over to me and showed me his Military ID. He said, “Do you see this? I am a master chief. You’re in the wrong uniform, and you need to change.” I told him I was just a Seaman Recruit and didn’t know. He was able to cobble together a uniform from my duffle bag that worked–the Winter Blues uniform under my All Weather Coat (my raincoat). This looked ridiculous, but it was technically acceptable.

While I was changing in the restroom, he started talking to Melissa, my wife. He asked, “Are you his mother?” This did not go over well with her (actually Melissa is seven years younger than I am).

Eventually I went back to Great Lakes. My brother died in a few weeks, but I couldn’t leave bootcamp again. I began getting cards from my mom and from Melissa. I began playing my trumpet in the early morning and in the evening over the loudspeaker system (the “1MC”). I even was allowed (and encouraged by my shipmates) to play on Sunday afternoons–our free time. They asked me to play things like pop tunes and movie melodies–especially Star Wars.

Eventually my division graduated. My other brother, Rus, came up to see the ceremony and to congratulate me. Then I was flown to Washington and reported to the U.S. Navy Band building on the Washington Navy Yard. I had arrived at the place of my work for the next 20 years.

1 thought on “You’re in the Navy now”