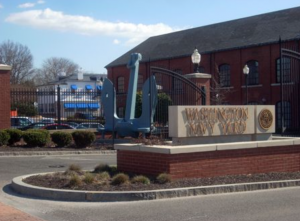 In this photo, you can see the Sail Loft building behind the large anchor

When I arrived at the Sail Loft after bootcamp, one of the first people I met was Mark Cochran, a trumpet player who had studied with Leon Rapier. Of course, being right out of bootcamp, I snapped, “Good afternoon, Senior Chief!” He laughed and explained that, in the day-to-day work of the Navy Band, we used first names–he asked me to call him Mark. The “Sail Loft” is the name for the building where the U.S. Navy Band is located on the Washington Navy Yard.

Melissa was still in the Atlanta area, while I was checking in with the Navy Band. I was staying with a friend from Indiana University–Pat Sarracco, who was in the Naval Academy Band in Annapolis, Maryland. His home was only about 30 miles away, and he let me borrow his truck to drive to Washington. I was at maximum military bearing at this time–ready to stand at attention or salute at a moment’s notice.

For the first few weeks, a mentor was assigned to me. This was a clarinetist named Chris Raifsnider. He helped me to buy all of the uniforms that I would need and to check in with all of the various offices and important people in the Navy Band, including the commanding officer–Lt. Cmdr. John Pastin. He was the one who made the decision to hire me, and I’ll be forever grateful for that opportunity. He now teaches at Rowan University. Lt. JG David Hodge was a junior officer in the band at the time–and he was one of the nicest officers. He now lives in Hawaii and is still working for the U.S. Navy as a Public Affairs person.

When I had my uniforms, I started going to different types of ceremonies to observe–full-honor funerals, bugles, changes of command. But then they took me to observe a “Pentagon Arrival.” This is one of the most high-profile types of ceremonies that the Navy Band did. We marched out onto a field in front of the Pentagon, got in place, played marches and various protocol music for the arrival of a foreign dignitary visiting the Secretary of Defense.

All I had to do was watch the band. Unfortunately, about five four-star generals and admirals passed me, including the imposing-looking Chairman of the Joint Chiefs of Staff, General Hugh Shelton. Snappy salutes, every few minutes. I could hardly pay attention to what the band was doing in the ceremony! Afterwards on the bus, all the members of the band were laughing at me for having to put on such a show.

That first year, I was assigned to a special group that would travel to Sweden for a tattoo festival. A tattoo is a large show full of military bands that march and perform for a large audience–it is the equivalent of a half-time show for a military band. They even gave me a little commercial-style solo to play for the show. It was a fantastic trip for me, going back again to Europe, and it was the first time I had been to Sweden. Here is a video of the finale of that tattoo festival.

Soon after I checked in to the Navy Band, Melissa came up from Georgia, and we moved into an apartment right across the road from Ft. Myer, an Army base that is the headquarters for the U.S. Army Band and for the Old Guard Fife and Drum Corps. We could see the pasture where the caisson horses grazed from our apartment window. These horses were used for the funeral ceremonies in Arlington Cemetery, just to the east of Ft. Myer.

We had our dog and cat from Spain now with us–Pomba and Sabina. We found out how to shop at the commissary on base, we made friends, we found a church that we loved–Saint George’s Episcopal Church in Arlington. We were now back in America and together again.