In addition to hosting the second Historic Division, I had a number of other interesting projects in 2005. One was a tour with the Navy Band to the Southeast. My old teach, Bernard Adelstein, and his wife, Connie, came to our Sarasota concert. I also remember rolling into our hotel in Daytona. There was an unintentionally funny marquee that I was fortunate enough to get on my camera (see below). We also performed in Savanah, Georgia, which gave me an opportunity to explore that really interesting city. 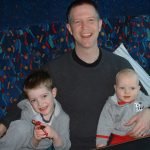 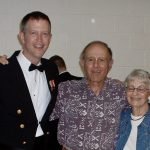 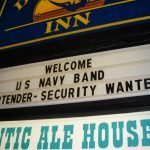 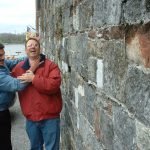 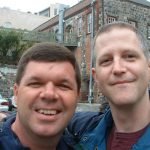 Tim Dickson and me in Savanah 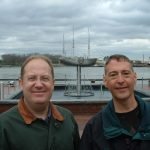 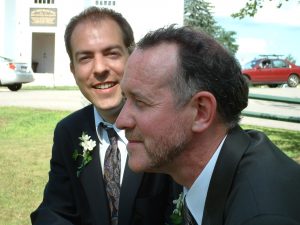 Tim and Jim on their wedding day

We also went to the wedding of our friend, Jim Ross (horn player and conductor in La Coruña–when we were there), to Tim McLoraine in the Boston area. It was a really nice trip for the family–we even went with them on their honeymoon to Cape Cod.

I finished my doctoral dissertation on “Monteverdi’s Symbolic Use of the Cornett,” and I defended it at Indiana University in October. There was a tornado warning, so we did the defense sitting on the floor of the hallway, away from the windows–just to be safe in case an actual tornado landed. During the same visit, I played a lecture recital on the cornopean that I had borrowed from Bob Hazen, about some music in two 19th-c. books, compiled by Philippe Goetz and now owned by Bob. 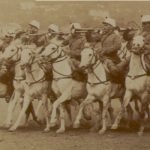 Philippe Goetz, trumpeter in a dragoon regiment, would have played while mounted on horseback, like in this remarkable photo 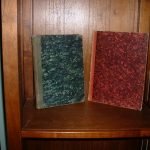 I also played with the Washington Cornett and Sackbut Ensemble in Richmond at the Centenary Methodist Church. The highlight of that concert for me was playing the Giovanni Bassano “divisions” (ornamented arrangement) on Orlando di Lasson’s “Susanne ung jour.”

I also played baroque trumpet with the Atlanta Baroque Orchestra. It was reviewed by Susan Elliott for the Atlanta Journal-Constitution:

“These were splendid performances, characterized by crisp tempos, articulate inner lines, tight ensemble passages, and a generally organic ebb and flow. Highlights included . . . the trumpets of Stanley Curtis and Carolyn Sanders in the D Major ‘Trumpet’ Suite. That the group never lost articulation despite Hsu’s exciting whiz-bang tempo demands was an impressive feat indeed.” (May 10, 2005)