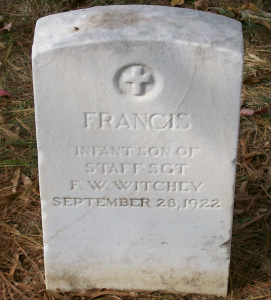 A few weeks ago, I traveled to Ft. Hood in Texas. There is a museum there dedicated to the 3rd Cavalry (it used to be located here in Colorado). I wanted to check out a famous bugle that had belonged to Frank Witchey. Frank was a bugler in the 3rd Cavalry Regiment for his whole career, eventually reaching the rank of technical sergeant. He had played Taps for Presidents Woodrow Wilson and William Howard Taft. In fact, he was the duty bugler for Arlington Cemetery for much of his career. A fellow soldier said that he was at his best in blowing Taps. “Not many people were dry-eyed when he got through,” said the soldier. (source: Arlington National Cemetery website).

Perhaps the apex of his career was sounding Taps at the interment ceremony for the famous Tomb of the Unknowns in 1921. Later, Witchey purchased his military bugle when he retired in 1938, and had it gold plated and engraved with all of the important dates at which he performed. 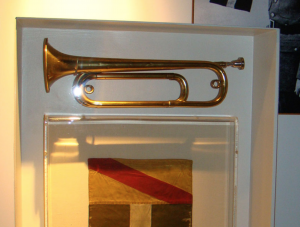 I had written to the curator of the 3rd Cavalry Museum, Robbie Reinstein, ahead of time. We had agreed on a private tour before the museum opened up. He was excited to show the bugle to me, because he had been following Trumpet Journey for a few years (he is an amateur trumpeter). We looked at it for a while–taking some pictures and chatting about its history. Then he asked me if I wanted to play it. I was stunned, but of course agreed, because you don’t get this kind of opportunity often. He unlocked the cabinet, gave me some white gloves and handed me the bugle.

After looking at it for a while, I put it up to my lips and blew. What came out sounded a little off, and I felt a little embarrassed. I tried again, but it was still not right. I had experienced something like this before, and I had an idea. I asked him if he had every taken the bugle’s main slide out. “I thought it would be too risky!” he said. He gave me permission to try, so I gently eased the slide out (I was amazed that it wasn’t stuck!). There was a bundle of paper rolled up inside, so I gently pulled it out. They were music manuscripts. I looked at the top page and saw the title, “Bugle Obligato for Air Force Symphony.” There were other pages with a piano reduction. At the end there was a dedicatory paragraph to Sergeant Witchey. I have decided to share this amazing note:

Dear Frank, I’m so glad that you talked to me about the bugle. Since I have been traveling back and forth between the AF Training Cmd in Texas and my home in New York (so thankful that Gen. Yount gave me this liberty), I had no idea I would meet you on that transport airplane. I have just finished my Symphony Dedicated to the Air Forces, but I realized that it would be truly special if there were an introductory movement for bugle and strings–much like Mahler’s First Symphony sounding so lovely with the “Blumine” movement with solo trumpet. Gen. Yount did not like the idea of the bugle movement, however. On reading through with this piano reduction, his staff bugler couldn’t play it well (at all!!). I eventually tore up part of this score. I will probably re-title it as my Second Symphony. But I did reconstruct the bugle movement from memory, after chatting with you. I hope that you might be able to use it on a concert someday!

—-Yours in music, Samuel Barber

Of course, I took some photos of this incredible find. I can’t post them here, but I have been working with G. Schirmer to get this movement published. It looks like it will take a while to get permissions and everything engraved correctly. In the meantime, I will also be working on a performance with the Fort Collins Symphony to record this important work. We have agreed on a release date a year from now. On April 1st.