Today, let’s take a moment to think about an instrument you probably play infrequently—the flugelhorn. This is potentially a great instrument, and I think we all intuitively understand how wonderfully different it is from the trumpet. 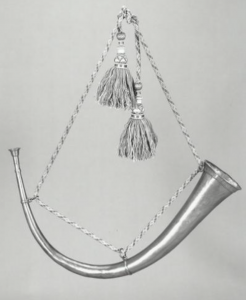 Hunting horn by Crétien, from the end of the 17th-C. The ancestor of the flugel.

A little about its history. Like a lot of brass instruments, the flugelhorn had a non-valve past. It was a hunting horn played by the flügelmeister (the leader of the “wings” of the royal hunt). It had other names such as bugle or buglehorn. It was given keys by Joseph Halliday, becoming known as the Royal Kent bugle. Later, the instrument was given valves, arriving at the familiar shape we know today.

But we trumpeters have been, by default, assigned to the flugel, and it happens to play pretty much the same as a trumpet in terms of its fingerings and basic range. This “plug-n-play” ease for trumpeters can lull us into mediocre results. Let’s take it up a notch!

First of all, when you choose a flugel, sound is the most important factor. It should be velvety. There are many instruments that play pretty well, but they just don’t have that tone. The second factor is intonation. It’s very common for a flugel to play out of tune. Pay close attention to the low register, which can be too flat. There are two bore sizes to consider: large or small. The small, or “French” size is typically about .415″ in diameter, and usually results in a more authentic tone, whereas the larger bore (about .460″) is more-easily approachable by the trumpeter, but can sometimes sound too “trumpety” or have poor response.

Beyond equipment, we have fundamentals, and I’m a big believer in how fundamentals can help shape the sound we want. As trumpeters, many of us have learned the value of mouthpiece playing to prepare the embouchure, and I have written a lot about mouthpiece buzzing in this blog. I would recommend getting your flugel mouthpiece out to warm up on it, as well. It really has a different response. You have to coax the embouchure into the right shape in order to get a reliable response and sound.

In addition, play technical exercises very softly to work on response. In much of the classically-oriented music for flugelhorn, it seems that composers want to write softly for the flugel. This is super frustrating for me as a trumpeter, because it exposes my worst shortcomings. Also, work with slur exercises, just as you do on the trumpet, to get the right air flow.

Finally, if you have every heard a flugel midi patch for a music writing software like Finale, you might be amused at how out-of-tune the sample sounds. We can do better: practice with the tuner. You may want to purposefully work with lip-bending exercises to be able to put the pitch where it needs to go. Like everything on this instrument, lip-bending feels different than on the trumpet.

Good luck with your flugelhorn!