Today would be the 85th birthday for one of the truly great trumpeters of our era, Edward H. Tarr. He died in March of last year, so his loss is still a fresh wound to us all. He was a great trumpet player, a leader among our ranks, and a monumental mind. If you play trumpet literature–especially baroque trumpet music–you have probably played an edition prepared by Tarr.

He was an American who developed into a great trumpeter under his three main teachers (and there were many other influences): Don Pratt, Rogeer Voisin and Adolph Herseth. You probably didn’t know that he developed a keen interest in jazz early on. He actually formed his own dance band and traditional jazz band when a teenager (there’s the leadership already apparent).

The critical point in his life came when he received a Rotary scholarship to study musicology under Leo Schrade in Basel, Switzerland. He stayed in Europe and married Madeleine Fiorese, a Swiss woman, having two children with her: Natalie and Philip. I actually met Philip Tarr when I was living in the DC area. He was a doctor doing  research for a local hospital. But he was also a fantastic baroque timpani player and helped me with some German translations. Philip went back to Europe shortly after this time.

Ed became interested in historic instruments while in Switzerland: first the cornetto and then the baroque trumpet. He studied and worked with a pioneer of the baroque trumpet, Walter Holy (who was also the teacher of my baroque trumpet teacher, Friedemann Immer). All this while becoming a (modern) trumpet professor in Cologne and the principal trumpet of the RAI orchestra in Rome. He then began to teach baroque trumpet and cornetto at the Schola Cantorum Basiliensis and at the Music Academy in Basel (both positions from the 1970s until 2001). 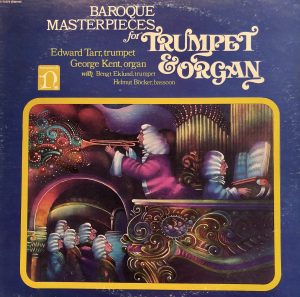 He began to release important recordings in the late 1960s, recordings which helped to launch his solo and chamber music career. His Edward Tarr Brass Ensemble won a Grammy award in 1968. It was Tarr’s recordings with organist George Kent (in the mid-1980s) that were so influential to me.

He eventually began to collaborate with and then married Irmtraud Krüger. I actually had the honor, later in 1996, of playing with Irmtraud, who is a noted author on performance anxiety, at the Altenburg International Baroque Trumpet Competition in Basel. She was the accompanist (on a continuo organ) for the first round. That is also where I met Ed for the first and only time in my life. At that time, he was really at the apex of his career, having recently founded the Trumpet Museum in Bad Säckingen, Germany (right across the border from Switzerland). He had just won the Christopher Monk award from the Historic Brass Society. Being an admirer of language ability, I was really impressed by him at this conference, as he spoke French, German and Italian with the many other trumpet greats at the conference.

Although Ed Tarr was not my teacher, he corresponded many times with me over the decades, helping me to solve research inquiries and shaping my views of trumpet playing and even shaping my career.

I had wanted to do a blog interview with him for many years, but I never was able to finish it. However, I would like to share some preliminary questions he answered for me, as I was getting organized for this interview. In the following three questions, I wanted to get a feel for how comfortable he was with these potentially controversial topics.

SC: Talk about your expatriate status and why you might have chosen to live abroad.

ET: I got a Rotary scholarship to study with Prof. Leo Schrade (ex Yale) in Basel, and it’s strange, but the moment I set foot on European soil (in N. Germany), I had the feeling I would stay.

SC: Tell me about your relationship with some of the other pioneers of baroque trumpet playing—especially Don Smithers

ET: For a while it was shaky with Don Smithers because I’d reviewed his dissertation and criticized a few things slightly, but we’ve gotten over that. It has always been excellent with the recently deceased Reine Dahlqvist.

SC: Talk about how you established the Trumpet Museum and your relationship to it.

ET: It was founded after a joint exhibition by the two collectors EHT and Ernst Buser in 1979 and the mayor, Günther Nufer, said to us that it would be wonderful to have a permanent exhibition. Ernst thereafter sold his collection to the city and suggested that I be its curator (later director). I live in Rheinfelden, which is exactly in the middle between my two former places of work, Basel and Bad Säckingen. I have a very good relationship with my successor there, Johannes Brenke, and we are constantly in touch. (He keeps me informed about new acquisitions so that I can keep my online catalogue complete.) A few months ago I was present there for three days to help celebrate the 30th anniversary of the Museum’s founding in 1985.

I am very grateful for the memories that I have of Ed. He thrilled and inspired me throughout my life, and I hope he continues to inspire future generations of trumpeters.