Note from editor: this post is directly from Julian Zimmermann, one of my favorite natural baroque trumpet players on the earth today. He sent me this by email last night, and I lightly edited it. He is planning a recording project which will try to authentically recreate some cantatas by Telemann with trumpet, by not only playing them on a natural baroque trumpet, but also by playing with a large organ (not a “positive” or small “continuo” organ). For this project, he will play with an original church organ by Paul Prescher built in 1683 (in Niederschönenfeld, Bavaria).

JZ: We don’t know much about the players that played trumpet for Georg Philipp Telemann in Hamburg. There was no Gottfried Reiche or Valentine Snow……or was there? There was a man, who died one year after Telemann… 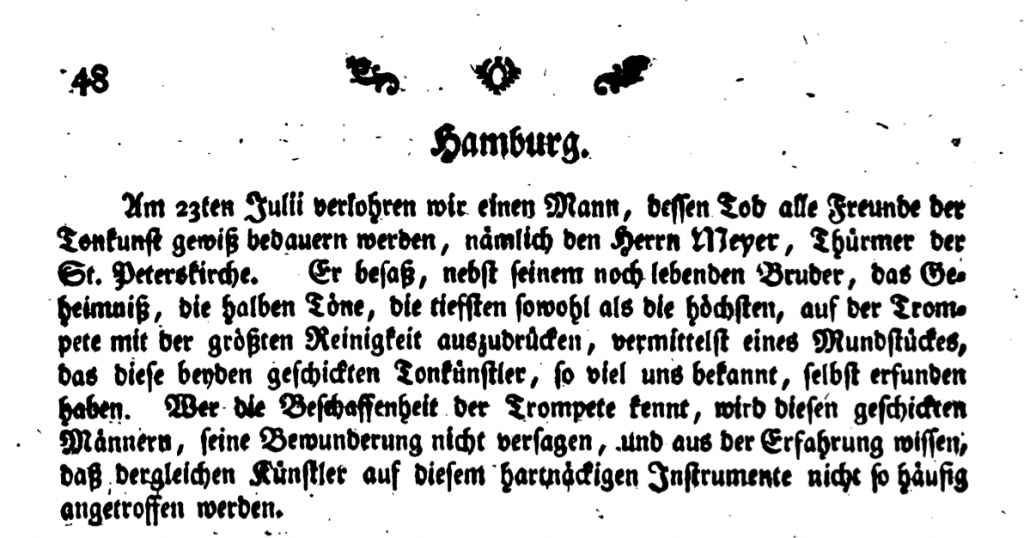 “On the 23rd of July (1768) we lost a man whose demise all friends of music will certainly regret, namely Mr. Meyer, a Thürmer of St. Peter’s Church. Together with his brother, who is still alive, he possessed the secret to express half-tones, the deepest as well as the highest, on the trumpet with the greatest purity, by means of a mouthpiece which these skilled musicians, as far as we know, invented themselves. Those who know the nature of the trumpet will not fail to admire these clever men and know from experience that such artists able to play this stubborn instrument are not so often encountered.”

Editor’s note: Thürmer are brass ensemble players, who played from the church tower.
It is certainly possible that Mr. Meyer performed some of the Telemann-Cantatas that I will record.
If you would like to support this project, please consider donating to my Kickstarter campaign.
https://www.kickstarter.com/projects/naturaltrumpet84/the-harmonic-natural-trumpet-die-harmonische-naturtrompete?ref=user_menu
No tags for this post.