It’s important to remember during the Tokyo Olympic games this summer, that in ancient games, starting in the 96th Olympiad (396 BC), the trumpet was introduced as a competitive discipline. 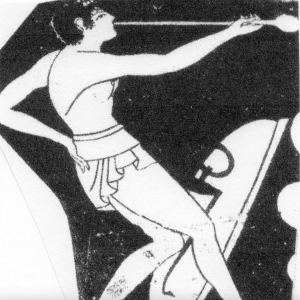 The trumpet, called the salpinx in Greek, had already been used to announce the winners of the various athletic categories in prior games, but starting in the 96th Olympiad, the games began with a trumpet competition, so that the winner(s) of this contest would be the official trumpeters during this latter part of the games. I can imagine that this helped to remove any bad trumpeters from the important winners’ ceremony!

We don’t know exactly what the criteria were for judging trumpeters back then, but among the most important factors were the rhythmic patterns of the trumpet calls and the clarity and loudness of sound. Also a possible factor was how long a contestant could hold a tone.

In his excellent ITG Journal article from October of 2006, Nikos Xanthoulis gives us a lot of interesting research into The Salpinx in Greek Antiquity. He writes that Archias from Yvla, an Olympic trumpet contest winner, also won in the Pythian games where an image of him stood with the epigram:

Accept this statue with certainty benevolent Phoebus,
The state of Archias from Yvla son of Eucles,
Who proclaimed thrice the Olympic competition
Without any volume accessory attached to his salpinx

So, from this we can surmise that volume was a premium quality expected of an Olympic trumpeter, although I would like to know what sort of accessories could have been attached to a trumpet!

Xanthoulis theorizes that, from the original Greek, an emphasis is on “the strength of breath to support the duration of sound.”

He goes on to mention a few more specific Olympic trumpet medal-winners: Herodorus of Megara, a very tall man (more than 7 feet tall) who could eat five pound of bread (about 6,000 calories) and 20 liters of meat (about 27 lbs.)! He could also play two trumpets at once. Herodorus won ten consecutive games (40 years!) and he helped win an actual battle with his playing.

Xanthoulis also mentions a female salpinx player, Aglaisi Megakleous, who also was a good eater (apparently this was an important trait for trumpeters) and played with a mask and helmet. I wonder if this was to conceal her identity?

This small sliver of Greek trumpet history will hopefully inspire you to play strong, long and clear during these Olympic games happening in Tokyo!