I received a message this morning from my teacher, Friedemann Immer, the great German baroque trumpeter. He pointed out that today was HIS teacher’s birthday. Walter Holy would have been 100 years old today. 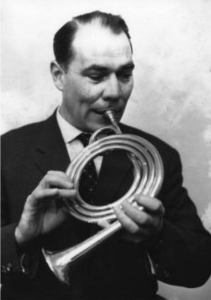 Holy was ground-breaking in that he was the first to really play on the valveless baroque trumpet in modern times. Trained as an orchestral trumpeter, like nearly all trumpeters in Germany in the 1940s of that time, he became principal trumpet of the Hanover Opera and coprincipal of the West German Radio in Cologne.

He had studied baroque music under Hans Hoffmann and Adalbert Schütz, so he had some familiarity of this music that set him apart, and he became curious about playing on a valveless instrument that tried to replicate the sound of the original instruments played in the 17th and 18th Centuries. 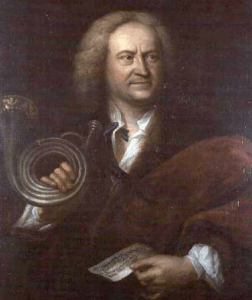 Taking the famous portrait of Gottfried Reiche by Haussman as a model––with his distinctive coiled instrument, called in German a “Jägertrompete”––instrument designers Otto Steinkopf and Helmut Finke made a reproduction. They added three vent holes that corrected several “out-of-tune” partials like the 11th and 13th (the F and A). Holy began to play this instrument, the first commercially successful reproduction in the 20th Century.

Holy was quite successful with this instrument and toured all over the world in the early 1960s. He worked with Edward Tarr and the Edward Tarr Trumpet Ensemble. He recorded under his own name and he famously collaborated with Nikolaus Harnoncourt and the Concentus Musicus Wien on a recording of Bach’s Brandenburg Concerto No. 2.

His work on the baroque trumpet influenced many trumpeters of the subsequent generations, such as Edward Tarr, Michael Laird, Detlef Altenburg, and, perhaps most importantly, his student Friedemann Immer. For his contributions, the International Trumpet Guild awarded him with the “Johann Ernst Altenburg” Award on January 7, 1996 in Bad Säckingen, Germany. He died in 1983, survived by five children.