We started to get used to life in Amsterdam. Melissa and I have always had a dog, and Amsterdam was no different. As I mentioned yesterday, she flew over with Béla, our vizsla, into Schiphol airport. Béla was an amazingly-good urban dog. He was probably the best “heeler” I’ve ever known. You could easily walk with him, without a leash, on a busy sidewalk (we did not do this often, but it was possible). He liked holding an umbrella in his mouth. 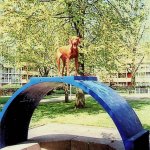 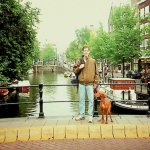 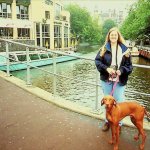 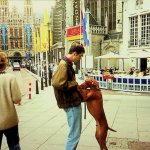 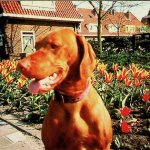 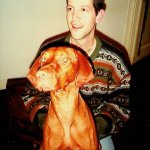 We had very little money, so we almost always cooked our food. To get our food, sometimes we shopped at Albert Heijn (a supermarket), but most often we went to the outdoor Albert Cuyp Market. This market was open almost every day, even in the rain. Since we had only one bicycle between the two of us, I would usually empty out my soft trumpet case made by Altieri (it was like a backpack), and ride over to the market. When the trumpet case was filled with our groceries, then shopping was over. I remember we especially enjoyed getting loose tea for the cold months.

Since we began dating each other, Melissa and I have been vegetarian. In Amsterdam, the McDonald’s offered a “groenteburger” (vegetable burger), which we tried and liked. I’m not sure why McDonald’s in the U.S. has not offered this option, but I think they would get more business from tree-huggers like me.

One special treat. When we were hungry, I would go to the “avondwinkle” (a convenience store open in the evening) and get a “gevulde koek.” This was a cookie filled with almond paste, and just amazing in flavor. The Dutch definitely know how to cook with almond flavor.

We had a camera (old-fashion film, of course), and I remember going out to take some black and white photos. I am not great at scanning, so the ones you see here are not as nice as they should be. 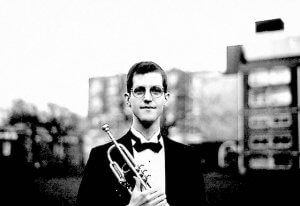 Melissa and I had just gotten married. I had received a Fulbright scholarship to study baroque trumpet in the Netherlands–in the Sweelinck Conservatorium, which used to be located in the old Van Baerlestraat building (one of those beautiful buildings with enormous windows).

I went ahead of my new bride to get an apartment in Amsterdam, which is a heavily-populated city. I already knew a violist from IU who was living there, so I stayed with her for a couple of weeks while I searched for a place for Melissa and me. I found an apartment to sub-let from an American violinist named Claudia Saslow. It was near the Zoo in the old part of town.

I was participating in the first meeting of the year at the conservatory when Melissa’s plane was about to arrive. I was supposed to play a trumpet ensemble piece for that meeting, but I couldn’t because of the timing of that arrival. That’s when I made the first of many funny European language mistakes that I made when living overseas.

I had to excuse myself from the fanfare performance. I explained to the director of the conservatory that I had to pick up my wife at Schiphol Airport. I said, as a college-educated native English speaker, “I have to meet her at the airport, because her plane already arrove.” The director, an English-as-a-second-language speaker replied, “Isn’t that supposed to be ‘arrived’?” If you ever travel to the Netherlands, you will meet a lot of nice people who speak English perfectly well, and perhaps better than most Americans. 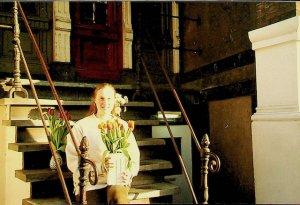 Melissa in front of our apartment

I did meet Melissa and our dog, Béla (a vizsla), at the airport, and we moved into our little apartment on the Plantaage Kerklaan. It was over a bakery, so we had the wonderful aroma of a Dutch bakery every day.

Friedemann Immer’s baroque trumpet class was different than an American trumpet studio. It met only once a month for about three days, when he traveled to Amsterdam from Cologne. During that time, we met as a studio for about six to eight hours during the day. Every day, we each had a “lesson” in front of the class. Most of the lessons were in German, but mine was in English. German or English was not a problem to the students, because Dutch people are language masters. They usually can speak English, German, French and perhaps one other language. Nevertheless, there were students from other countries in the class, too. I remember some students from Germany and France. 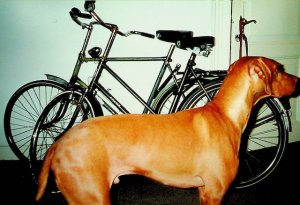 Our dog, Béla, in front of our two omafiets. Photo taken right before mine was stolen!

One of the first things Melissa and I did was to buy bicycles. We had heard that Dutch drug addicts stole them frequently to sell for drug money. Instead of buying one of these, we were determined to buy legitimate used bikes, which we did for about 100 guilders each (about $80; they were not using the Euro, yet). We liked our “omafiets” (literally “granny bike”). Of course, we had locks for them, and we parked them in the rack just outside our apartment. And, of course, mine was stolen within about two weeks. We were poor, so we couldn’t afford to buy another replacement bike for me, so we shared Melissa’s bike, and we didn’t leave her bike out on the street at night anymore.

About seven months later, while walking late at night in a park, a drug addict approached us and asked if we wanted a bike for fifteen guilders. I said yes. I decided to do things the Amsterdam way.