Last night I arrived in San Antonio, Texas. I’m here for the 2022 International Trumpet Guild Conference this week. I’m so excited–so much that I thought it would be good to get back into blogging and sharing that excitement! 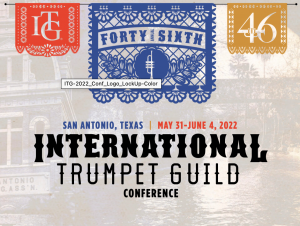 I had a long list of things to pack yesterday–flugelhorn for my ITG New Works recital performance of my composition, Night Fall (Thursday, June 2, at 11am local time) and my baroque trumpet (to play with the Kentucky Baroque Trumpet Ensemble–with my old teacher from when I studied in Europe–Friedemann Immer). I packed my regulation G/F bugle to play on Britten’s Fanfare for St. Edmundsbury on that same baroque trumpet recital. I packed my mouthpieces. I packed my little “PageFlip” pedal that I use with my iPad. I packed all my charging cords.

This morning, I looked at my flugel and its yucky surface. Oh no–I forgot my silver polish! What could I do? I didn’t want to perform on a tarnished horn! I had an idea.

If you ever experience this problem when traveling, get an old sock (the one you wore the previous day) and wet it under the sink. Put a little TOOTHPASTE on your sock! Rub this on your horn, and then wipe clean with your regular cloth you keep in your case (or maybe the hotel towel). Your toothpaste has some gentle abrasives that will work wonders on silver plating. Would you like to see? Check it out! 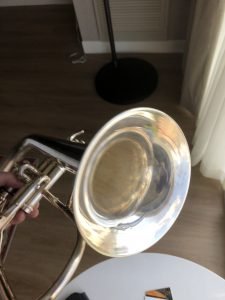 Flugel before (front of bell) 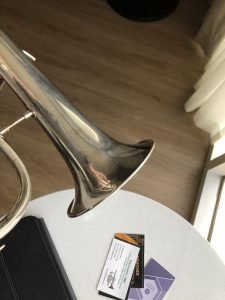 Flugel before (side view) 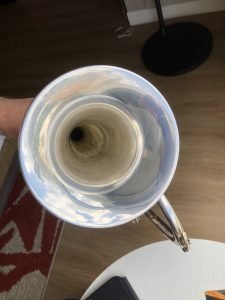 Flugel after polishing with toothpaste (front of bell) 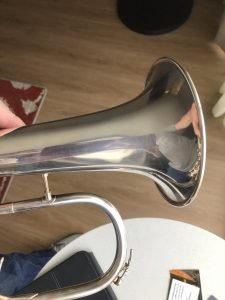 Flugel after polishing with toothpaste (side view)

Oh–and please say hi if you are here also in San Antonio! Happy traveling and playing!

I remember when I was five that I would wait on the steps of a neighbor that taught piano. When she came out, I asked her if I could take lessons. Eventually, she worked it out with my mom, and I got piano lessons. Even at that young age, I really wanted to be a musician. Here are some quotes that remind me of that time.

Writing music is my one and only passion and joy.
––– Wolfgang Amadeus Mozart

My Dear Reader: – I have loved the Cornet from my earliest infancy and always had a longing to become a Cornet player. About five years previous to my becoming the proud owner of a Cornet, I procured a mouthpiece which I kept constantly pressed to my lips. I begged and prayed of my father to buy me a Cornet, my chosen instrument. I kept on begging and, after five years persuaded him to accede to my long pleading. He went to an auction room and bought a Cornet for fifteen shillings English money, (about three dollars). Now, considering a good, plain brass Cornet by a first class maker ought to cost about fifty dollars, my readers can readily imagine what kind of an instrument mine was, bought at a sale for a paltry three dollars. Of course I had no instructor, so I began to blow in my own fashion, using my cheeks and puffing them out as though I had apples in my mouth, never dreaming that it was necessary to use the tongue. The concequence was almost fatal to me. I nearly blew myself into consumption. I had to have a physician’s advice and after two or three months good treatment, I soon recovered. A short time after, I was adviced to join a band by many people who believed I would become a good player. A very fine Cornetist in London took a fancy to me, and offered to give me a few lessons. I accepted his offer. He gave me six lessons, and finding an apt pupil he agreed to give me six more, but my misfortune began thus early. He was in a Military Band, and on the eve of giving me my second six lessons, he had to leave the city with his regiment. I nearly broke my heart for I had just begun to know how to blow properly. What could I do without an instructor and only just had my first six lessons. He took pity on my woe-begone appearence and wrote me about twenty progressive exercises, and told me to work hard at them. I did so for at least ten or twelve hours a day, and I am thankful to say that I made great strides through practicing nothing but those studies, which not only made my lungs strong but gave me a strong embouchure.
–––Jules Levy, renowned cornet soloist